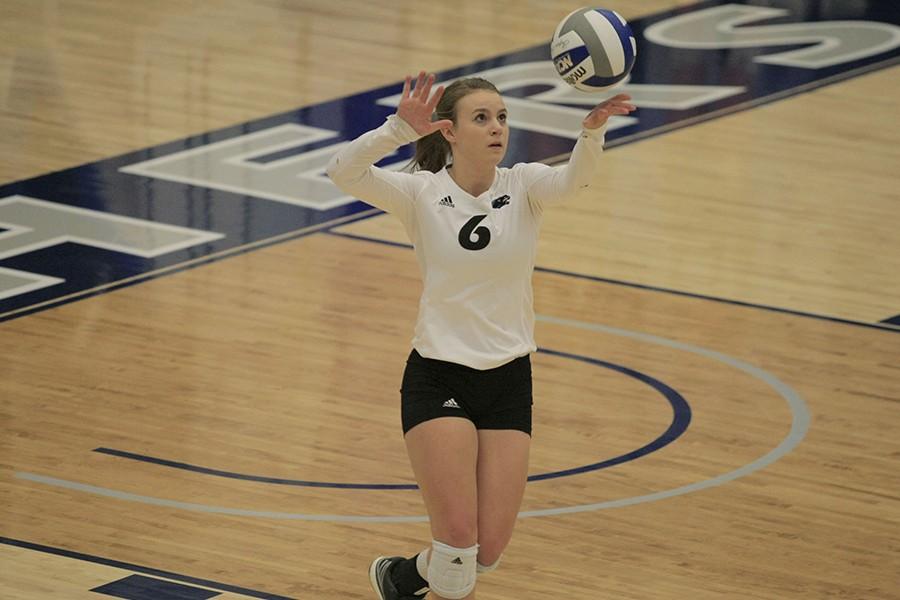 Senior libero Stephanie Wallace prepares to serve the ball against UT Martin on October 16, 2015 in Lantz Arena. The Panthers won 3-1.

The Eastern volleyball team has won five matches in a row heading into its matches against Southeast Missouri and the University of Tennessee-Martin this weekend.

The Panthers will start the weekend off by taking on Southeast Missouri on Friday and finish it by taking on University of Tennessee-Martin on Saturday.

SEMO has a 4-6 record in Ohio Valley Conference play.

“Obviously they have a couple good players,” coach Sam Wolinski said. “Number 14 on their right side, number 16 in the middle, so we’ve just got to be able to contain them better than we did the first time around.”

The Panthers had five set match with SEMO a couple weekends ago that ended in Eastern’s favor, but Wolinski said they will need to remain consistent.

“Again, just being consistent in our play,” Wolinski said. “I think our side-out game will be really huge and if we can stay in that 65 percent range, that’s going to help us defeat SEMO.”

UT-Martin is at the bottom of the conference with a 3-7 record. Eastern defeated the Skyhawks two weeks ago in Lantz Arena.

“Their outsides are kind of what make them run,” Wolinski said. “They have a lefty that plays on the outside, which is unique, so we just need to defend that and take care of business and I think we’ll be in good shape.”

After playing at Lantz Arena for two consecutive weekends, the Panthers are back to traveling and playing in their opponents’ arenas.

The Panthers will have an hour-long practice in SEMO’s arena Friday morning to get comfortable in the facility.

“The biggest thing is you get done playing one match and then you have to hop on the bus and travel to your next site,” Wolinski said. “It’s a quick turn around.”

Senior libero Stephanie Wallace recorded a season-high 30 digs last weekend in the match against Austin Peay, but everyone has been playing well, Wolinski said.

“A lot of our players have been doing such a great job,” Wolinski said. “Stephanie Wallace has been doing a great job in the back row. 30 digs against Austin Peay last week. She’s just been solid. She’s been a rock back there.”