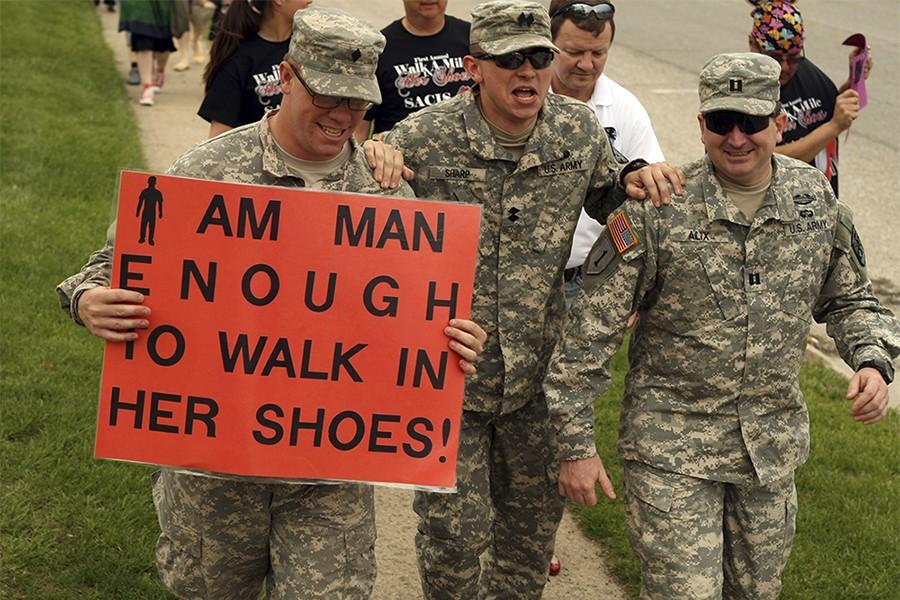 Nick Fetrell and Dan Alix hold their fellow ROTC member, Craig Sharp as he struggles to complelte a mile in heels during Walk a Mile in Her Shoes Sunday. ROTC was a sponsor of the event, which was hosted by Sexual Assault Counseling and Information Servies (SACIS) on April 27, 2014.

A social service agency known to many on campus is facing hardships because of the current budget impasse in the Illinois government. The Sexual Assault Counseling and Information Service relies heavily on state funding and without knowing the budget, the agency is sorting out their next steps.

This is the first time the agency has been faced with a threat of future closing.

Erin Walters, the executive director of SACIS, said the non-profit rape crisis center offers free and confidential services to those impacted by sexual violence. She said SACIS runs off of federal funds supporting their services, including grants. Walters said the agency has used up all their reserved funds to carry them along and that the state is supposed to reimburse them for their expenses.

Right now, the state has not given SACIS their reimbursement payments so SACIS has been running their reserved funds and taken out a loan to keep their services going. Without the federal dollars the agency would be close.

“I’m happy to report that we did receive enough federal funds to allow us to continue for a longer period of time,” Walters said. “Right now, I do know that we are guaranteed services through the month of November and could potentially cover our expenses through December.”

Walters said she does not see SACIS having any additional resources to support the services beyond December. She is working with the board of directors to determine if there are steps to take so they can make small changes to avoid closure.

When SACIS began there were volunteers. It was not until 1983 when SACIS started paid positions. Walters said she has tried to consider giving her staff furlough days, or reducing work hours, but she does not want it to get to the point of laying off her staff.

“These are very incremental changes that would not have as negative an impact as if we were to have to close our doors,” Walters said.

“I can’t believe they would hold our state hostage and put things in jeopardy like higher education and advocacy for victims of sexual assault or domestic violence, or children,” McLean said. “I think they have no conscience when it comes to that sort of thing.”

McLean said the people of Illinois elected Gov. Bruce Rauner, a billionaire, and he got a foot in the door because of how the previous governor ran things. He said the rich are still getting richer so now it seems the state’s workers are balancing everything on their backs.

“If education doesn’t matter, I don’t know what matters to them anymore,” McLean said. “He better get in and do what damage he can because he can’t turn his back on the union employees and state workers and think he’s going to get re-elected.”

McLean said SACIS provides a resource the community needs. He said a victim’s first thoughts should not be where to go or how much to pay.

Walters said it is sad because the budget deficit has existed for years and it has not magically appeared. She said she cannot venture a guess on what caused it, but she knows who did not cause it.

“It was not the survivors in this state, it was not individuals with disabilities, it wasn’t elderly services, it wasn’t children’s programs, nor domestic violence survivors,” Walters said. “It wasn’t all of these social services that caused it, yet it feels like they’re the ones who are suffering the most.”

Abbey Haughee, a conditional relief agent, said she supervises sex offenders. Haughee has worked on SACIS’s board in the past and said she knew SACIS was in a difficult position, but she was not aware of how dire the strain would be. She said a world without SACIS seems unfathomable.

“We would be pretty 1977,” Haughee said. “It’s ridiculous that we’re even having the conversation that they might close, it should be something that people should immediately be stepping up for, our state legislatures should be stepping up.”

Haughee said that something has to give when it comes to the budget, she said it is pitiful the state has gone so long without a budget.

Walters said she is happy SACIS is open now, but it hurts to see the budget impasse having such an effect on the most vulnerable residents in the state.

“I am happy that our doors are still open,” Walters said. “But I know that can change and for some other service entities they have been closing doors and some programs have been pulled completely, so I feel very fortunate that we are still going.”