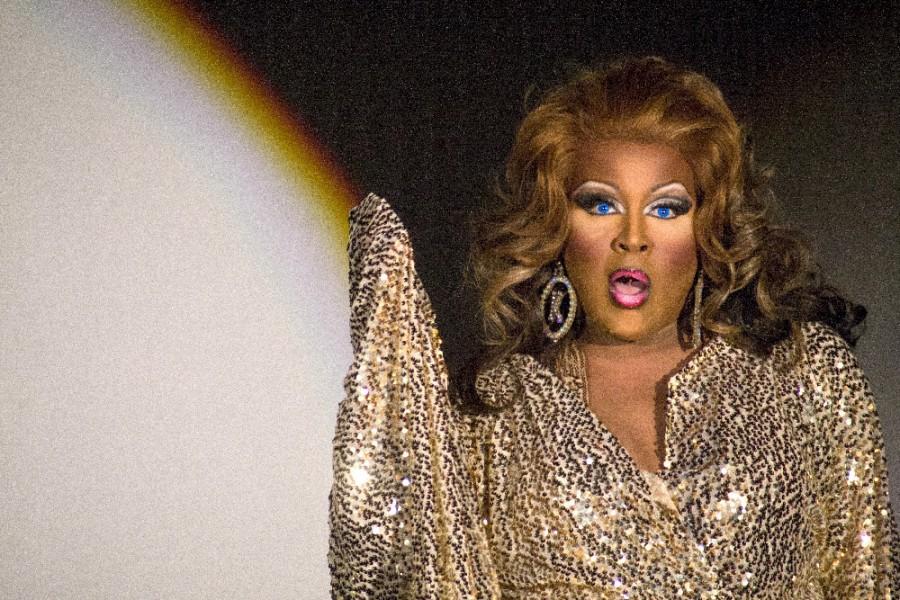 Kelasia Karmikal, of Champaign, Ill., performs a routine in a self-made gown at the Diva Drag Show: Greek Gods and Goodesses on Monday in the Grand Ballroom of the Martin Luther King Jr. University Union.

Posed in a white and jeweled flowing gown, Kelasia Karmikal, lip synced music while swaying down the T-shaped runway in the Grand Ballroom of the Martin Luther King Jr. University Union.

Walking bit by bit in a gown with a slit up the thigh, Karmikal opened her, what looked to be, a gown to reveal it had floor length sleeves, which she whirled around in down the stage.  With one last lingering look at the audience, Kalasia blew a kiss to the audience and took her leave.

Karmikal walked enticingly down stage after revealing the last trick up her long sleeve, another outfit. She relieved herself of the elegant gown and presented the second outfit, underneath her first one. As the show went on, all of the queens wowed the crowd with their changing outfits and fierce stares.

This year’s Diva Drag Show included several performances from different queens across central Illinois. These queens have been performing at Eastern for more than 10 years.

Clad in a pink and black rhinestone dress, Ceduxion Carrington, the animated emcee for the night, kicked one heel in the air as she went into a cart wheel and ending in a split, received a loud cheer from the audience.

The silhouette of Calexus Carrington-Steele appeared as she walked down the runway preparing to twirl her purple shimmering dress for the crowd.

Calexus’s second performance got loud hoots and hollers as “Hit the Quan,” by iheart Memphis, sounded through the ballroom.  She danced downstage and after collecting money from the audience, Calexus threw her earnings in the air and swung her brunette hair wildly.

Throughout the show Ceduxion chimed in to amuse the crowd.

“If you come in the drag dressing room, you’ll never be the same, I promise you,” Ceduxion said.

Along with the humorous chimes the emcee offered, she commented on some societal conflicts going on as well, including marriage equality in all 50 states. She asked the crowd who were either LGBT parents or parents of a LGBT child.

“Having a gay child is not the end of the world,” Ceduxion said. “ I know straight friends that have messed up homes.”

The queens and king kept their energy up even with their long performances.

In every performance each queen and this year’s king started on stage and lip-synced. By mid-performance, they were in the crowd collecting offered money, audience members or the crowd would bring the money to them.

Amaya St. James got a good reaction from the crowd with her flirtatious antics. Amaya performed a few lap dances throughout the show earning loud hoots and hollers from audience members.

In Amaya’s first performance she sported bouncy red hair, a lime green shimmering dress and knee-high boots. From collecting money mouth to mouth from audience members to shimmying down the aisles of the crowd, Amaya kept the crowd rowdy.

Nearing the end of Amaya’s performance, the queen stood tall on a seat between audience members and had them clap along to Beyonce’s “Love on Top.” Afterwards Ceduxion referred to Amaya as Amayonce’.

With a new themed show came a somewhat new addition to the queens, a king.

Justin Zane appeared in front of the crowd with battered jeans and a black plaid shirt. Lip-syncing to the Flobot’s “Handlebars.” Justin earned hoots and whistles as he rapped the song to the crowd.

Although this is not the first time Eastern seen a king at the Diva Drag Show, it has been a while since one has performed.

Maece Bresnahan, a sophomore education major, said the king was the best part.

“I’ve been to a drag show and there was never king representation and I enjoyed it because it brought diversity to the show,” Bresnahan said. “It added something that was lacking in previous years.”

Kicking in the air and swinging her huge Afro came the mother of the house, Chanel Carrington.  The “drag mother” of the house grooved to a funky beat as she made her way down stage to audience members. Chanel sported her untamed, big styled hair during all of the acts.

Sheldon Aaron, a graduate student, said the event brought another form of diversity to campus.  Aaron said this is a culture many people are not aware of.

“It brings the capability of experiencing a different culture for some of the students who one never interacted with LGBT people,” Aaron said. “Or to someone who has never witnessed a drag show.”

Ky Martin, a sophomore art major, said each year the show brings an experience people in the town or campus usually do not encounter.

“A lot of people aren’t used to seeing drag and it can be an eye-opening experience,” Martin said. “It allows people who typically wouldn’t feel comfortable in a queer space to have fun and realize it’s no different from any other show.”

One performance replicating a famous celeb was from Chanel, who dressed in an outfit resembling Beyonce’s 2006 BET Award performance of “Déjà vu.” Another queen who brought out their inner celeb was Kalasia Carmichael, who based a majority of her performance on Janet Jackson songs.

“It’s more like an art form,” Amaya said. “ To me it’s like a celebration of art of a woman, and a lot of times we try to emulate celebrities.”

Proceeds after the queens and king have been paid will go to SACIS.