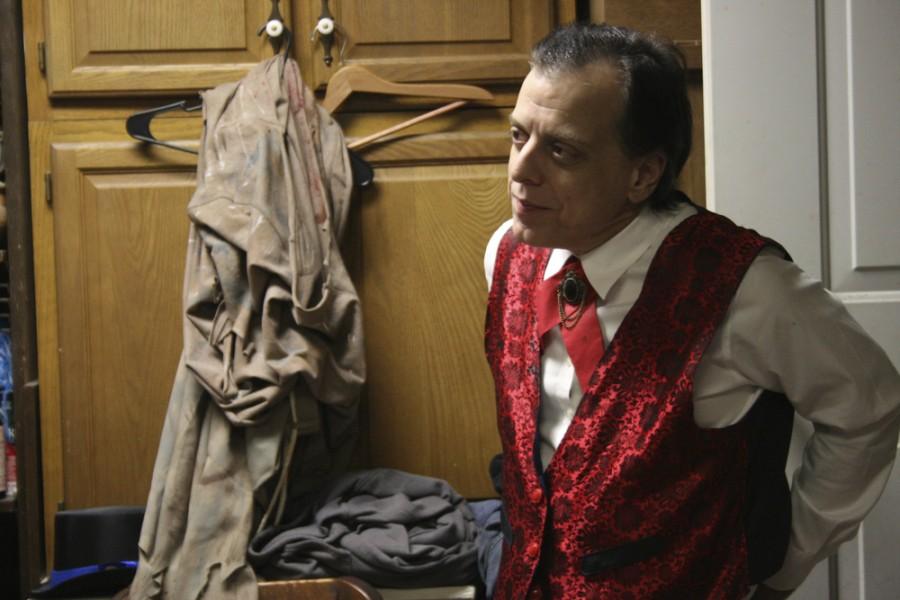 Michael Salem, the actor playing Count Dracula, gets into character in the green room.

High-pitched screams filled the air while characters were being killed during the Dracula show put on by the Charleston Alley Theatre.

The Charleston Alley Theatre held their closing show for their fall show, Dracula, Monday at the theatre.

The show was directed by Tony Cox, treasurer of the theatre board, and took roughly eight weeks to set up completely.

Linda Bagger, vice president and historian of the board, said the show took a little longer because it was a heavy tech show.

“(Cox) needed a lot of extra time, a lot of props, and a lot things like that, so eight weeks,” Linda Bagger said.

Cox said he likes that the show has dark comedy, because there are not many shows that are horror plays about horror stories.

“This is one of the few plays I’ve found that I really, really like,” Cox said. “Its well written, its very close to the novel, (Steven Dietz) did a wonderful job putting together the play, that’s why we did the same version we did last time.”

During the play, you see Renfield, played by D. Craig Banyai, eating a rubber rat at the beginning, before you see him in the asylum.

All through the show, there were different emotional scenes during the charcters, as well as some violent times, such as when Dracula kills Renfield.

Dracula was not only held at the Charleston Alley Theatre. It was a travelling show to Mattoon.

Dracula was the second show put on by the theatre that has been a traveling show, which means they took the show and their set to the bus and train depot in Mattoon and performed shows for audiences there.

“Mattoon is wonderful, and they’ve been so nice to us, and we really enjoy going,” Linda Bagger said.

Linda Bagger said the lighting system was different, and that was one of the troubles the show faced while it was in Mattoon.

“Their lighting system is all LED and its all computerized, and really nobody knows how to run it really well,” Linda Bagger said.

When the theatre went to Mattoon, they had to take some of their lighting and sound equipment, along with their stage, so the show would be able to run more smoothly.

When the theatres has shows at home, the “techs” run the show blind because the system controls are behind the brick wall that sits behind the set.

Linda Bagger said the techs that run the system have to rely on sound cues in order to be accurate in the shows.

“It is awesome, but it’s difficult,” Linda Bagger said. “But we’ve been doing it for 25 years.”

Melissa Akins, a volunteer for the theatre, said she likes the people they meet through the Mattoon shows.

“The audience they get over there is different too and they’re also really nice,” Akins said. “Its nice having fresh people sometimes.”

Demetrius Johnson, playing Dr. Seward Head of the Lunatic Asylum, said this was the first show he ever acted in.

Johnson said the theatre offered him the part after he arrived late to an improve night.

“I didn’t choose Dracula, they choose me,” Johnson said. “I was gonna try for a small part, maybe as an attendant or something, and they were like ‘no, no we’re going to give you a main role’.”

The show, quite literally, ended with a bang, when after the cast had come out, two flash boxes exploded and Dracula emerged from the coffin he was originally in.

Duke Bagger, president of the board and the actor who played Professor Van Helsing, said he enjoys setting them off because of audience reaction.

“I told you, I had another surprise coming,” Duke Bagger said.