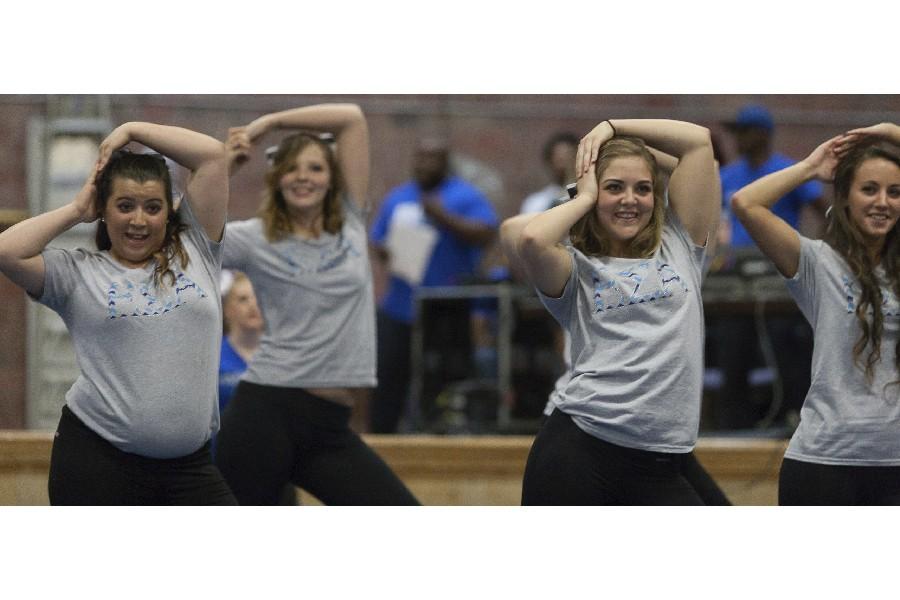 Members of Epsilon Sigma Alpha participate in the "Yell Like Hell" pep rally on Friday in McAfee Gym. ESA was the overall winner among the RSOs and Greeks.

McAfee Gym was packed as students cheered for their Greek groups and registered student organizations at “Yell Like Hell.”

The teams were judged based on their commitment, fundamental skills, group technique and overall effort.

The 12 groups competed together, with sororities and fraternities pairing up.

All around the gymnasium hung posters from different halls and organizations.

The Panther Marching Band started off the night with the “Fight Song” and continued with contemporary songs like “Uptown Funk” and “Uma Thurman.”

The Pink Panthers and cheerleaders then performed.

Homecoming Princess Astoria Griggs-Burns said she has seen a lot of school spirit during Homecoming Week, and Homecoming Queen Kelsey Hosea said everyone has been showing her love that week.

“Everything I went to has been amazing,” Hosea said.

One team, Alpha Phi, even danced to Nirvana’s “Smells Like Teen Spirit.”

Some of them incorporated a theme in their acts, such as Kappa Delta sorority and Sigma Alpha Epsilon, a fraternity who made theirs “Boys vs. Girls.”

All of the teams cheered in support of school spirit, wearing blue and holding up signs to cheer on Eastern in the Homecoming game the next day.

Many created cheers and made pyramids with their groups.

“It’s a good thing I’m not judging,” Ahmad said. “I would have given all of you the prize.”

It was not just sororities and fraternities who competed. Black Student Union and African Student Association danced and cheered as well.

To keep up with the theme of “100 Never Looked So Good,” the emcees also took the audience through a “musical journey” throughout the years.

They played songs like “Sweet Caroline,” “My Girl” and “Bye Bye Bye” by the band ‘N Sync.

During halftime, student government used raffle tickets to pick people to come up on stage and play a game where they had to throw a ball into a cup and empty a box of tissues the fastest.

Sebastiani has a cheering background, as well as other sports, which she said helped in her performance.

“Especially with tumbling and everything,” Sebastiani said

This is Alphi Phi’s second year as winners of the pep rally.

“I’m so proud of my team,” Sebastiani said. “I couldn’t have expected any more from us.”

Sebastiani said it was a great feeling.

“All the hard work and dedication to win this two-peat,” Sebastiani said. “It feels awesome and I’m hoping for next year we can do it again.”