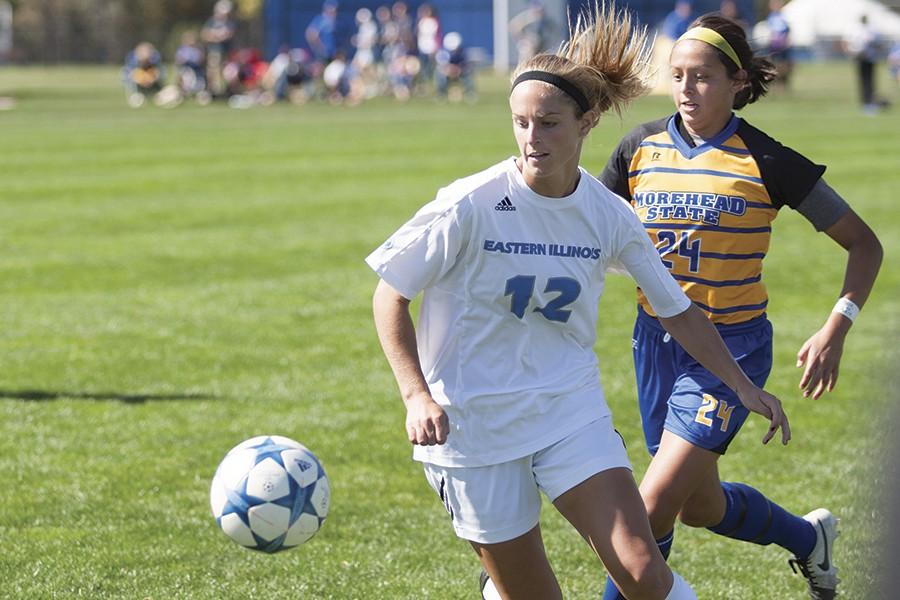 Senior midfielder Molly Hawkins has had seven goals and two assists in 16 games played so far during the season.

The Eastern women’s soccer team will hit the road two times this weekend before returning home to wrap up their 2015 regular season schedule.

The Panthers will travel to Austin Peay on Friday and will be taking on Murray State on Sunday.

Coach Jason Cherry said his team is motivated to pick up wins in their two remaining road games.

“We are motivated to finish strong,” Cherry said. “We’d like to win all of our remaining games and go game-by-game with what’s ahead of us.”

Eastern is fresh off a 1-2-1 four-game home stand. Eastern scored one goal in each of the four OVC home games.

Cherry said the offensive struggles were something he and his team have spent time addressing all week.

“We’re trying to focus on having possessions with a purpose,” Cherry said. “We’re looking at ways to transition from the middle third to attacking third quicker and a little more direct. We’d also like to have emphasis on attacking the corners on the weak side.”

Production on the offensive side may need a boost from players like senior midfielder Molly Hawkins, whose early-season numbers had her ranked among the nation’s best before the start of conference play.

Hawkins has accumulated five goals, which leads the team, but has not recorded a goal since Eastern’s 3-2 loss to Bowling Green back on Sept. 11.

“I was happy with the way that I started my senior year,” Hawkins said. “I’m in a bit of a rut right now, but I’m hoping I’m able to break out this weekend.”

Even though Hawkins has been struggling to find the back of the net, Cherry said he could see her getting back to that early-season form.

“I believe Molly will give everything she has for the team,” Cherry said. “I could see her having a fantastic weekend.”

Eastern has been stable defensively as of late with the exception of the occasional breakout performance by an opposing offense.

This is a result of the consistent play of freshman goalkeeper Maddie Lyon. She currently leads the OVC in saves with 7.64 and has recorded a 78 percent save rate.

Lyon has had three clean regulations out of the last four games.

Cherry said the key to his team being competitive and ultimately winning will be getting off to a strong start.

“We’ll try to stay focused and bring energy to the game early,” Cherry said. “Come out and play a tough five minutes at the start and set the tone.”

Cherry said he also wants his team to stay composed and avoid early mistakes and panicking.

Hawkins said she and her team will set to perform this weekend under the direction of her coach.

“I don’t want to look back at my career and think ‘what if?’” Hawkins said. “I want to know that I did my best and gave it all I got.”

Cherry said their opponents offer up a number of potential challenges for his group.

“Both teams can score,” Cherry said. “We have to be organized defensively and our transition has to be quick.”