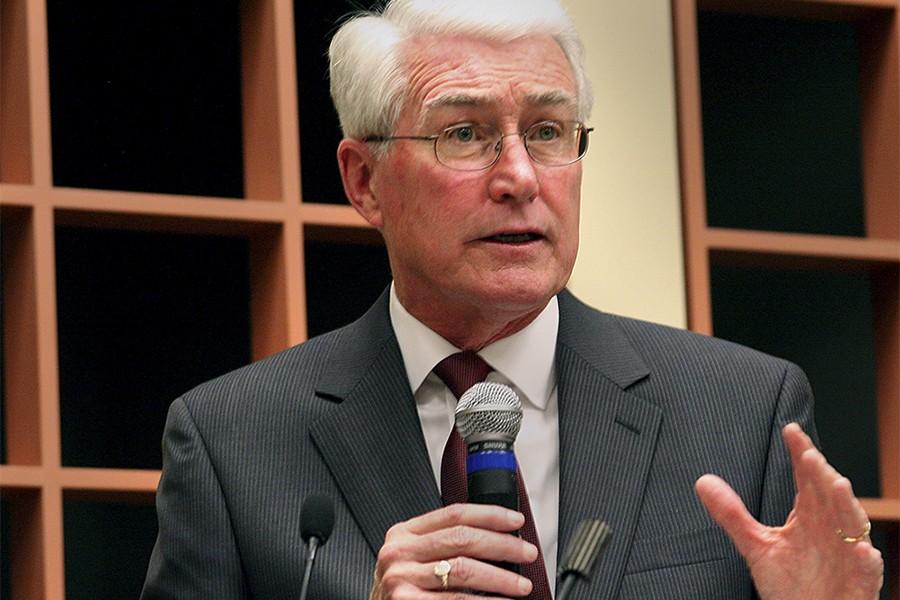 Not having a budget passed for Illinois is a pressing issue for many who live in the state.

Someone who has been vocal about his concerns is former Illinois Gov. Jim Edgar, who recently came to Eastern for the Edgar Speaker Series.

“There’s a lot of things that are not being funded, prime example is higher education,” Edgar said.

Edgar said some universities can deal with the lack of funding more than others, for example the University of Illinois, where he is a distinguished fellow of the Institute of Government & Public Affairs.

“They’ve got reserves,” Edgar said. “Smaller universities like Eastern are at a disadvantage; it puts very serious pressure and can do some serious damage.”

“It’s important for society, as you want people who have a well-rounded in depth education, specifically we need people with higher education for our economy,” Edgar said.

Edgar cited studies that showed higher education as being crucial to becoming a member of the middle class.

“People coming out of universities, those are the key folks in a lot of companies,” Edgar said. “If you don’t have those kinds of people, those companies aren’t gonna do well.”

For the state, it is important because having universities produces people who are going to be in the workforce, who also can do research and help businesses.

“You talk to the major corporations, and that’s one of the things they look for, a partnership with the universities,” Edgar said. “Most importantly, they look for good workers.”

Edgar said those from the top ranks usually come from higher education.

“One of the things that’s giving America an advantage over other countries is we’ve had a good higher education system that millions of people have access to, not just the rich,” he said. “We want to be very careful we don’t lose that as we go ahead.”

He said even if these universities do get a budget in two months, they might have students who have left or programs that have been disbanded.

Higher education is not the only institution that currently has no funding.

Because of the programs not receiving funds, a lot of people who need help are not getting it.

Edgar campaigned for Gov. Bruce Rauner in the general election, and has told him how important having a budget is, according to the State Journal-Register.

“I’ve given him advice, he can take that or not, and some things he has not agreed with because we still don’t have the budget,” Edgar said.

Edgar said he is disappointed that Illinois still does not have a budget and it is a tough situation.

“It is not all (Rauner’s) fault, but the governor is the person in charge and the governor has got to be the one who sets aside maybe some of the things they’d like to do to get done what has to be done,” Edgar said. “Right now, we need a budget. Hopefully both sides will kind of come together.”

Edgar said he has no regrets with picking Rauner to support in the election.

“In election time, you go on the information you have, you have two candidates and you pick who you think is the best of two,” Edgar said.

To pass a budget, Edgar said everyone has to do things they might not want to do.

“Democrats don’t like to cut, Republicans don’t like to raise taxes, but they’re gonna have to do both,” Edgar said. “People have to realize there are things they want, but might not be able to get this year.”

“You cannot have a state function without a budget, and four months is way too long,” Edgar said.