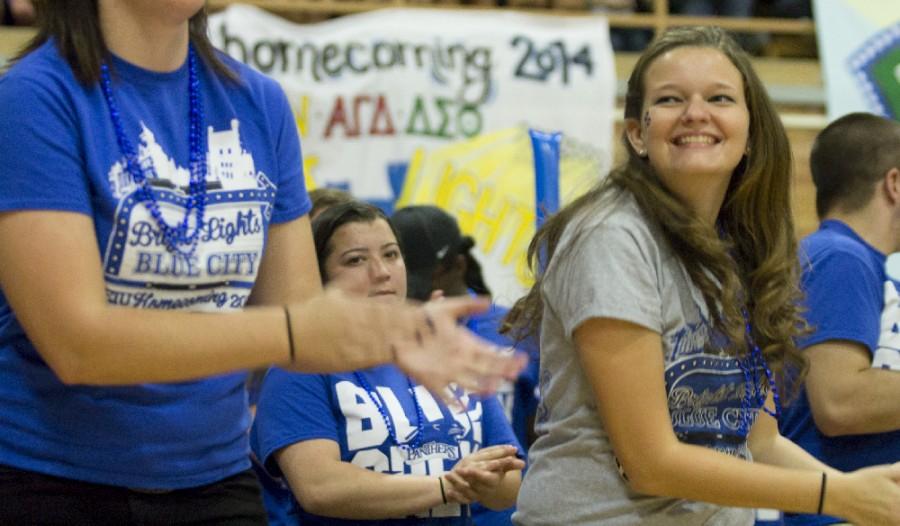 Amie Hansen, creator and president of the EIU Blue Crew, claps along with other students and staff during Yell Like Hell on Oct. 24, 2014 in the McAffee Gym.

Yell Like Hell is a traditional pep rally held every year in conjunction with Homecoming, and like the other events of the week, it will incorporate a decade subtheme, being the 1990s and early 2000s.

The event is designed to spread campus-wide school spirit as students and Charleston residents prepare for Eastern’s homecoming game against Tennessee Tech. The rally will feature all sorts of dance routines, contests, and plenty of student participation.

Tavia Fuqua, the co-coordinator of the homecoming committee, said she wants to have more student participation for this year’s pep rally.

“Yell Like Hell is a big party, it’s a huge, big ordeal,” Fuqua said, “All the student body gets together and I like it. It’s a competition but it creates unity, and it’s something different.”

Fuqua said the rally is not only a celebration for the students, but for the university and the members of the Charleston community.

“It’s a big celebration for our university, for our school to show our (school) spirit even within our own organizations,” Fuqua said.

Nathan Wehr, the interim assistant director of student life, said he agrees with Fuqua about Yell like Hell.

“It’s a big celebration for students to come together and rally before the big homecoming game the next morning,” Wehr said.

Tavia said for this year’s rally, things are going a bit different this year.

“We’re going to try to have more student participation,” Fuqua said. “Normally it’s just the judges that are watching the show, this year we kind of want to get students involved.”

Wehr said this year, there will be at least 16 groups performing their routines during the pep rally.

“Each year, they put on different cheer and dance routines,” Wehr said. “We have almost 16 plus groups that will be performing their own kind of cheer-dance routine to 90s earlier 2000s songs.”

Wehr said the Pink Panthers the Eastern Marching band will also be performing during the pep rally.

“Having the students involved, I think, is a big key factor compared to the years before because students, the audience at least, is not really involved, it’s mostly been the judges who decided,” Fuqua said. “I just like that fact that we can have (the students) have an option in ‘judging’ compared to years before.”

Fuqua said she thinks students definitely like the theme for the event, which has helped out compare to previous years.