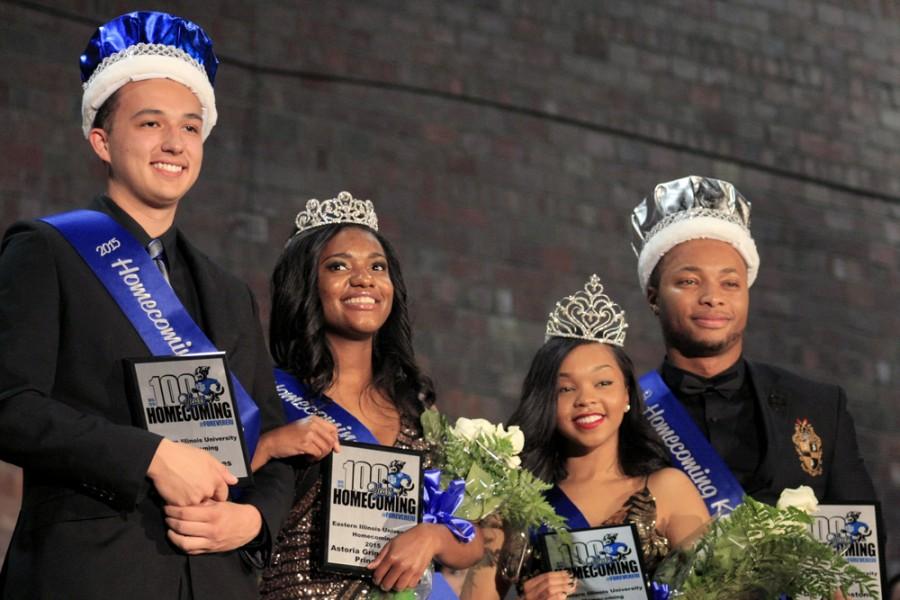 Members of Eastern’s different registered student organizations cheered and applauded for their favorite nominees as they made their way across the stage in McAfee Gymnasium during Eastern’s Homecoming Coronation.

This year’s Homecoming royal court had a Roarin’ Twenties theme; before the event started, students were able to take a few photos in front of some of the different banners hung in the gym or in the photo area designed in 1920s esquire apparel.

Hosea, a senior communication studies major, represented the Delta Sigma Theta sorority and said she was surprised to hear her name called for Homecoming queen.

“I feel like this is just phenomenal,” Hosea said. “I’m so ecstatic about being crowned Homecoming queen. I didn’t even see it coming.”

Hosea said the whole process has been about achieving goals and reaching them.

“You always think that you can’t do it, but that was the whole point of this whole thing was just setting new goals and being able to achieve what ever you want to put your mind to,” Hosea said.

Hosea said her emotions were all over the place as she was waiting on stage to hear who would be crowned Homecoming queen.

“I was really nervous and I was sweating the whole time,” Hosea said, “I feel like it was a really good experience.”

Hosea said the campaign for Homecoming helped her open up and meet more people on campus.

“I’m really looking forward to getting our new students and our students who commute here more involved,” Hosea said. “So getting them excited about Homecoming as well as everyone else who is already here.”

Ghostone, a junior kinesiology and sports studies major and member of Alpha Phi Alpha fraternity, was named as this year’s Homecoming king.

“I just feel blessed and thankful,” Ghostone said. “When I have doubted myself, people have believed in me all my four years here at Eastern and I’m just blessed to be a part of this here at Eastern Illinois.”

Ghostone said one thing he is looking forward to being able to represent Eastern everywhere he goes as the Homecoming king.

“I talk a lot so I try to go to a lot of events across campus whether that’s social or service events,” Ghostone said. “Just meeting new people and representing who I am as a part of Eastern to everyone on campus.”

Hughes, a sophomore a business major, said it was exciting to be Homecoming prince because of what he has been through lately.

“I’ve been trying to find who I am,” Hughes said. “It’s exciting to see the support I have from all of my friends, especially my fraternity Sigma Alpha Epsilon.”

Hughes said he came out four months ago, and he got a lot of support from his brothers at Sigma Alpha Epsilon, as well as his friends and family.

Griggs-Burns, a sophomore health administration major, said it was exciting and nerve-wracking being named Homecoming princess.

“I have so much adrenaline going through me,” Griggs-Burns said. “I thought if I won it would be a good platform to display my Eastern spirit and be that representation for the community.”

Higelmire is the department chair of recreation administration and Landrus is a professor of foreign languages.

Daniel Hernandez and Kami Dally were announced as the runner ups for prince and princess.