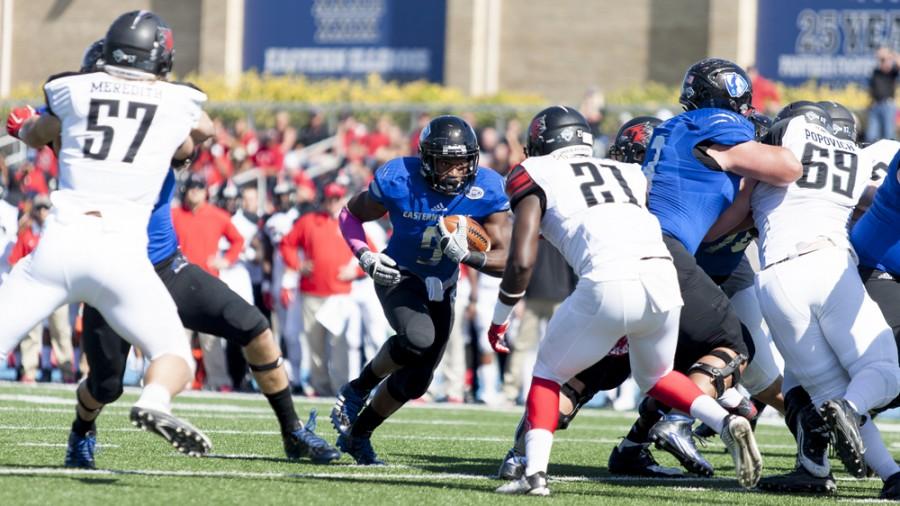 Red-shirt junior running back Devin Church makes his way into the endzone during the Panthers' 33-28 Family Weekend win on Oct. 10 at O'Brien Field. Church ran for 75 yards completing one touchdown during the game.

Devin Church just keeps adding one good performance after the other this season. The red-shirt junior running back caught the Ohio Valley Conference’s attention on Saturday, rushing for 125 yards and two touchdowns in a 23-20 overtime victory at Tennessee State.

He was named the OVC Newcomer of the Week on Sunday, a day after the Panthers moved to 3-0 in OVC play. Only Jacksonville State and Eastern Kentucky have the same conference record.

It was the third straight multi-touchdown game for Church, who had a season-high three touchdowns in a 40-16 victory at Austin Peay earlier this month. He leads the entire league with eight touchdowns, including six on the ground. He also ranks third in the OVC rushing rankings, averaging 80.3 yards per game.

These accolades and stats haven’t distracted him from his ultimate goal of playing in the postseason.

“I want to play in that national championship game and win the OVC,” Church said. “I know we can and that’s what I’m really focused on.”

If that is what he’s focused on, both he and the Panthers will have to get through their next five games, which begins with a home game Saturday against Tennessee Tech, which will be the 98th homecoming game in school history.

Jacksonville State junior quarterback Eli Jenkins was named the conference Offensive Player of the
Week, after leading the Gamecocks to their 12th straight OVC victory at Tennessee Tech. A total of 270 yards, 184 of which were passing, moves him into fourth place on the school’s all-time list.

The Gamecocks had 619 yards of total offense for the game, which gives them 17 consecutive games with at least 400 yards.

Jenkins scored three touchdowns all in the first half, on a four-yard pass, a 40-yard run and a 30-yard pass. He has never been beaten in an FCS regular season game.

And finally, the other undefeated team in the OVC, Eastern Kentucky had two players named player of the week. Junior defensive tackle Noah Spence had seven tackles, including 3.5 for loss in a 27-10 victory over Southeast Missouri.

The Ohio State transfer also had 1.5 sacks, and it was sixth straight week with at least one. The OVC Defensive Player of the Week leads the nation in tackles for loss per game with two.

Australian punter Keith Wrzuszczak averaged 45.5 yards on four punts against the Redhawks. The sophomore also completed a pass on a fake attempt. He gained 16 yards on the pass, and gave the Colonels a first down.

His 43.5 yards per punt this year rank 10th nationally.

Jenkins and senior running back Troymaine Pope were named to the midseason watch list for the 2015 CFPA FCS National Performer of the Year Trophy. But they’re not the only OVC players that garnered notoriety for this award.

Eastern Kentucky quarterback Bennie Coney and Tennessee-Martin quarterback Jarod Neal were also named as candidates in the field of 32.

Coney has completed 63.8 percent of his passes, and gained 1,302 yards and scored 12 touchdowns through the air.

Neal has a completion percentage of 62.1 and totaled 1,473 yards and 17 touchdowns. Not even Jenkins, who was named to the preseason watch list, has as many passing yards as Neal.

However, Jenkins completion percentage of 63.8 is greater than Neal’s. Jenkins has thrown for 1,117 yards and 10 touchdowns, and rushed for 318 yards and four touchdowns.

His running back, Pope, leads Jacksonville State with 699 yards and five touchdowns on 80 carries.