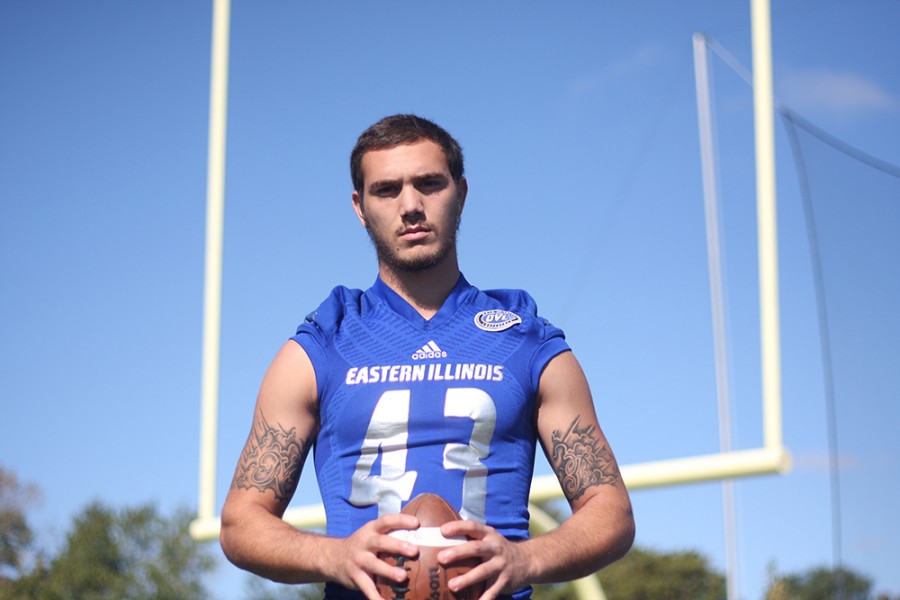 Sophomore kicker Nick Bruno is 4-7 on field goals this year. Bruno made two field goals on Saturday to contribute to the Panthers’ 33-28 win against Southeast Missouri.

Before starting his football career, sophomore kicker Nick Bruno did what many kickers do, play soccer.

Although soccer was his first sport, Bruno liked being on the football field more.

‘’I played soccer, and then a teacher I had, who also coached football asked if I had ever kicked a football, and I told him no, but that I would like to try.’’ Bruno said. ‘’It was different. The atmosphere is completely different. Football just felt more right to me.’’

Bruno took his kicking experience from Daytona Beach, Fla. to Charleston and despite the climate change was successful his first year, earning Freshman All-American Honors.

In his first season, Bruno was 14-of-16 in field goal attempts, his longest field goal being 45 yards. For his skills he was also named to the All-OVC Newcomer Team.

Bruno knows what it takes to perfect his skills in the off-season.

‘’The off-season for me is just getting stronger and working on my technique. I don’t kick as much but I’ll work on my steps.’’ Bruno said. ‘’I’ll work on the little things, like the inches and centimeters that make a difference.’’

Bruno’s brings a strong leg to the team according to Eastern coach Kim Dameron, and Bruno said he knows the importance of being accurate.

‘’When we can’t score a touchdown, we have to kick a field goal, the strengths I bring are in my kicking.’’ Bruno said. ‘’My goals are just to put them through and make my kicks perfect. You’re going to miss here and there but hopefully I can continue to put them through.’’

So far in his sophomore season Bruno is 4-7 in field goal attempts, his longest was hit from 39 yards.

‘’When you miss you have to take the time to figure out what you did wrong, or maybe you know right away, which most of the time I know exactly what I did wrong when it happens. Just focusing on that, and correcting the next one and relying on your technique.’’ Bruno said. ‘’It’s all a mind game really. You have to envision yourself doing it before you do it. When you step out there you have to envision the best situation possible.’’

The worst situation possible Bruno could’ve imagined occurred last spring when Bruno faced surgery on his hip. The road to recovery was hard but Bruno is on the comeback.

‘’I just came off hip surgery so hopefully I can get back to how I was before. I’m struggling a little bit but hopefully I’ll get more consistent and keep putting them through.’’ Bruno said. ‘’The recovery was hard and rehab was very difficult for me. It was a long process, and it was painful. Once I got it all right it just clicked again.’’

After the hip surgery, Dameron said he is happy with what Bruno has done.

“He had surgery in the offseason on his hip,” Dameron said. “It’s been a bit of a process, getting him back into a groove. But I was really happy he hit 2-for-2 last week (against Southeast Missouri), which was huge for us. We won by five and he scored on nine of the points that we scored.”

Bruno said he and the rest of the Panthers are excited to play Jacksonville State after their current 2-0 starts in the Ohio Valley Conference. He said Jacksonville is the team to beat right now, as the Panthers hope to win the conference.

Bruno said he can handle the pressure of how important his role is on the field in just the very short time he is out there.

‘’I really like being able to score a lot of points all the time. If there score I know I can put a point up. It’s just fun to me as in just trying to see how accurate you can be and how consistent you can be. I like putting myself in pressure situations, I get a joy out of that.’’ Bruno said.

Bruno and the rest of the Panthers will travel to Nashville, TN this Saturday to play the Tennessee State Tigers at 6 p.m.