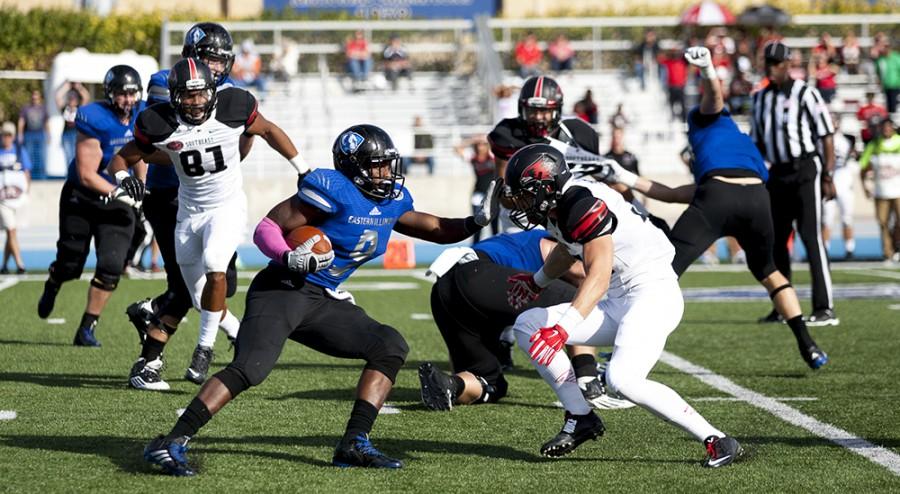 Red-shirt junior running back Devin Church blocks Southeast Missouri State's Josh Freeman on a run up the field during the Panthers' 33-28 Family Weekend win on Saturday at O'Brien Field. Church ran for 75 yards completing one touchdown during the game.

The euphoria surrounding the Eastern football team’s 33-28 victory over Southeast Missouri on Saturday, was not just because the Panthers won a home football game for the first time this season.

Players and coaches alike were thrilled that the win gave the Panthers their second straight victory of the season, and a 2-0 start in Ohio Valley Conference play. The Panthers are one of three teams in the OVC with a perfect 2-0 record.

Eastern Kentucky and Jacksonville State, two of the favorites to win the OVC title, have also started off with 2-0 starts.

“In this conference, you can get beat or you can win every Saturday,” coach Kim Dameron said. “It’s a very competitive conference from top to bottom.”

All but four teams in the OVC have .500 records or better, including Tennessee-Martin, who is 2-1, and Southeast Missouri, who is 1-1 following Saturday’s game. Both Jacksonville State and Eastern Kentucky are the only ranked teams representing the OVC.

Jacksonville State and Eastern Kentucky will visit Charleston next month, but Dameron said that Eastern needs to get through the next three games, in order to meet them for a chance to claim the OVC crown.

“When we get into the OVC conference race, it’s one at a time,” Dameron said. “Hopefully we can put ourselves into position to where we have some of the top teams in the conference coming into our place late in the season.”

One of the things that the Panthers are preparing for in the coming weeks is eliminating mistakes and penalties. Eastern was penalized 13 times for 96 yards on Saturday, which included a few unsportsmanlike conduct calls. Senior linebacker Kamu Grugier-Hill said that discipline will be important in the future.

“It all just comes down to discipline,” Grugier-Hill said. “We’re a young team, have a chip on our shoulder, but we need to have more control.”

While the 15-yard personal foul calls hurt Eastern the most, flags and other penalties, such as delay of game and offsides will need to be corrected Dameron said. But the best time to correct them is after a win he added.

“We keep harking at it, but we’ve got to look at who’s doing it, and get them corrected,” Dameron said. “But it’s really wonderful to be doing it after a win, especially one in which you led the entire football game.”

Bounds also scored on a 65-yard catch and run in the third quarter, and finished the day with five catches for 107 yards to lead Eastern. Bounds entered the game with three catches, all of which came the week before at Austin Peay.

Bounds said he has gotten used to his role at tight end, after converting from receiver in the offseason, and will continue to develop in any way, in which the team needs him to.

Their record of 2-3, is not what the Panthers hoped for, but it does not matter as much as the past two games and the ones remaining this season.

“It kind of sucks to have an overall record like we do, but at the end of the day it really doesn’t matter,” Grugier-Hill said. “Conference is all that matters moving into game-by-game and playoffs.”

Eastern will travel to Nashville on Saturday, for a 6 p.m. battle with Tennessee State.