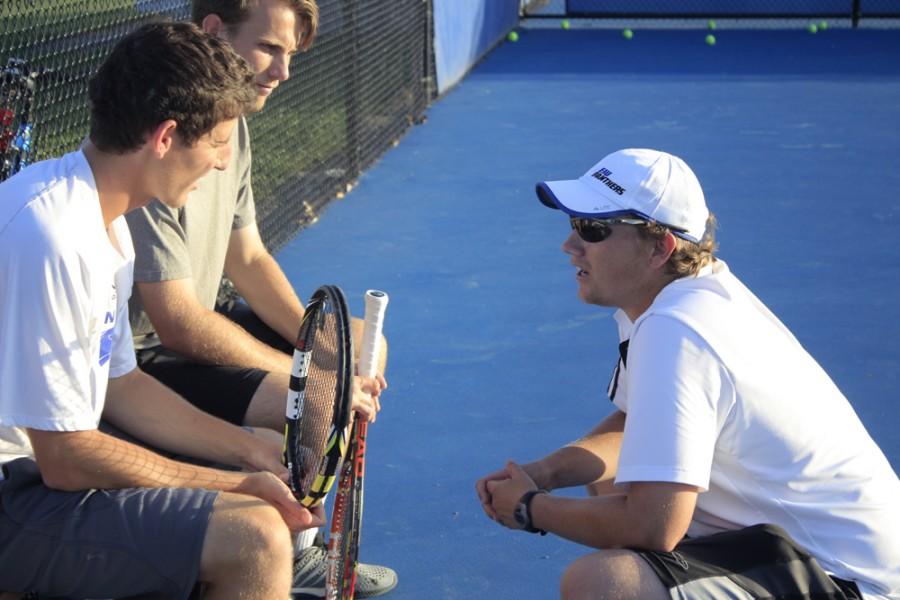 Sam Kercheval came to Eastern to coach the men’s tennis team, but he is also pursuing his master’s degree in sports administration at Eastern.

Kercheval said Eastern was a great fit for him to get going in the college coaching ranks.

“There is also a great benefit from the location, as I have spent my entire life in Bloomington, Ind.,” he said. “My fiancé and family are still all there, so I can see them regularly. Being close to home also has its recruiting benefits as I am in the Midwest, an area I know really well as a player and now a coach, which is helpful.”

Kercheval comes from a high quality tennis background, as he is just one year removed from being a volunteer coach with the Indiana University men’s tennis squad. Kercheval was hired by Eastern athletic director Tom Michael in August, and Michael said Kercheval is the right man for the job.

“Sam’s desire to develop players and his passion for tennis was very evident,” Michael said. “Sam has taught a variety of levels and coached both at the high school and collegiate level.”

He spent four years as the Bloomington High School girls’ tennis coach in his hometown of Bloomington, Ind.

He said the jump from high school to Division I men’s tennis can be as expected, but he added there are differences.

“I did coach some great players, one of whom was the best in the state of Indiana and a couple who have gone on to be DI athletes,” he said. “More importantly, the fundamentals of the game are the same regardless of level and so that make it more similar than different for me. You have to teach the strokes, singles strategy, doubles strategy as well as build a team culture and chemistry at both levels.”

Kercheval’s tennis background goes further back than just high school. He is heavily involved with the United States Professional Tennis Association and has been for the past six years. He leads the initiative in the Midwest to recruit more teaching professionals under the age of 30.

He is a USPTA Certified Elite Professional, which is one of the highest certifications a tennis teaching professional can earn.

Kercheval said he has learned so many things each and every season coaching in high school from how to develop individuals, how to develop a team and team culture, setting lineups, organization trips, budgeting and how to interact with many different people from players to parents to administrators to opponents.

“I was fortunate to have coach some very good teams and players and with that were numerous new experiences I have learned from and will use going forward,” he said.

The USPTA is an organization and with Kercheval being certified professionally has its benefits for all levels, according to him.

Kercheval said he has really worked hard to develop as an instructor and coach since he began teaching eight years ago.

“The USPTA provides an incredible amount of education opportunities and resources to professionals,” he said. “I have been very involved in attending conferences, reading new teaching, writing articles and presenting material colleagues. It’s because of these resources that I have a good foundation in fundamentals of teaching, something I use daily when coaching.”

Those fundaments are already being implemented at Eastern as the team has started its fall season.

Senior Rui Silva, who has seen his third head coach in four years at Eastern, said his team has learned a lot from Kercheval in his short time.

“Coming from an experience in a great team like the one Indiana University has, he teaches us valuable things every day, and most importantly tries to instill in our team the routines and mindset of a Big 10 team, which can really make a difference in our program,” Silva said. “He makes sure that we understand tennis better and how much it takes to be a great team.”

In his short time at Eastern, Kercheval has realized what a great group of guys he has on the team.

He has a team that is quite experienced. There are four seniors on the squad, along with three sophomores and one freshman.

“All of my players are enjoyable to be around and are such a close knit team,” he said. “It makes practice fun, but more importantly, it makes it easier to work hard especially when things get tough.”

Kercheval said that he stresses daily focus, effort and discipline to reach their goal, which is to constantly improve.

“It is much easier to accomplish these things when you have seven other guys pushing you and going through it by your side,” he said. “To inherit a team that has great chemistry has been such a positive as we all go through this transition together.”

Sophomore Jared Woodson was happy to hear that he has a new coach at the helm.

“I couldn’t ask for a better men’s head coach here at (Eastern),” he said. “Coach will lead the program in the right direction, because he has experience and is realistic. If we are having issues, he will let us know and help us fix it in the most positive way. I have already been playing my best tennis in the short time he’s been here. I can only imagine what he can do for the program.”

Michael hopes that Kercheval will move the tennis program in the right direction, as they have not made the conference tournament since the 2013-2014 season.

Michael said he is confident that Kercheval will be able to develop the current student-athletes and make them better in order to compete in the Ohio Valley Conference.

“Sam has done a great job in a short amount of time,” Michael said. “He has worked hard to get to know the current student-athletes’ strengths and weaknesses and what areas are most important for improvements. The student-athletes have embraced him and are eager to learn and improve on the tennis court.”

Kercheval has already done a lot for the Eastern men’s tennis program, now it is time to see if it all works out.