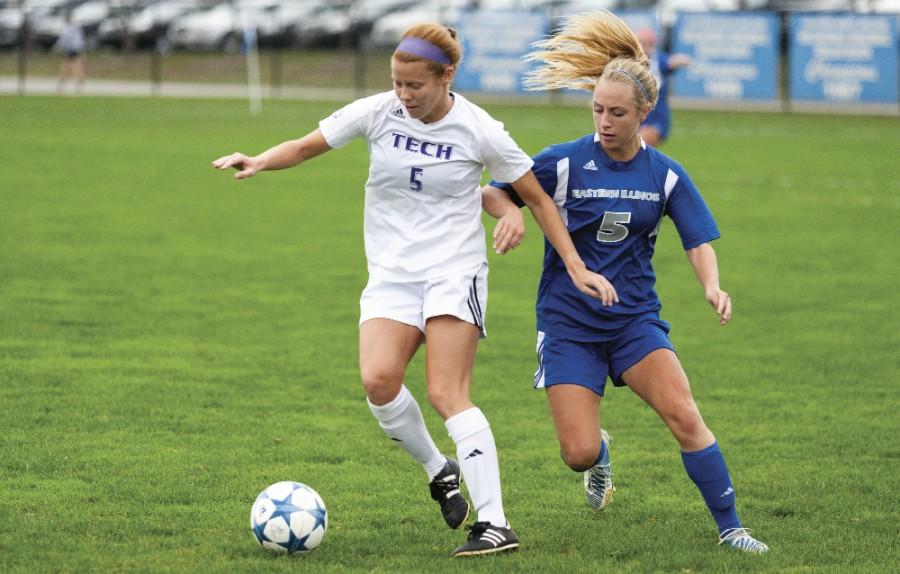 With players and students in attendance, the Eastern women’s soccer team split their Family Weekend games.

Eastern split the weekend following a 1-0 win over Tennessee Tech on Friday and a 1-0 loss to Morehead State on Sunday.

Eastern put together a complete performance against a Tennessee Tech team that was undefeated in conference competition and had a goalkeeper that was on a saving streak.

After Friday’s win, coach Jason Cherry was happy with his team and was even more satisfied by the fact that it was against a team that was dominating their opponents entering the matchup.

“I’m very proud of this team,” Cherry said. “They were all there for each other throughout. They should be proud of themselves too.”

Midfielder Ali Carlson picked up her first goal of the season in the 30th minute off a deflection to a Tennessee Tech defender.

It was the only time that Eastern was able to get the ball past the Tennessee Tech goalkeeper, but it was enough.

Lyon made seven saves in the game in what was her second-straight shutout. Previous to the last two games, Lyon had only recorded one shutout through 12 games.

Overall, Cherry thought the effort of the team as a whole is what propelled them to victory.

“We came in with a game plan and executed it very well,” Cherry said, “They went out there and earned a big win.”

Also, the Eastern women’s basketball team stormed the field to join the winning team at midfield following the game’s conclusion.

On Sunday, against Morehead State, things weren’t nearly as positive for Eastern, but it did appear to have some promise.

Eastern once again held their opponents to a scoreless 102 minutes thanks to solid work by Lyon.

In the 103rd minute, Eastern was called for a foul within the goal box to set Morehead State up with a penalty kick.

“I didn’t like that call at all,” Cherry said. “I think we made a good play on the ball, but the refs gave them the call.”

The ensuing penalty kick flew passed the stretched arms of Lyon to give Morehead State the win.

Cherry said his team worked hard to give themselves a chance to win, or at least draw, but had one taken from them.

“I feel like we had one stolen from us,” Cherry said. “I’d like to say our opponents earned a win today, but I just can’t.”

Eastern was outshot 18-7 in the game and failed to earn a corner kick attempt.

Forward Hannah Miller was kept scoreless throughout the weekend despite having a number of big chances.

As a team, Eastern earned a number of opportunities to score, but came up just short.

“We’re creating, but finishing is what we need to work on,” Cherry said.

Eastern will be back in action on Friday, when they host Eastern Kentucky.