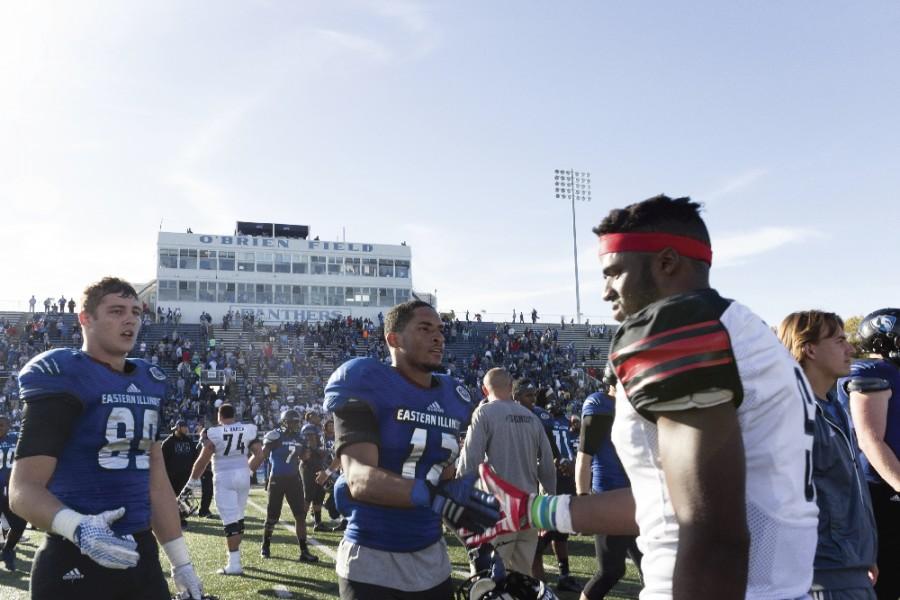 There’s no question that every sporting event is defined by a critical moment in the game. But there are certain games where more than one play can decide the outcome. The Eastern football team’s 33-28 victory over Southeast Missouri on Saturday, was one of those games.

Red-shirt sophomore tight end Addison Bounds earned his fair share of big plays. He caught five passes for 107 yards and two touchdowns, including a 65-yard catch and run to the end zone.

“We knew it was going to be a hard-fought game. A war to the end,” Bounds said. “Getting the ‘W’ at the end, it felt like a solid win.”

Bounds had only caught three passes heading into Saturday’s matchup, but finished the day as the Panthers’ leading receiver. He came to Eastern as a wide receiver but the coaching staff asked him to move to tight end. He showed some of his wide receiver speed on his 65-yard touchdown.

“The safety just kind of bit on the run fake, the rollout the other way,” Bounds said. “The ball felt like it was in the air for so long. I didn’t realize I was that open until I caught it.”

Another play that aided the victory was a 54-yard punt by freshman Mike Bernier. The Panthers offense had converted on third down twice on their last possession, but were forced to punt with 34 seconds left in the game, and only up by five.

Bernier booted the ball to the SEMO five-yard line, giving them a lot of field to cover on its final drive.

“We had to have that to get the ball off, so that we could burn the clock and flip the field position-wise, Eastern coach Kim Dameron said. “He did all three with that punt. Just a great clutch performance by a true freshman.”

SEMO drove the ball to midfield, and were forced to throw a Hail Mary pass for the final play. SEMO quarterback Dante Vandeven threw the ball toward the back of the end zone, where three Panthers were waiting for it. The pass was batted down, and the Panthers had won their second consecutive game, to move to 2-0 in Ohio Valley Conference play.

Eastern is 2-3 overall this season, but senior linebacker Kamu Grugier-Hill said that the overall record does not matter.

“You always keep an eye on your overall record. But at the same time it doesn’t really matter, Grugier-Hill said. “Conference is all that matters, moving into game-by-game and playoffs.”

Grugier-Hill had eight tackles for the Panthers, included four for loss. Red-shirt senior Jourdan Wickliffe led the Panthers with 11 tackles and one pass breakup.

The Panthers defense allowed 76 yards of total offense in the first half and seven points, to go into halftime with 13-7 lead. The only Redhawk score was an interception returned for a touchdown by linebacker Josh Kinzer.

Kinzer picked off senior quarterback Jalen Whitlow, who threw behind his wide receiver.

Whitlow and the Panthers offense responded quickly in the second half with an opening drive of seven plays for 69 yards, which ended with an 11-yard touchdown reception by Bounds. Bounds scored on the next drive, as well, on his 65-yard touchdown catch.

The crowd of 7,911 realized how open he was. As the ball was about to drop into his hands, a great hush grew over the crowd. They exploded when Bounds raced to the end zone, to give Eastern a 27-7 lead. Dameron said that the Panthers have to hold serve at home the rest of the season.

“We’ve got to keep pounding and learning from our mistakes,” Dameron said. “But it’s really wonderful to be doing it after a win, especially one in which you led the entire football game.”

Grugier-Hill said that while the defense did good holding the Redhawks to 117 rushing yards they need to get back to being a violent defense, which is fast and furious.

“I want the offense to think they’re 13-14 of us out there,” Grugier-Hill said. “If we can hold somebody to 117 yards rushing every day, we’re going to have the chance to win.”

Eastern will once again hit the road for an OVC matchup at Tennessee State next Saturday at 6 p.m.