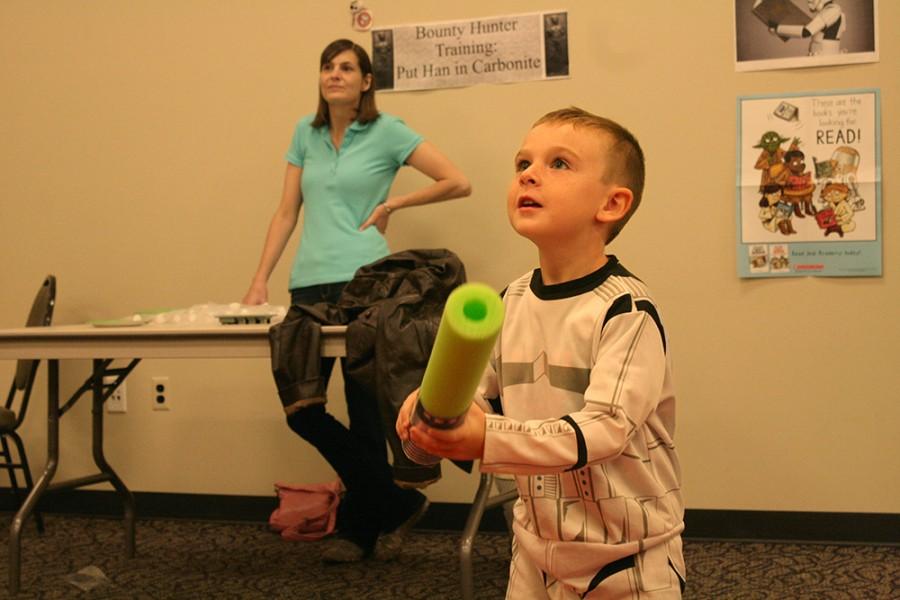 Owen Keefe, a 5-year-old Charleston resident, gets ready to hit a red balloon with his pool noodle light saber at the Star Wars Reads day event put on at the Charleston Carnegie Public Library Wednesday.

People of all ages dressed as Yoda, Storm Troopers, Wookies, Darth Vader and other various Star Wars characters gather in a crowded room at Charleston Carnegie Public Library on Wednesday.

The 4th annual Star Wars Day was held in rotary rooms A and B of the library.

Children were running and jumping through an obstacle course, hitting a balloons with toy light sabers, throwing toy snowballs at a picture of the Viper Probe Droid, and participating in numerous activities offered at this event.

The Jedi Training obstacle course was a red rectangular plastic tablecloth taped to the ground with glow necklace rings spaced out on it.

The objective of this activity was to jump from ring to ring without falling into the “lava”, the area outside of these rings.

Another available activity people could do was building Luke Skywalker’s prosthetic hand.

Materials to make the hand included black construction paper in the shape of a hand, bendy straws, tape and yarn.

Participants of this activity threaded yarn through an end of bendy straws, taped the top part of the yarn to the back of the black hand-shaped construction paper, and taped each yarned ridden straw to three middle fingers of the paper hand.

All of the straws had holes pre cut into them so the fingers on the hand could move and grasp things more easily.

To make the fingers on the hand bend participants would grab the ends of the yarn and pull down.

Another activity involved throwing toy snowballs at a picture of the Viper Probe Droid.

Participants had to “blast this Droid from Hoth before it transmitted the location of the Rebel Base,” according to the information flyer at the station.

Brooks Shirley, an 11-year-old Star Wars enthusiast, was one of the many who attended this event.

“I have liked Star Wars for three or four years, so I was excited when my dad told me he was taking me,” Shirley said.

Shirley has seen all of the Star Wars movies and read several of the books.

Shirley said “Return of the Jedi” is his favorite because it depicts the final battle between Luke Skywalker and Darth Vader.

Lugar said the staff and volunteers have been collecting Star Wars items throughout the year to have for the event and for raffle prizes.

Lugar said if a someone is reluctant to read, sometimes having them read Star Wars could get them hooked.

The publishers of the books suggested doing these events because it helps get people excited about reading.

Lugar also said she was excited about planning the events because she is a fan of Star Wars.

“If I get to plan an event, it might as well be something I ‘m excited about,” Lugar said.

By the end of the event, 136 people had attended. Lugar said in the event’s 4 years of existence; this was the most people they have ever had.