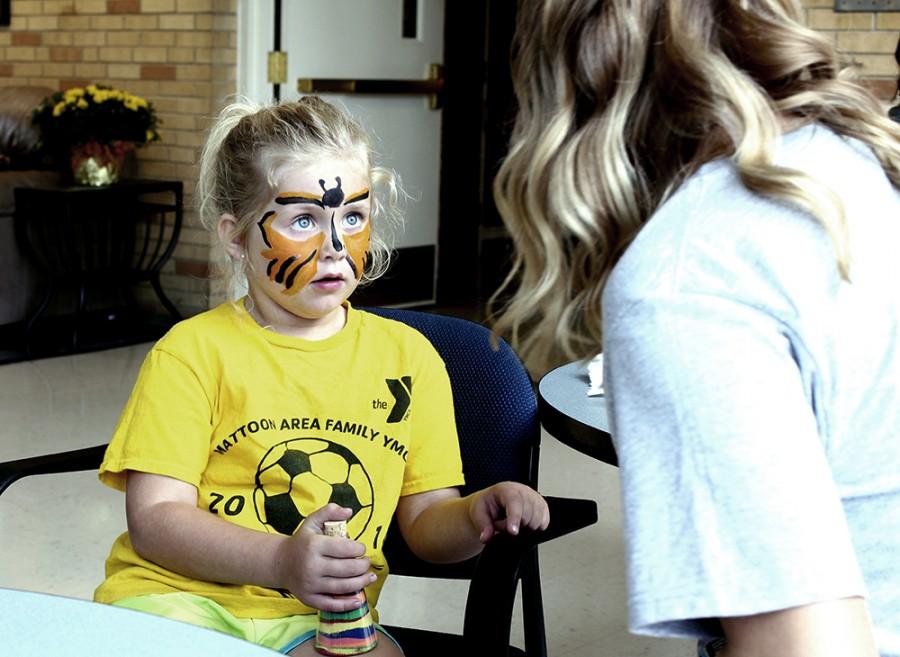 Kelsey Trigg, a Charleston resident, gets her face painted at the "Face Painting/Sand Art Bottle" event on Sept. 20, 2014 at the Bridge Lounge in Martin Luther King Jr. University Union.

The University Board has spent the past few days finding a replacement for the Family Weekend Concert, and announced a “Family Funfest” would be taking the place of what was supposed to be a performance from Three Dog Night.

The event is scheduled to take place from 7 to 10 p.m. on Oct.10 in the Martin Luther King Jr. University Union and it will all be free.

The event will wide variety of entertainment showcases including a balloon artist, a caricature artist, bowling, billiards and giveaways.

There will also be discounts in the EIU Bookstore, Food Court, Java B&B and the Panther Pantry.

Ceci Brinker, the director of student life, said the event will also have three major venues to attract students and their families.

Brinker said the University Board spent a lot of time trying to narrow down their list of possible options for the concert replacement.

“(The event) is actually kind of a family version of an Up All Nite event that will feature a lot of games, prizes, giveaways, entertainment, interactive game activities throughout various venues of the Union,” Brinker said. “We’re pretty much keeping it housed and focused on activities and events in this building and hopefully students will come out with their parents and their families on Saturday night and have a wide array of things that they can participate in free of charge.”

According to the event’s press release, Rubben is schedule to perform at 7 p.m. in 7th Street Underground and will kick off the whole event.

Rubben uses a variety of characters during his performances, including an old man, fortune teller, and even a mask able to turn a audience member into a character.

“Thinkfast” will start at 8 p.m. and will be in the University Ballroom. The show will incorporate trivia topics such as sports, music, TV, Movies, celebrities and even some academic topics. Participates will have a chance to win $500 in cash and prizes.

The final entertainment showcase, Erick Kand, will start at 9 p.m. and will be the Grand Ballroom in the Union.

Kand uses a blend of student involvement, improv, and hypnotism in his shows to create laughs and have the audience engage with the show.

Brinker said the dates for family weekend are given out three years in advance but the planning for the weekend itself begins about three to six months before the weekend.

“We usually have a couple of meetings in all the areas to talk about the planning,” Brinker said.

Other events going on during the weekend are a concert featuring Eastern Choirs, Wind Symphony, Orchestra, and other small ensembles, Adam Kario, a comedian juggler, Bingo, and the ninth annual “Run for a Reason: Run Red” 5K.

Brinker said she is excited for students to spend Family Weekend with their personal families as well as their Eastern families.

“The biggest thing we find rewarding is that our students can really be proud about having their families on campus,” Brinker said.

Mackenzie Freund contributed to this article.