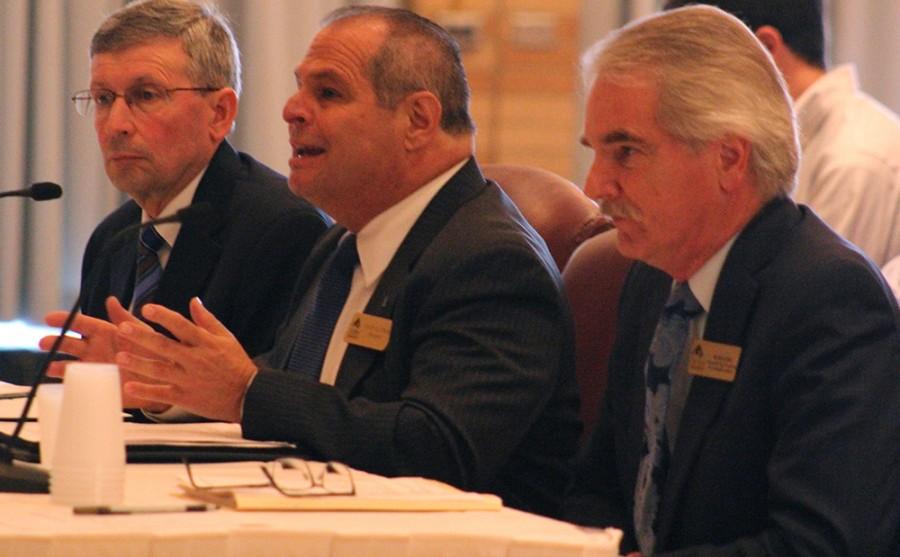 President David Glassman, (center) along with Blair Lord (right) and Paul McCann (left) speaks with the State Senate Higher Education Committee on Monday about the university budget in the Grand Ballroom of the Martin Luther King, Jr University Union.

“I don’t know a date or month,” Glassman said. “But I can say that we would be somewhere in the spring semester.”

Glassman said he feels it is almost “unthinkable” the state would allow for the budget issues to carry over into the spring.

“(Students) would be scared, just as I am scared,” Glassman said. “If we have no budget and no assurance from the state that we’re going to get a budget, it puts us in one of the most precarious positions that Eastern Illinois or any university in any state has been in.”

Because of recent court rulings, 90 percent of state spending has been committed, but the 10 percent involving state support for higher education remains unsettled, according to State Sen. Pat McGuire.

McGuire also serves as chair of the Higher Education Committee.

This final budget hearing, in a series of four held across the state allowed representatives from Eastern and Illinois State universities, Lake Land College and Danville Area Community College to voice their issues speaking directly with the senators running the committee.

Colleges and universities typically receive a combined $2 billion from the state budget, but are now being forced to subsidize state grants and programs in the likes of the Monetary Award Program in hopes the budget crisis is resolved before the end of the current semester.

Political science major Jose Durbin said his personal situation, including family medical bills, forces him to draw financial aid from as many as four different sources.

Durbin said many students, not unlike him, would find it troubling to attend public universities without the MAP grant; an award he says allows students the “dream” of going to college.

McGuire was nearly at a loss of words upon hearing Durbin’s explanation of his account trying to earn higher education.

“I want to commend you for your determination,” McGuire said. “For not being crushed, frankly, by what you have to do to assemble this package of financial resources. My hat’s off to you.”

More than 2,000 Eastern students receive the MAP grant and are being billed on good faith the money will be there at the end of the semester, Glassman said.

Paul McCann, the interim vice president for business affairs, said the university is prepared to carry the same action into the spring semester with the understanding legislature will do their job to pass the bill.

Glassman said Eastern needs the ability to make purchases, decisions and do things with the least bureaucratic amount of work that would be necessary.

Sen. Dale Righter, who represents the district containing Eastern, asked Glassman what he thought the state could do to help Eastern.

“We see different areas moving forward that we need to implement for our students,” Glassman said. “Allow us to do that quickly and efficiently in order for the betterment of our state and our students.”

Student Body President Shirmeen Ahmad said the students she talks to are really nervous not only about what is going to happen to Eastern, but what will happen to themselves.

“If the state can’t even back us up, then what’s our future going to look like?” Ahmad said. “We feel kind of abandoned right now. We are supposed to be the future, the future of Illinois.”

Glassman began his presidency early June when he focused his work against a declining enrollment issue, but his priorities changed after he reviewed the impending budget along with a $13 million deficit for Eastern.

Glassman said he made a nearly $12 million dent in the deficit already, but that came with cutting 159 university jobs since the summer.

Glassman described Eastern as an economic engine for the community, explaining the effect of the State allowing the university to shut down by delaying a decision on the budget.

McCann said roughly 17 to 18 percent of university funding is from the state appropriation, which is down from 26 percent a decade ago.

Glassman said each percent cut from the budget by the state is equal to $400,000, and would help toward the $1 million deficit left on Eastern’s bill.

Senator Kyle McCarter said the budget issue is translating into less opportunity for Illinois students, but there is not just one simple solution.

McCarter told Glassman a combination of things is needed to resolve the State’s budget issues.