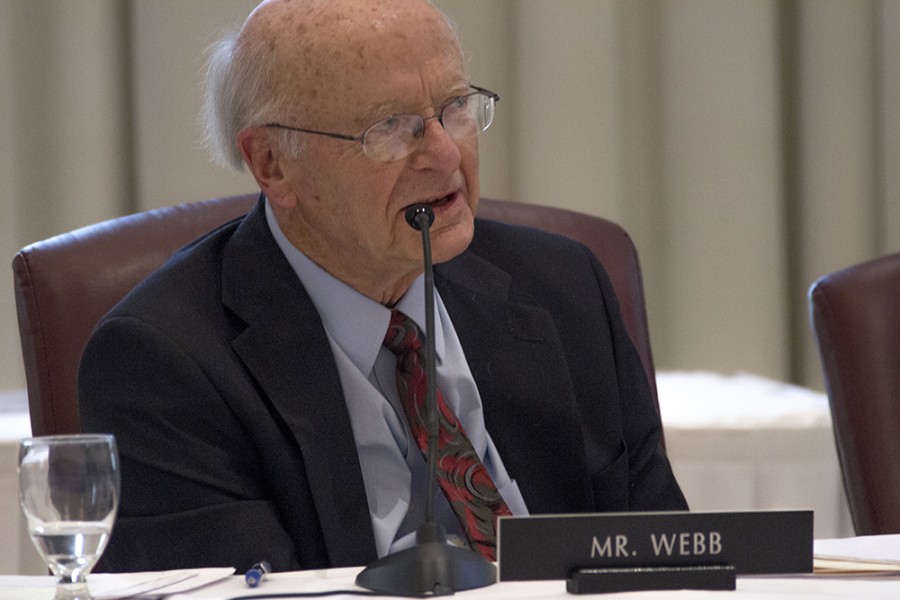 Robert Webb, the vice chair of Eastern’s Board of Trustees, died at 1:32 a.m. Monday, Oct. 5, 2015, at Sarah Bush Lincoln Health Center in Mattoon.

Arrangements are incomplete at Schilling Funeral Home in Mattoon.

Webb served as the chair of the board twice and has been a member since Aug. 2004; he was also president of Lake Land College from 1972 to 1984.

Webb had previously been a teacher and principal at Harvel Elementary School.

Rene Hutchinson, the chair of the board, said Webb used his insight into higher education to carry out his passion of making both Eastern and Lake Land better places for students.

Hutchinson said Webb called him last Thursday to say he regrettably might not be able to carry through with his duties on the board.

“He sounded quite ill, but to take the time to say it was a pleasure to serve on the board, that shows what a true man he was,” Hutchinson said.

Joseph Dively, a board member, said Webb was a great colleague and leader and he will miss the friendship they developed while serving on the board together.

“He was a very effective leader,” Dively said. “He chaired the committee that found (President) Bill Perry, which is something I think he would be most proud of.”

Dively said Webb was supportive of the efforts of both Eastern and Lake Land.

“He took initiative (for the boards) to work more closely together for the benefits of students,” Dively said.

Webb was known for asking great questions, which became an asset last year during the search for Eastern’s next president, Dively said.

Hutchinson also said he was “taken aback” while listening to Webb ask questions of the presidential candidates to see if they really had what it took to fill the position.

Because board members are appointed by the state governor, Hutchinson said he is not sure when a replacement would be selected, especially considering the current stalemate in Springfield.

“He will truly be missed in upcoming meetings,” Hutchinson said. “He was a giant of a man in serving both Eastern and Lake Land.”