Nothing “Little” about Panther’s 40-16 victory 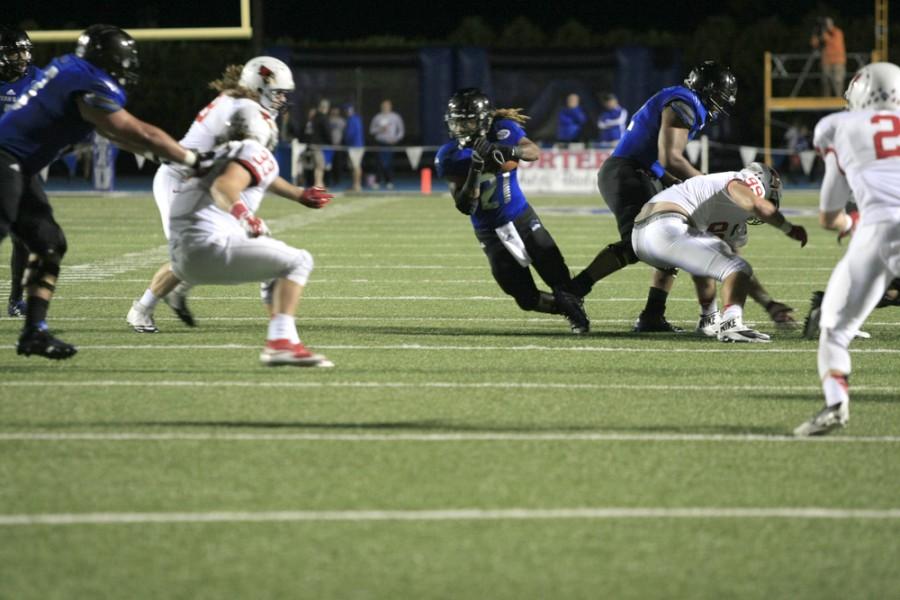 Red-shirt senior Shepard Little runs the ball during the Mid-America Classic game against Illinois State on Sept. 19 at O'Brien Field. The Panthers beat Austin Peay 40-16 Saturday Oct. 3rd at Govenors Stadium in Clarksville Tenn. Little ran 96 yards and got one touchdown during the Austin Peay game.

There was nothing small about the way Eastern running back Shepard Little and the Panthers played in Saturday’s 40-16 victory of Austin Peay. The red-shirt senior led the Eastern rushing attack with 96 yards on 19 carries and a touchdown.

But that wasn’t the only way he impacted the outcome on a rainy day in Clarksville, Tenn.

With just over two minutes remaining in the first half, Little returned a punt 33 yards to the Austin Peay 31-yard line. Backfield mate Devin Church would end the ensuing drive with a one-yard touchdown run to give Eastern a 34-10 lead going into halftime.

Little also ran 53 yards on a screen pass in the third quarter, which put the Panthers in the Governors red zone. However, the Panthers failed to capitalize on that big gain and lined up for a field goal on fourth down.

Freshman punter Mike Bernier took the snap on the attempt, and tried to fool the Governors’ defense with a pass. His pass was caught by redshirt sophomore tight end Addison Bounds for no gain. Eastern would score one touchdown in the second half, but were able to reach the end zone five times in the first half.

That drive was sparked by a 40-yard pass from senior quarterback Jalen Whitlow to redshirt junior wide receiver Isaiah Nelson. The duo would connect one more time later in the first half, when Nelson caught a 31-yard touchdown pass.

Whitlow lofted the ball to the corner of the end zone, where it just avoided the arms of the Austin Peay defender, and landed in the hands of Nelson to give Eastern a 27-10 lead. Whitlow finished the game 15-for-30 with 266 yards and two touchdowns. He also ran for 40 yards on 14 carries, and threw an interception.

Church was also a beneficiary of a Whitlow touchdown pass. The redshirt junior capitalized on an Austin Peay unsportsmanlike conduct penalty, with a 21-yard touchdown.

The Panthers outgained the Governors 527-309, while holding the Governors passing game to a mere 41 yards.  Austin Peay quarterback Trey Taylor completed 6-of-24 passes, and was sacked once by senior defensive end Thomas Coronado.

While the Panthers shut down the Governors passing game, they struggled against the running game, particularly against running back Kendall Morris. Morris rushed for a career-high 141 yards on 25 carries, which included a 74-yard dash to the end zone, to shorten the deficit to 20-10.

It was the first time a Governor player had rushed for more than 100 yards since last season.

It was also the first time that offensive lineman Scott Taylor scored a touchdown in his collegiate career. The redshirt junior recovered a fumble by graduate student running back Jerron Seymour, and ran it in for a 12-yard touchdown with 30 seconds left in the game.

Eastern will host Southeast Missouri at 1 p.m. on Saturday at O’Brien Field for Family Weekend.