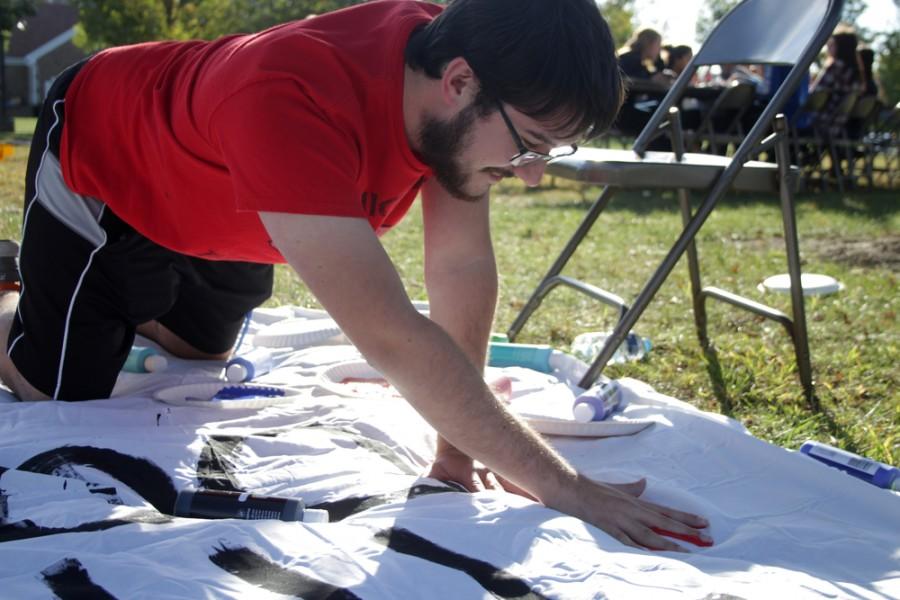 Henry Schmidt, a senior biological sciences major, puts his handprint on the “These Hands Don’t Haze” Banner during the Unity Banner Anti Hazing Event on Thursday in Greek Court.

National Hazing Prevention Week came to a close at Eastern with the Greek Unity Barbeque and the creation of an anti-hazing banner Thursday in Greek Court.

The Interfraternity Council put the barbeque event together, and it was designed to spread awareness for hazing prevention on Eastern’s campus.

The event featured food, games, music and other activities for Greek students to come together as a community.

The creation of the banner allows members of the community to see that Greek life at Eastern is against hazing practices, Jevitz said.

“Greek life at Eastern doesn’t haze,” Jevitz said. “We are taking a stand against hazing. The community has decided to rule out hazing and so it makes people who aren’t in Greek life feel more comfortable to join Greek life and to remove the myth.”

For the event, students came together in the center of Greek Court to place their hands in paint and place them on the banner.

Students lined up after participating in other planned events to place their handprints on the banner.

Michael Hartung, vice president of public relations for the Interfraternity Council, said that the meaning behind the banner was to show that “these hands don’t haze.”

“It’s all anti-hazing because that’s how we feel,” Hartung said. “If you put your hands with paint on the banner and say ‘hey, my hands are against hazing,’ it’s a symbol.”

“A lot of people don’t think about it, but it’s a pretty big problem around the nation, especially in fraternities,” Hartung said. “I think people just look at it and think about it. That’s the best kind of thing we want to spread.”

Hartung said he was surprised with how many students attended the event as two grills were being used to cater to a long line of students in the center of Greek Court.

Students who attended the event gave their thoughts on the banner and the importance it has to the Greek community.

Junior journalism major Jack Arkus said the banner will have a positive effect for the Greek community.

“If everyone can partake in something so simple as dipping their hands in some paint and stating that they agree with others from a different organization then I think that the Greek community can make that contribution and agreement that we’ll have a brighter future,” Arkus said.

Senior English major Casey Repplinger said the banner will show the Greek community coming together for the common cause of preventing hazing in organizations.

Repplinger also said the banner will have a great impact on the community if it is displayed in a place where students and members of the community can see it.

Hartung said that the banner would help spread awareness by showcasing the banner on one of the Greek houses.

Jevitz added the banner will hang on the Sigma Alpha Epsilon or Delta Tau Delta house once it is completed.

Jevitz said that although the National Hazing Prevention Week is coming to an end with the creation of the banner and unity barbeque, the conversation must go on beyond the week.

“It should be an ongoing conversation, not just this week because hazing is a problem that occurs all over the country,” Jevitz said. “It is something that needs to be addressed by the Greek community.”