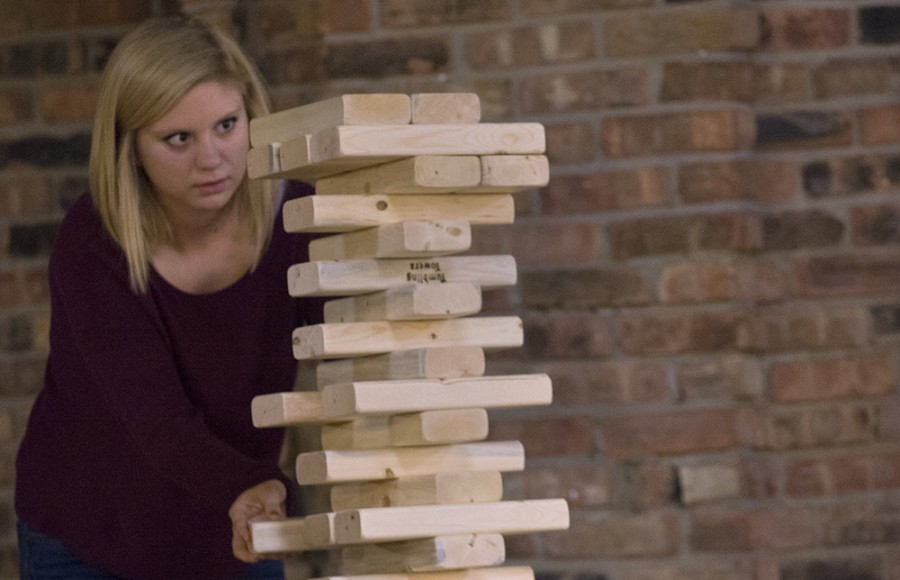 Fallon Kitchens, a freshman undecided major, watches as the life-size Jinga blocks wabble during the third day of ROC Fest in 7th Street Underground on Wednesday.

People gasped, gawked, and cheered for their halls as they competed in the giant Jenga Tournament at Residence Hall Associations’ Funky Fresh Game Night Wednesday.

The Game Night was part of the RHA’s Residents On Campus Fest, and included Apples to Apples, Candy Land, Uno, and Jenga along with the tournament.

Each hall was able to enter two people from their hall into the giant Jenga tournament to play each other in brackets of two.

“Don’t knock it over,” Tionne Cain, a freshman English major playing for Taylor Hall, told her partner as she took out pieces of the Jenga tower.

Cain said she had never even played regular Jenga before the Game Night.

Larken Parr, a geography major from Stevenson Hall, said he did not have a strategy going into the tournament after pulling out a block that almost made the tower fall.

“I just did a very gutsy move, that was bold,” Parr said. “That (block) should have gone down.”

Kaelene Goettelmann, a freshman biological sciences major, said her strategy was to not lose.

Members of each residence hall present cheered on their competitor.

“I’ve got the whole Taylor hall council yelling at me,” Cain said.

Emma Mulholland, a freshman pre-business administration major, was the only person from Pemberton in the tournament.

She said she felt a little more pressure since she was a single player in a roomful of teams.

“I think I’d be a little more relaxed if I had someone else with me,” she said.

Morgan Blackmore, the Illinois and National Communications Coordinator for RHA, joked with Mulholland, saying if she screwed up, she would screw up for her entire hall.

Mulholland was still able to last for a longer time than she expected in her round, with many people watching her and cheering her on.

Sarah Bergin, a freshman business administration major, said she came because she participated in all the ROC fest event so far.

“The girls on my floor were all like ‘hey, let’s go, they have game night,” Bergin said. “It’s just a fun thing to do and better than sitting in your room of course.”

She said her floor on Taylor was really participating in ROC fest so far.

“I thought it was really cool that they had giant Jenga,” she said. “I didn’t participate in the tournament, but me and my roommate played for a little bit.”

Bergin was able to made friends at ROC fest, meeting some at bingo Monday night.

“We just kind of sat at a random table and we met some new friends, so that was pretty neat,” she said.

Bergin said living on campus, the university is more than just a school; it’s a home for four years.

“Especially being from a small town coming here, it’s a bigger community and so meeting people is definitely a key part of being here,” Bergin said. “I think ROC fest really helps with that.”

“Someone will just come to you and be like, ‘hey, let’s play checkers,’” she said.

Niev Hans, a freshman marketing major and secretary of RHA, said the showing for the Game Night was better than she expected.
“I think there are a lot of people here who had a lot of fun with each other,” she said. “I tried to talk to as many people as I could, and just really bond with everyone.”

Hans said she met many people through ROC fest.

“It’s great to get that involvement,” she said.