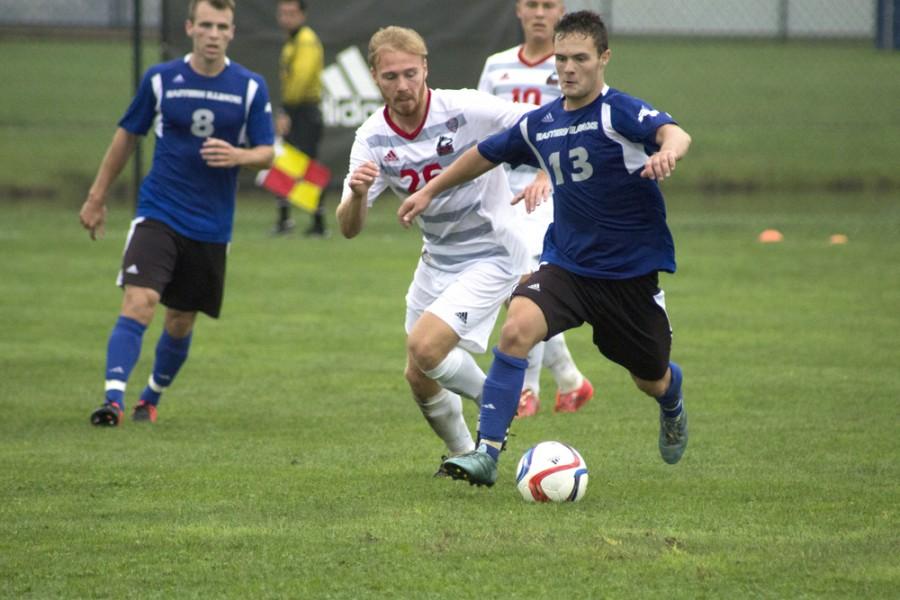 Freshman forward Trevor Kerns moves the ball up the pitch during the game Tuesday against Northern Illiniois University at lake Side Field. Kerns had one shot on goal.

Eastern fell 3-2 to Northern Illinois in double overtime Tuesday, despite a two-goal rally in the last five minutes of regulation play.

With the loss, Eastern is now 2-6 on the season. The Panthers have fallen in two-straight games by way of a double-overtime goal at home.

The comeback that led to overtime was capped off by sophomore forward Justin Oliver in the 88th minute off of an assist delivered by sophomore midfielder Dominic Recca after a free kick. It was Oliver’s second goal of the season.

Previous to that, Eastern got on the board with a goal scored by junior midfielder Davis Wegmann in the 85th minute.

As overtime began, it was clear that momentum was on Eastern’s side.

In the first overtime, Eastern exerted a lot of energy and created numerous chances to score.

They earned a corner kick in the 95th minute and, just moments later, Wegmann came very close to posting his second goal of the game, but the Northern goalkeeper managed to save it.

In the second overtime, things appeared to sway in the favor of Northern.

Red-shirt junior goalkeeper Ben Feltes, who was making his first start of the season, made two saves while facing pressure from the Northern attack throughout the period.

Despite allowing the late goal, Feltes made eight saves during the game and was clean for almost 104-straight minutes.

The two goals he allowed in regulation both occurred within the first six minutes of the game. The first was off of a penalty kick and the second was the result of an interception behind Eastern’s defense.

Feltes adjusted and maintained despite a slippery surface and 19 total shot attempts from Northern.

The Eastern defense had to face 21 Northern corners and did not allow a single one to lead to an immediate score.

Coach Kiki Lara was disappointed in the loss, but he was still satisfied with his team’s energy and determination.

“We started off slow,” Lara said. “But we showed a lot of resiliency and put ourselves in a position to make it a game.”

Lara felt that his team deserved to earn a better decision than the one they received.

He also thought his opponents may have become relaxed a bit right before the comeback began but thinks his team forced the issue.

“We were just focused on us, not on what (Northern) was doing,” Lara said.

Despite the loss, Lara did point out positives associated with his team. He was proud of the comeback effort and the team’s ball movement.

Eastern will have a chance to get back on the winning side of the results as they travel to Missouri State Tuesday. Missouri State is currently 2-0-1 at home.