Students experience the rollin’ nightlife of the 90s 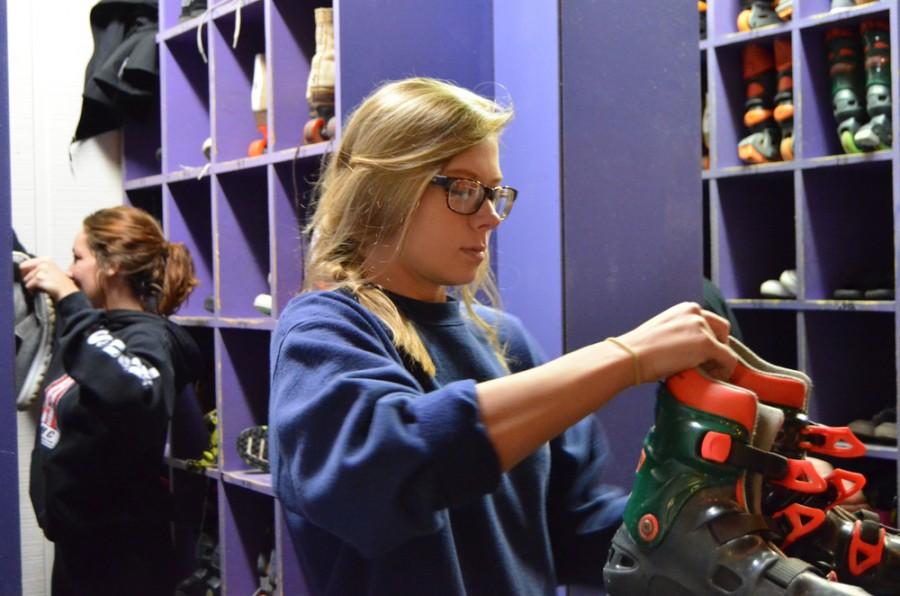 There were flashing lights and a feeling of excitement in the air as students of all ages enjoyed themselves on and off the skating rink.

Pizza was being served as music from the late ‘90s played through the speakers.

Joe Johnson, a senior kinesiology and sports studies major, attended the ROC Fest skating event just to get a break from schoolwork.

“It’s not every day you can go out on a Tuesday and have a little fun,” Johnson said. “Especially with schoolwork getting really busy around this time.”

Johnson said this was his last semester so he wanted to participate; he said it was nice to see his friends from his floor.

“I haven’t been skating for a long while and I am trying to get the hang of it again,” Johnson said. “I used to rollerblade a lot in the late ‘90s.”

Roller skates were handed out to everyone, but unfortunately for Alyssa Tillmon, a freshman political science major, she was not able to skate.

“I came here to have fun and skate, but it’s really a downfall for me because they ran out of my size,” Tillon said.

Tillon said she came with her friends, but they wear different sizes so they were skating without her. Tillon said she ate a slice of pizza while she was there, but that was about it.

Jessica Handley, a junior recreation administration major, attended the event to watch her friends have fun even though she did not plan on skating.

“I wanted to have some fun and thought this was the place to go,” Handley said. “Plus I got points for my hall.”

Hadley said she was taught how to skate at one time, but her lessons never stuck with her.

Gilbert Ball, a freshman pre-medicine major, said he came to the ROC Fest event because it gave him a chance to leave his room.

“I came because I wanted to go roller skating and get out of the room, you know, leave the campus for once,” Ball said.

Ball said, even though he came alone, he met some new friends at the skating rink.

Alayna Moore, a junior psychology major, said she came to the event to get points for Taylor Hall during ROC Fest.

“I came with three or four friends,” Moore said. “We all decided to come last minute.”

Moore said it was interesting to meet new people on campus.

“A lot of time you just see the people in your own hall and people in classes,” Moore said. “This way if you fall and take someone out with you, you can actually know who they are.”

Moore said she will probably attend the boat race Thursday and she will be looking for panther babies on campus.

Moore said she met new people after she ran into them and knew a lot of the music that was being played.

“I never knew this place existed so that’s a plus, I now know where to go.” Moore said. “One more hangout to do.”