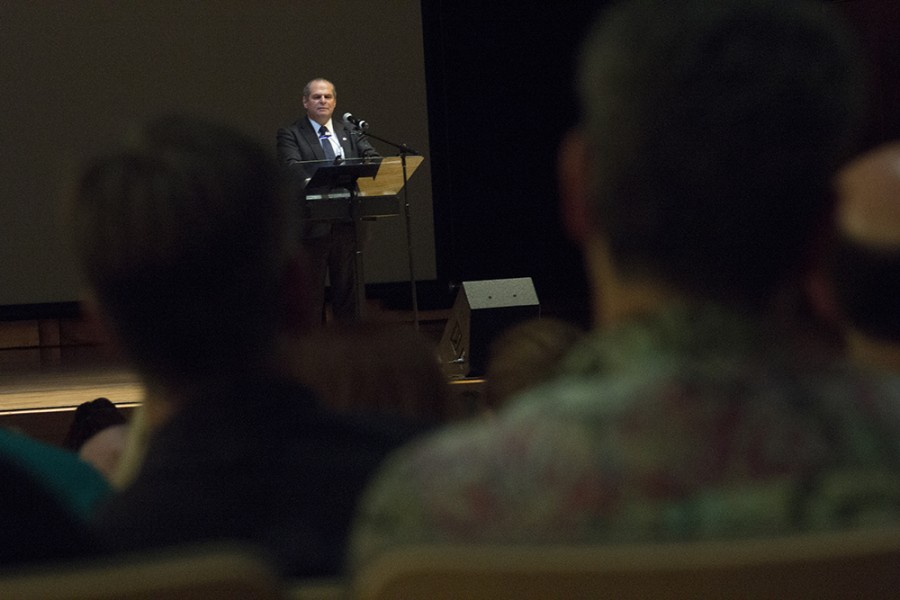 President David Glassman addresses student, faculity, staff, and community members about budget, enrollment, and community during the State of the University Address Monday in the Dvorak Concert Hall of the Dounda Fine Arts Center.

Eastern President David Glassman said he expects the university enrollment to grow and stabilize by 2017 during his State of the University Address on Monday.

Glassman also said athletics would report to the Office of the President as opposed to Student Affairs.

Glassman said the transition would provide a chance for them to take a long-needed breath.

Intercollegiate athletics received $1.6 million generated from the university’s appropriated and tuition revenue of about $90 million.

“This is down from $1.9 million a few years ago,” Glassman said.

Glassman said he cut the athletic appropriated and tuition funding an additional $320 thousand, which brought it down to a total of $1.28 million.

The student athletic fee was increased by $4.36 per-credit hour to assist intercollegiate athletics in meeting its expenses.

This action was challenging because of the decline in student enrollments, which resulted in the school getting less fee revenue.

Without an increase in athletic fees or appropriated funding, intercollegiate athletics ran annual deficits from about $300,000 to slightly less than $1 million.

“These deficits were covered, as were other deficit spending by the university reserves,” Glassman said.

Even though they had a reduction in their appropriated funding, Intercollegiate Athletics has had to maintain a balanced budget with the new student fee rate.

Director of athletics Tom Michael said he did not know if the transition would change what everyone sees on the outside about athletics.

“What we’re trying to do is make athletics to fit the university better and certainly reporting to President Glassman is something that I’m excited about,” he said.

Jonathan Blitz, president of the University Professionals of Illinois, said a part of the address that surprised him was the transition of athletic reports from the Office of Student Affairs to the president.

“I think that was probably a bit of welcome news for many,” Blitz said.

In his speech, Glassman spoke about his vision for the future, including what he called the “Pathway to Success” and how, to achieve the Pathway,the university needs to be able to make changes in their operations and procedures and become flexible to an adapting environment.

“We must urgently explore altering our existing programs when appropriate, as well as developing new programs,” Glassman said. “In order for us to plan our university’s future, we must realistically define our optimal enrollment size given current demographics, market-place competition, and our own interests in financial sustainability.”

Glenn Hild, the dean of the College of Arts and Humanities, said he believed Glassman spoke in broad terms but explained Eastern’s situation correctly.

“I anticipate that there will continue to be some reductions in faculty to achieve those goals,” Hild said.

Total enrollment for fall 2015 is 8,520, with the current senior class the largest of the four classes.

“As our new freshman classes meet or exceed the previous year’s freshman class, we should be able to stabilize our total enrollments and begin to grow them by 2017,” Glassman said. “To do so, it will be essential that we deploy adequate resources to our marketing and admissions efforts.”

Bob Martin, the vice president for university advancement, said the news of Eastern planning to spend more on marketing was excellent news for his staff.

Eastern spends $700,000 on marketing, which is substantially lower than most of the four-year public institutions within the state, said Glassman.

“We’ve got a great story to tell, but we need more people and more revenue to tell it,” Martin said. “Our marketing budget is tiny, but (Eastern does) a good job of using every available dollar to get the word out.”

“I think since he’s come here he’s tried to be extremely transparent about everything,” he said. “We need to get in front of more students earlier in the process and by increasing our marketing resources we’ll be able to do that.”

Glassman said Eastern has created its brand in the past by maintaining low student to faculty ratios.

“The result has become an immense financial challenge for Eastern to maintain these very low ratios while student enrollment revenue continues to go down, exacerbated by a steady annual decrease in state appropriations,” Glassman said.

During this year, Glassman plans to meet with academic and staff leadership to hear what they think are appropriate ratios given the university’s financial position.

The budget for the 2016 fiscal year revealed a deficit of $13 million dollars if the state keeps the appropriation of a reduction of 6.5 percent.

“In order to balance the budget, funds were annually supplemented from university reserves,” Glassman said.

This was not a sustainable business model without major positive changes in revenue and the significant reduction in university reserves left the university in a more precarious state, Glassman said.

“There was no alternative, but to immediately develop a plan that would move the university toward a balanced budget,” Glassman said. “The plan called for right-sizing our university.”

The reductions through layoffs, furloughs, decreasing operating budgets, moving salaries and other measures lowered the expenses for fiscal year 2016 by about $10 million.

Without knowing the state appropriation for this year and other factors, it cannot be predicted whether additional employee layoffs will be necessary, but Glassman said they would be smaller than the ones seen previously.

Jeannie Ludlow, coordinator of women’s studies, said she appreciated Glassman’s call to the community to be involved with the university, and she agreed that Eastern has a vital position in Coles County, not just Charleston.

Ludlow said Glassman’s language about “right-sizing” the university was insensitive.

“I think ‘right size’ is harsh language when people have lost jobs, because it makes it sound like you weren’t necessary, and that’s not a message that is kind,” she said.

“I thought it was one of the best presentations by a president I have heard at EIU,” he said. “Some of the things that he said are unfortunate, but I think these things needed to be said.”

Stephanie Markham contributed to the article.