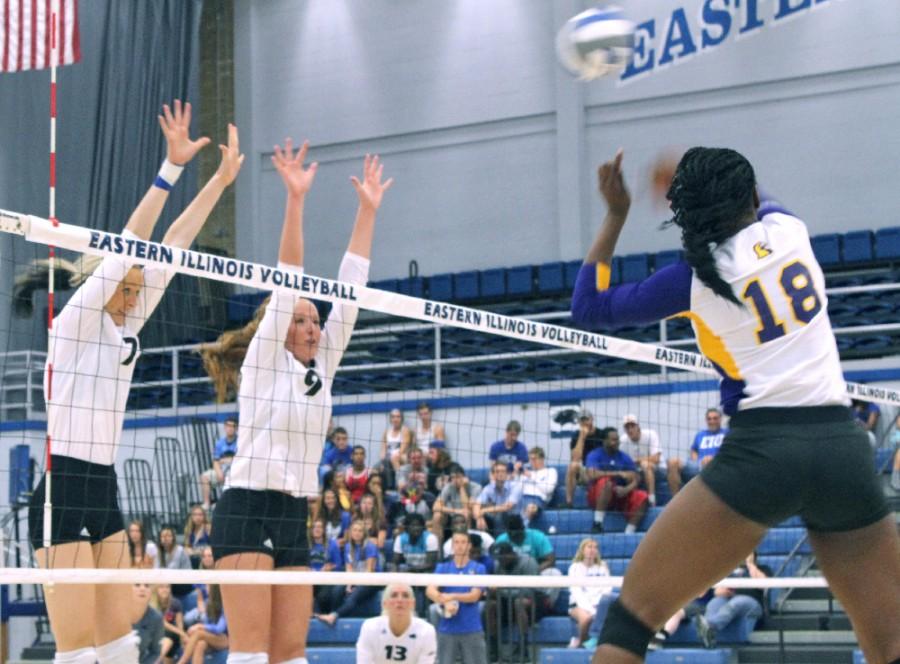 Freshman hitter Taylor Smith and sophomore hitter Allie Hueston attempt to block the hit from sophomore hitter Kellie Williams of Tennesee Tech in the third set of the Panthers first conference game of the season Friday inside Lantz Arena.

Things could not have gone better for the Eastern volleyball team last weekend. Senior Stephanie Wallace broke the digs record, while the Panthers grabbed two wins to start 2-0 in conference play.

Eastern did not lose a set over the weekend as they won in straight sets against both Tennessee Tech and Jacksonville State, 3-0.

The Panthers will be riding that confidence coming into the match with Southern Illinois- Edwardsville on Wednesday but also know it is time to put all of their focus on the Cougars.

“Without a doubt the focus has been on SIUE starting (Monday) in practice,” Eastern coach Sam Wolinski said. “But I think we take that confidence with us just knowing that we were able to put away two opponents in three sets, that’s really important. You have to take that and build on that.”

She added that this is a whole new match and anything can happen.

SIUE is currently 1-1 in conference play, and they also took on Tennessee Tech and Jacksonville State over the weekend.

The Cougars beat the Gamecocks in five sets, 3-2, but fell to Tennessee Tech, 3-2.

Even though the Panthers dominated those schools and SIUE lost to one and barely beat the other, Eastern knows none of that matters now.

“That all goes out the door,” Wolinski said. “We have to travel there, it’s that travel partner game, it’s our first road match so there’s just a different scenario and I think that goes into it. We’ve just got to be ready to go so as soon as we get on that court, ‘boom’ we’re ready to play and bring our A-game there.”

Playing on the road is different and not a big deal for the Panthers except that it is a mid-week game.

Wolinski said she wants the team to have the same consistency they showed over the weekend, which was focus in the last two days in practice.

They did very well with their serving, their side-out game, serve-receive, and their block game, but they are always looking to find ways to get ‘one percent better each hit.’

Just like Tennessee Tech and Jacksonville State, Edwardsville has a strong right side so the Panthers are ready for that. But the Cougars also have a strong middle, something the Panthers have not seen yet.

Senior Kristen Torre is the woman in the middle for the Cougars and Wolinski said that she is their go-to person on the court.

If she gets the ball, the Panthers know they will have to go attack on the block.

The Panthers will look to start OVC play 3-0 and remain at the top of the conference. The match will start at 6 p.m. at the Vadalabene Center in Edwardsville.