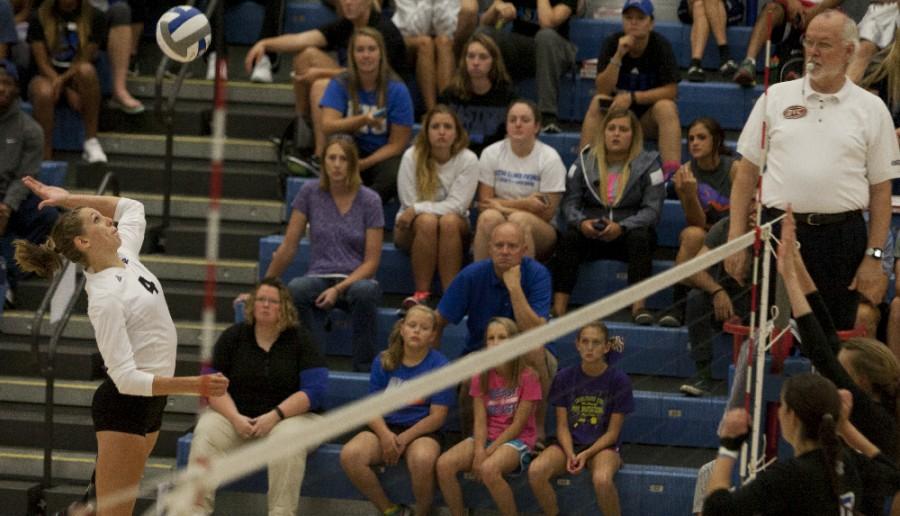 Senior outside hitter/setter Abby Saalfrank had nine kills and four errors out of four sets played during the Panthers' 3-1 loss to Indiana State on Sept. 1 in Lantz Arena.

The Eastern volleyball team is set to start conference play this weekend with a match on Friday against Tennessee Tech and a match against Jacksonville State on Saturday.

The Panthers will be hosting both teams at Lantz Arena.

After playing four-weekend tournaments, the team is excited to have the games count for real and especially open up at home.

“We’re very excited to start conference play this week,” coach Sam Wolinski said.  “It’s a great chance to be at home so we’re excited about that, to open up conference in Lantz in front of our fans.”

Wolinski added that the team had a good week of practice and went over things that they need to do to get them ready for their conference opponents.

Tennessee Tech, just like Eastern, played non-conference games to prepare for the conference part of the schedule. Tennessee Tech went 2-11 in that time but the Panthers know they have some strong parts to their game.

“They have a very strong right side,” Wolinski said. “Number 29 is 6’4” so she’s a tall player. She’s leading her team in kills, she does it from the front row and the back row as well, so we definitely need to be able to contain her.”

Wolinski added that the Panthers have to also watch out for their outside hitters and middle.

Jacksonville State posted a 7-9 record in their non-conference games.

Jacksonville also has a 6-foot-3-inch right side who is the team’s go-to and who Eastern will be watching out for as well.

The Panthers have been preparing for these two teams that greatly rely on their right side.

“We worked on our blocking schemes and what we need to do to be able to contain them offensively,” Wolinski said.

Eastern’s setters Taylor Smith and Marah Bradbury push the tempo for Eastern’s offense and will be key contributors this weekend.

Senior libero Stephanie Wallace anchors the back row and had a very strong weekend at the Oakland Invitational.

“I think it’s important for our outsides to be consistent in both matches,” Wolinski said.  “That way if we’re running a three-hitter offense in the front row the entire time, it’s going to be really hard for both teams to figure out who they zero in on.”

The Panthers are ready and excited to open OVC play at home and Wolinski describes it as ‘another chance to celebrate.’

“Everybody is 0-0 going into conference play,” Wolinski said. “We want to keep playing going into December so our goal is to win OVC championship and to get a NCAA tournament bid.”

The Panthers’ match against Tennessee Tech will start at 7 p.m. Friday. They will take on Jacksonville State at 2 p.m. Saturday.