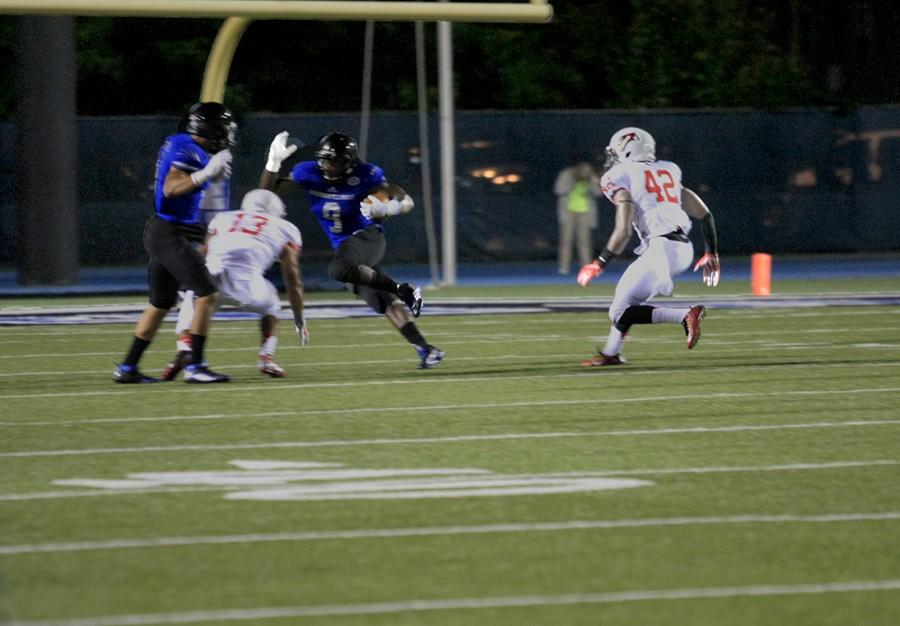 Redshirt junior Devin Church had a total of 109 rushing yards and one touchdown during the Mid-American Classic against Illinois State Saturday.

Last Saturday in the home opener for Eastern football, fans saw a different offense than those of the previous years. Returners such as Shepard Little and Jalen Whitlow can still be seen in the backfield, but a new face emerged in a big way against Illinois State.

Redshirt junior Devin Church rushed for 109 yards on 20 carries and also scored a touchdown in his first game at O’Brien Field. He also caught four passes for 34 yards.

The Panthers picked up Church as a transfer student and did so in a different way.

“We had a friend of his from his hometown on the team last year,” Dameron said. “Through him they talked and he contacted us, and did everything he had to do to transfer.”

Church was from Detroit, but went out of state to begin his college career at Illinois. For three years he suited up for the Fighting Illini, but rarely saw playing time, except on special teams as a kick-off returner. Senior cornerback V’Angelo Bentley was the main returner.

“I recall when V’Angelo got injured in the Penn State game, I was the starting kick returner,” Church said. “Fortunately they kicked it out of bounds and then deep, so I didn’t have the chance to bring it out.”

When he arrived at Eastern this spring, Church knew that he wanted to continue being a kick returner. After all he had spent his whole high school career doing those duties.

Church played at Brother Rice High School in Detroit, and led his team to the MHSAA Division 2 state title. He rushed for 244 yards and three touchdowns in the championship game, in the same town where Barry Sanders became one of the all-time greats.

“Barry Sanders was definitely somebody I looked up to,” Church said. “He wasn’t the biggest guy, but he was real shifty.”

Church said that he also idolizes St. Louis Rams wide receiver Tavon Austin and Pittsburgh Steelers running back Le’Veon Bell. Church said that he tries to model his game after Bell because of the way Bell can catch and run with the ball.

However, his head coach said that Church has a running style that is all his own.

“He’s got his own style and we felt like he’d be the kind of guy that could come out of the backfield and catch a lot of balls, which he has,” Dameron said. “Everything we hoped he could do, he’s doing it.”

Church has also experienced adversity in his first year as a Panther. Against Illinois State he fumbled the ball in overtime on the Panthers first drive, which led to a game-winning field goal for Illinois State.

That mistake has not slowed him down, or changed the way the Eastern coaching staff uses him. Throughout this week at practice, he continues to take reps with the first team, and running as if everyday is a step forward.

“I don’t want to really get concerned about my stats,” Church said. “I want to play in that national championship game and win the OVC. I know we can and that’s what I’m really focused on.”