Men’s soccer shut out by Kentucky 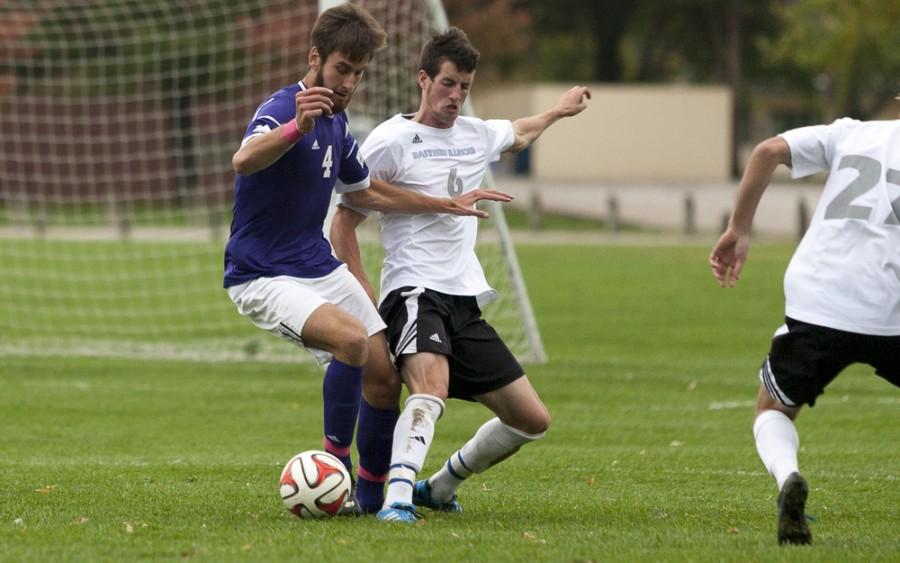 Senior Kyle Callendar fights with a Western Illinois opponent during a game on Oct. 18, 2014 at the Eastern practice field.

The Eastern men’s soccer team was held scoreless for the second time in as many games Tuesday in Lexington, Ky.

Eastern was still in it at halftime trailing just 1-0, but five goals in the second half for Kentucky sparked them to an easy 6-0 win. Eastern now falls to 2-4 as Kentucky improves to 4-2-1 on the season.

There was one goal in the first half scored by sophomore Stefan Stojkovic, assisted by junior Napo Matsoso. This was the first goal of the year for Stojkovic, but he was not done yet.

Matsoso scored the first of many goals in the second half in the 51st minute as he drove past senior defender Kyle Callender, who was still closely defending the All-American at the hip when he took the shot for his second goal in as many games.

Kentucky scored again in the 70th minute with a goal from sophomore Hampus Agerstrom off of a cross from Stojkovic. It was the first career tally for Agerstrom. Two minutes later, sophomore Grant Mook also scored the first goal of his career to make it 4-0.  Freshman Xahne Reid assisted the goal for his second game in a row with an assist.

Callender said the team is still in the process of building and finding the right pieces to the puzzle at this point in the season.

“We had a new combination of guys playing along side one another and ultimately the disconnect came down to the lack of experience as well as our teams overall ability to sacrifice,” he said. “Kentucky gave a little more than we did and that ultimately cost us.”

Three minutes after scoring his first career goal, Mook scored again with an assist from Agerstrom. While still preserving a shutout, Kentucky pulled All-American senior goalkeeper Callum Irving in the 80th minute in favor of redshirt sophomore Stuart Ford who saw his first action of the season. This was the third shutout of the year for Kentucky.

Sophomore goalkeeper Mike Novotny made six saves in the game for Eastern, including a great stop of a free kick from junior Charlie Reymann in the 84th minute. Novotny is now the sole owner of the ninth most minutes played by a goalkeeper in Eastern history.

Continuing his impressive day, Stojkovic scored his second goal of the game in the 87th minute to really pour it on. Freshman Cooper Whitfield was credited with his first career assist on the goal.

Callender said the team plans to get back to work and start focusing on the next game against Oral Roberts on Saturday.

“Until tonight, we grew as a team every game,” he said. “We need to get back to the basics and focus on our identity.”

Kentucky finished with 21 shots, including 12 that were on target. With the high scoring performance, Kentucky earned its largest win since 2008 and tied for the most goals scored in one-half with its five-goal outburst.