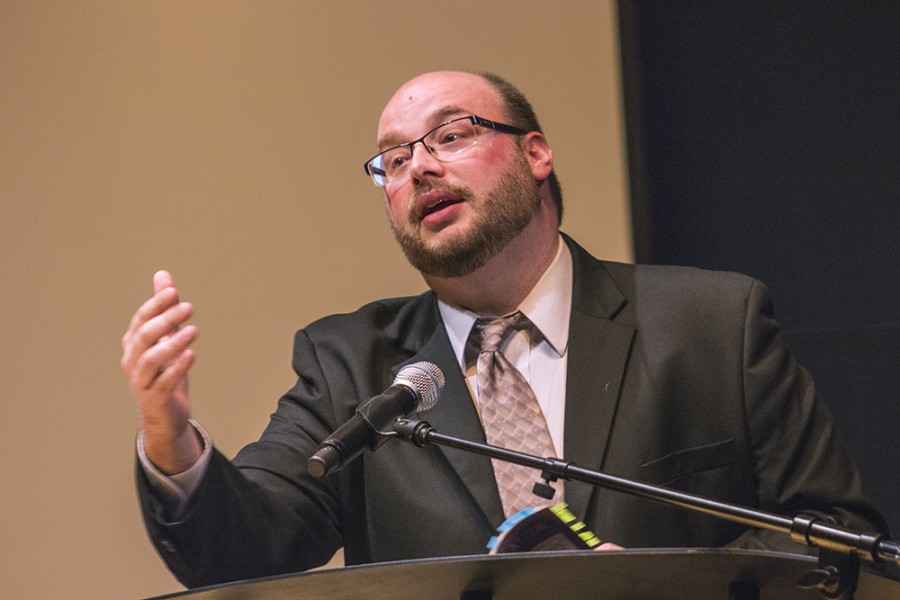 Mathew Minicucci recites his poem, “Beta”, an unpublished piece about break ups, in the Recital Hall at the Doudna Fine Arts Center on Monday.

During the Allen Neff Memorial Poetry reading, Wyn Cooper and Matthew Minicucci read some of their own written work to the members of the Eastern community.

The two poets maintained now only a professional atmosphere, but there was also some humor added to some of their works.

This was the first time both men gave a poetry reading together.

Charles Wharram, the director for the Center for the Humanities, started off the reading by thanking the Nancy Henning Memorial Poetry Reading series, the Lynch Humanities Lecture Speaker Series, and the English department for sponsoring the evening’s poetry reading.

Wharram then passed the microphone onto Charlotte Pence, an English professor, who gave brief introductions for both Minicucci and Cooper.

Minicucci was the first to come on stage to deliver some poems from his first full-length poetry collection, “Translation.” Some of the works he read included “A Whale’s Heart,” “Hector” and a six-part poem titled “On Anger.”

Even before he started reading, Minicucci was joking with the audience and made the atmosphere feel a little less professional and more humorous.

Before reading each poem, Minicucci gave a brief description of what inspired him to create his work.

“I was asked beforehand why ‘Translation,’ why does that happen,” Minicucci said. “It’s interesting. I’ve never ever thought I would be in a situation like this.”

Minicucci said his original plan was to study languages in college and become a translator.

“I was kind of terrible at it,” Minicucci joked. ”What took people four hours (to translate), took me eight hours.”

Minicucci said after that, he took a step back and began writing about his family and this lead to him writing “Translation.”

“Translation is just as much sort of me, or the speaker maybe, attempting to translate my ridiculously crazy parents,” Minicucci said.

Not all of Minicucci’s works were written solely on his family; his poem, “Hector,” was inspired by the tale of the Iliad and the relationship between Hector and his brother, Paris.

Minicucci said the inspiration behind these works came from his experiences with relationships and break ups.

After Minicucci finished his readings, Pence came back on stage to introduce the second speaker, Wyn Cooper.

Cooper read some works from his first book, “The Country of Here Below” and talked when he visited a poetry class earlier in the day and how his poem became a song.

Cooper read his poems “Opal, Wyoming,” “Forty Words for Fear,” “Postcard from the bus” and “Chaos is the New Calm.”

Unlike Minicucci’s work, Cooper’s poems took on a much darker tone; however, the messages and the feeling conveyed in his work were recognized.

Cooper said his postcard poems came from an assignment given to him by one of his former students.

He had to write a poem about someone or something quirky in his hometown.

From that, he had the idea to write similar postcard poems about other places he knew.

Jeannie Ludlow, a professor of English and the coordinator of Women’s studies, was in attendance during both poetry reading.

“I thought they were both really interesting, and I like both poets very much,” Ludlow said. “I liked how they were different from one another, I think that Minicucci was having a lot of fun up there and I think Cooper had more wry kind of humor.”

Ludlow said Cooper was funny as well, but he managed to hide his humor within his language and you had to really look more into what he was writing.

“I think it’s good for an audience to be challenged to listen to different kinds of things all within the same reading,” Ludlow said.

Following the readings, both men stood around for a brief Q&A session from the audience where they were asked to give some advice to future poets.

Minicucci said he agreed with everything Cooper had said.

“I meet a lot of writers who are ’too cool for school’, especially younger writers who like to hang out in coffee shops and write so someone can ask them what they’re writing,” Minicucci said. “It’s just an excessive amount of work; so I’m a big believer in veracious reading, and never stop writing, there’s no such thing as writer’s block.”