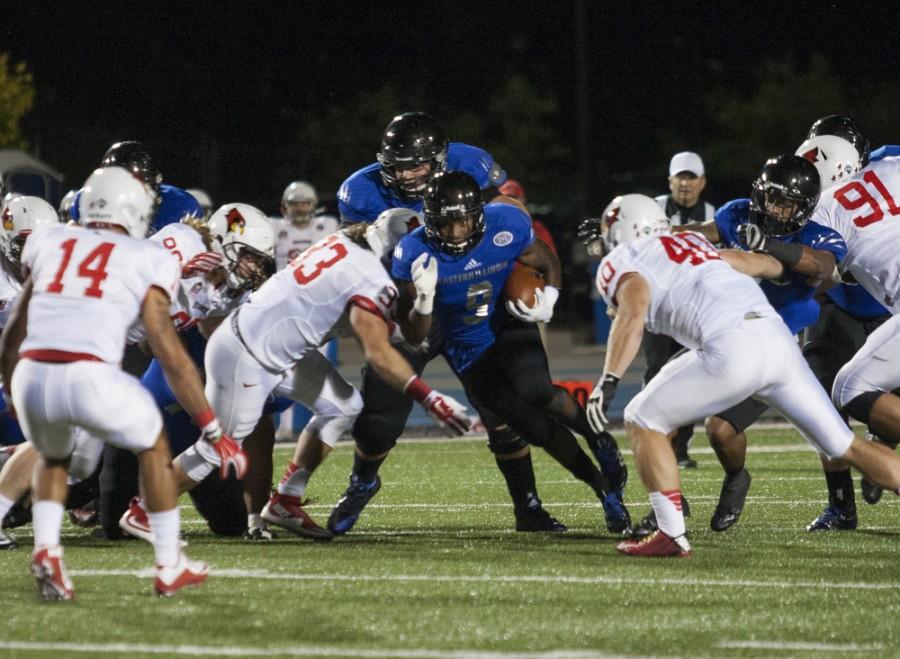 Red-shirt junior running back Devin Church had 109 rushing yards and a touchdown during the Mid-American Classic against Illinois State University on Saturday at O’Brien Field. The panthers lost to the redbirds 34-31. The panthers are now 0-3 overall.

Late mistakes cost the Eastern football team a chance at an upset over No. 5 Illinois State Saturday at O’Brien Field.

After the Church fumble, Illinois State kicker Sean Slattery gave the Redbirds a 34-31 victory after making a 31-yard field goal in overtime.

Church was one of several bright spots on the Panthers offense, rushing for 109 yards on 12 carries, and also catching four passes for 34 yards.

He also scored on a five-yard touchdown run to give the Panthers a 14-10 lead in the first quarter.

Eastern coach Kim Dameron said that he thought Church played extremely well and only made one mistake the whole game.

“I told Devin after the game, ‘Forget it, let’s go.’ Because I don’t want him worrying about it,” Dameron said. “I know there’s not anybody on the planet that feels worse about it than he does.”

Church would not be the only player or coach feeling bad about the loss. Redshirt senior defensive tackle Dino Fanti said that while the Panthers did improve from the first two games of the season, in which they lost by a combined score of 74-5, the game’s outcome will also overshadow the effort made.

“Well we improved, but you won’t see that until Sunday at film,” Fanti said. “Right now it’s just an ‘L’ and losing is not okay, and the whole team knows that it’s not okay.”

Dameron also said that he doesn’t believe in “moral” victories, especially because a win over the Redbirds would’ve been a big win for the program and the season. Dameron was pleased with the Eastern running game, which rushed for 209 yards on 48 carries.

“We felt there were times in the game when they were just gassed, so that’s what we tried to do, which was get fresh people in there and go,” Dameron said. “Shep did a heck of a job, and ran extremely hard.”

Nelson said that the ultimate goal for any game is to win and not just to improve on past performances.

One area that Dameron believes the Panthers need to improve on, is their third and fourth down defense. The Redbirds were 8-for-19 on third down conversions and a perfect 3-for-3 on fourth down conversions. All three first down conversions resulted in runs of 14, 10 and 15 yards by senior quarterback Tre Roberson and senior running back Marshaun Coprich.

Coprich led the Redbirds rushing attack with 178 yards on 33 carries and two touchdowns, while Roberson rushed for 28 yards on 10 carries. Roberson also threw for 204 yards and touchdown.

“The biggest difference in the game and why we weren’t ahead was because of third down,” Dameron said. “We’re not anywhere close to where we need to be. But I felt that our effort was tremendous.”

The defense did make a number of key plays, including a 20-yard interception return for a touchdown by junior linebacker Seth McDonald. McDonald picked off Roberson and raced to the end zone to shorten the Illinois State lead to 24-21 heading into the half.

McDonald and senior cornerback Anthony Goodman led the defense with 12 tackles. This was the third straight game that McDonald has recorded double-digit tackles.

“There’s no one I’m more proud of right now than Seth McDonald,” Fanti said. “That interception was a huge play for him, and it’s a huge step as a player to make a play like that.”

McDonald was named Ohio Valley Conference Defensive Player of the Week, Sunday, for the second time in three weeks.

Eastern will have a bye week this week, before traveling to Austin Peay on October 3 to begin Ohio Valley Conference play.

“Going into the bye week with a loss is tough because you’re thinking about the last game that we lost,” Nelson said. “We’ve got to get a short memory and put this behind us.”