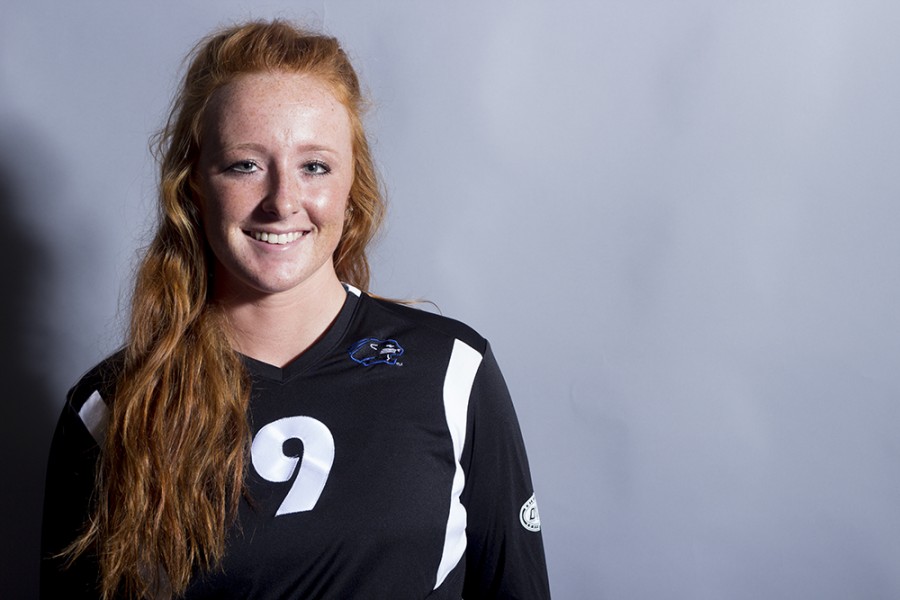 ‘’My mom got me started playing volleyball in 6th grade because she had played volleyball and I fell in love with it because of the team aspect.’’ Hueston said.

Hueston’s transition from high school to being a Division I athlete was an easy one, especially when you love the sport as much as she does.

‘’It was good, I liked it,” Hueston said. “In high school I played on a club team that was really intense. It wasn’t too big of a transition for me.’’

Now, as a sophomore, the strengths she brings to the team as a middle hitter are vital.

‘’I put up a pretty big block for the team,’’ Hueston said. ‘’And I try to channel balls to our passers.’’

Hueston was also named an All-Tourney Honoree at the first two tournaments of the year, helping the Panthers to a championship win at the Indiana-Purdue University at Fort Wayne Mastodon Invitational and a second place finish at the DePaul Blue Demons Invitational.

Hueston said she would like to be more consistent this year.

‘’I want to always stay consistent, add ability to the team, and be able to be that go-to person,” Hueston said. “When we’re in a rut, I want the team to know they can give me the ball so I can put it away and score.’’

The Panthers have set high goals for this season.

“We’d really like to host the OVC Tournament this year and win the championship,’’ Hueston said, ‘’Belmont and Murray State are going to be good matches for us.’’

The panthers have a current record of 5-5.

Coach Sam Wolinski knows how much Hueston has to offer to the team.

‘’Allie (Hueston) has been consistent for us all season long so far,” Wolinski said. “We can count on her at anytime to earn a kill or set up a huge block for us at anytime during a match. Her consistency is her strength.  She brings the same work ethic, attitude and performance each and every day to practice and matches.’’

Hueston delivers defensively as well as offensively for the Panthers.

‘’Allie is a constant threat offensively and teams will always need to prepare for and that says a lot about her ability to execute.  Three weekends in a row she has been a go to for us in the front row and has had a strong hitting percentage as well.’’ Wolinski said.

The Panthers were held winless last weekend at the Dayton Flyer Invitational but know they can’t get discouraged.

‘’The last tournament we played in, we went 0-3, but the teams we played were pretty big,’’ Hueston said, ‘’Just coming back to practice and making sure we get back on track, working as a team together, and finding a way to make the little things work will help us as a team.’’

Eastern is set to play at the Oakland Grizzly Invitational this Friday and Saturday in Rochester, Michigan.