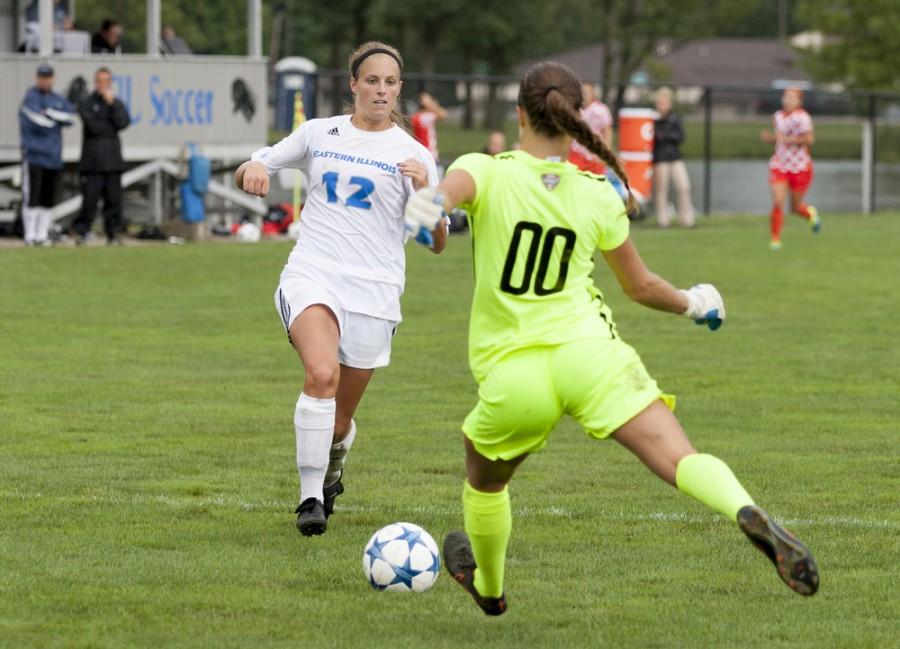 Senior midfielder Molly Hawkins had one goal during the Panthers' 3-2 loss to Bowling Green State on Friday at Lakeside Field.

After falling to a 2-0 deficit early first half, and a 3-1 deficit right before halftime, Eastern managed to pull within one on two different occasions.

Forward Molly Hawkins and midfielder Kathleen MacKinnon both found their way onto the score sheet and also gave each other their respective assists.

On a rain-soaked field, both teams committed their share of mistakes, whether it be fouls or offside calls.

At one point, head coach Jason Cherry emphasized to officials about BGSU’s numerous apparent attempts to delay the game, which eventually was carded.

“I hate to see a team be unsportsmanlike,” said Cherry, “I just wanted to make sure that everything was within the rules.”

With late opportunities arising, thanks to mistakes and yellow cards out of BGSU, Eastern had a chance to bring the game to an even score but ended up short in the end.

“We managed to hang in there until the end,” said Cherry, “We had some chances near the end but we a few too many costly mistakes.”

Despite the loss, Cherry still feels that he can pick out a number of positives from the game.

He said liked the way the team responded to the early adversity and managed to keep themselves in the game despite the early goals allowed.

Though she did allow three goals into her net, the goalkeeper, Maddie Lyon, made nine saves throughout the game in the unpleasant weather. She also posted a clean second half.

Hawkins recorded her team-leading fifth goal of the season and second assist, which is tied for the team lead.

MacKinnon had her first goal of the season by a deflecting a ball off of the BGSU keeper.

“It was awesome to finally score,” MacKinnon said, “I’m really excited to get back out there and try put more up.”

However, even with the positives that Eastern can pull away, there is still work that needs to be done, according to Cherry.

“The little mistakes are killing us,” Cherry said, “We aren’t executing enough and it’s really been hurting us.”

“We have to work on our defense,” Cherry said, “It’s going to come down to adjustments in our technique.”

MacKinnon was happy with her team’s performance, but also feels that there is still work to be done.

“I thought we played well,” MacKinnon said, “I think we were just a bit unlucky. They capitalized on our mistakes. We just need to come together and try again next time.”

With the loss, Eastern falls to 1-5-1 on the year, and is currently on a two-game losing streak. However, through their last three games, they collectively matched their opponents in scoring, 5-5.

They’ll take the field again on this Friday, as they travel to the University of Missouri- Kansas City.