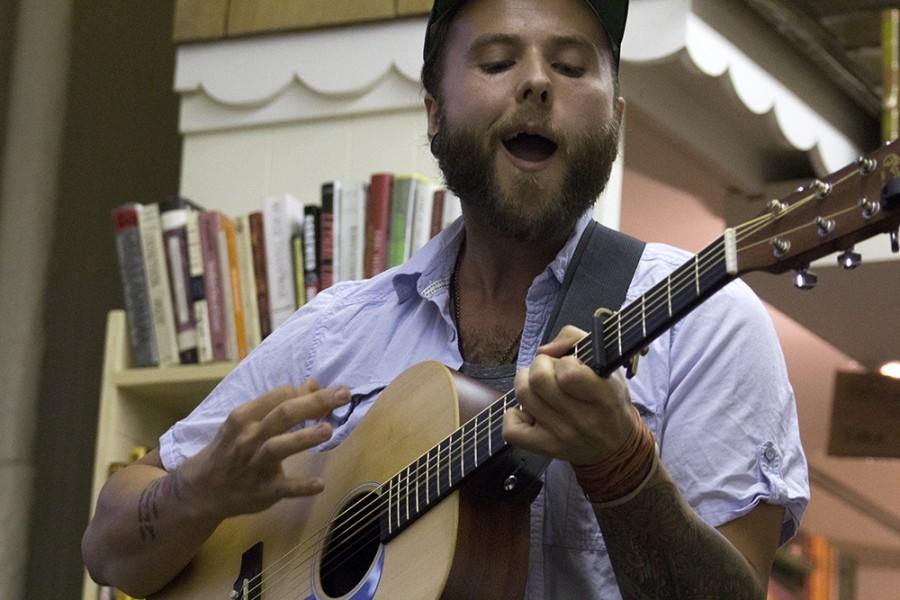 Jeremy McConnaha, a Mattoon resident, performs with this acoustic guitar for the Open Mic Night on Friday at Bob’s Bookstore. It was McConnaha’s first time performing at the bookstore.

With nothing, but his voice and an acoustic guitar, Jeremy McConnaha, 30, a Mattoon resident performed for the first time at Bob’s Bookstore. Even without the use of microphones or other audio systems, the singer managed to convey his message through his own written work Friday night.

McConnaha said he is used to playing at different open mic events.

“I play at (Jackson Avenue), I play at Common Grounds, I played at the Cowboy Monkey in Champaign,” McConnaha said. “It’s a nice atmosphere. There’s no PA system, there’s no microphones or anything like that so it’s nice to get up there, strip down with your guitar.”

McConnaha started playing drums and music when he was 16.

“I played in marching band, pep band, jazz band and then I played in bands kind of growing out,” McConnaha said. “I started touring in bands as soon as I graduated high school.”

McConnaha also said he is more nervous performing for a smaller crowd rather than a larger one.

“When it’s smaller, like tonight, you kind of see every single person looking at you, but I kind of like that too, I feel like when the crowds smaller maybe people can hone in a little bit more and hear what the message is in the song.”

“I thought he was amazing, “ Judd said. “What struck me was that he’s never been here before, and so when you see somebody new, a lot of people are nervous and act unsure of themselves, but (McConnaha) certainly didn’t act like that, he had everything down.”

Judd also said he thought McConnaha had a good voice and guitar skills.

“He had the crowd listening to him, excellent guitar playing, excellent voice, I was really surprised,” Judd said. “I think he just dominated. What got me was that I love his voice, his voice just really permeated the room.”

“I liked it. I didn’t expect to see him there,” Rollings said. “I’ve enjoyed performances of his in the past. He also showed us a new song I hadn’t heard and I thought it was okay.”

Rollings also said McConnaha’s performance on Friday was the same as his previous shows, minus the new song and lack of equipment.

“We’re hosting a show at Commons Grounds on the 18th, and I actually asked him if he wanted a timeslot for it after he played and he’s now on the bill,” Rollings said.

McConnaha said the first song he performed was the first one he wrote as a solo artist.

“I feel like everybody wants to be in love so bad and so fast, people jump in these relationships. It’s like people start dating, they move in together, they get pregnant or married or vice verse,” McConnaha said.

McConnaha also said the verse of the song are a conversation between two people in a relationship, but have ended things. The second song of the night was “A Realistic Love Song,” which talks about a guy trying to show a girl how much he loves her.

“It’s about this guy who’s caught up in this notion to talk to this girl, he wants this girl to know that he’s in love with her, so he does everything for her that I guess would be in a book on how to woo a girl,” McConnaha said.

McConnaha’s third song was titled “The Long Bright Dark” a song about one’s life is theirs to live.

McConnaha said. “That song is just kind of saying it’s a guy whose grown up and appears to be colder, but he just looks at the world more realistically through his own eyes and isn’t living it to please anybody else, just himself and his loved ones.”

McConnaha said to him, playing music brings a release of his own thoughts and point of view on life.

“I guess to be able to impact somebody else with that stuff, with something that I’m feeling or a lyric or line from a song, I feel like that would be the biggest thing for me is to know that I made a emotional impact,” McConnaha said. “That’s what music has done for me.”