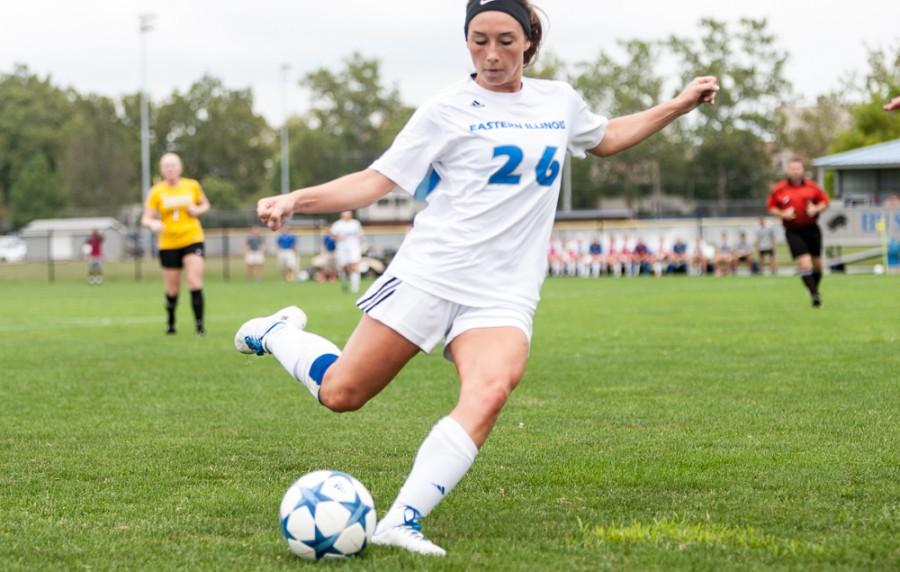 Sophomore forward Chloe Gottschalk goes to move the ball up during the Panthers' 6-0 loss to Northern Kentucky on Aug. 23 at Lakeside Field. Gottschalk had one shot and one shot on goal.

The Eastern women’s soccer team heads into its match against Indiana-Purdue University at Fort Wayne at Lakeside Field at 3 p.m. Friday.

“(IPFW) is very organized,” Cherry said. “They have a ton of discipline and speed that they’ll try to utilize.”

Cherry has addressed these key points in practice, which he has also used as a way of bringing his team together.

“Practice went really well,” Cherry said. “Before we started practice, we sat down as a team and talked. We refocused a little and looked at our progress with the goals that we set.”

The game against IPFW will be played in what is forecast to be 90-degree weather. However, Cherry says he will have his group ready for the heat.

“It does have an effect,” Cherry said. “But I think that we’re conditioned enough to be ready for those conditions.”

From their previous handful of games against Western Illinois and Northern Iowa, Cherry liked the intensity his team showed despite coming up short.

“We need to show more of the intensity that we showed in those two games,” Cherry said. “We need to show that from the start of the game, all the way up until the end of it.

As far as strategies go, Cherry said his team will need to have strong possessions and keep control of the ball to wear their opponents down.

“It’s going to be really important for us to try to keep the ball,” Cherry said. “We need to make them chase the game. We need to stretch them and be all over the field.”

Cherry also made adjustments to his lineup for the upcoming contests. Some position changes were a result of injuries.

Also, Cherry wanted to improve and give his team the best fit possible.

In particular, senior midfielder Molly Hawkins was moved to give the team an additional spark, according to Cherry.

“She’s been performing all week,” Cherry said. “She’s been tucking the ball away and scoring goal after goal in practice.”

Cherry also mentioned freshman midfielder Brooke Munroe and freshman defender/midfielder Kate Olson for the production he expects them to add.

“I think these two freshman can come into the midfield and work for us,” Cherry said. “It’s looked good so far in practice.”

As of now, Indiana State is 1-3 and will play against a strong Butler team before their matchup with Eastern Sunday at 1 p.m. in Terre Haute, Ind.