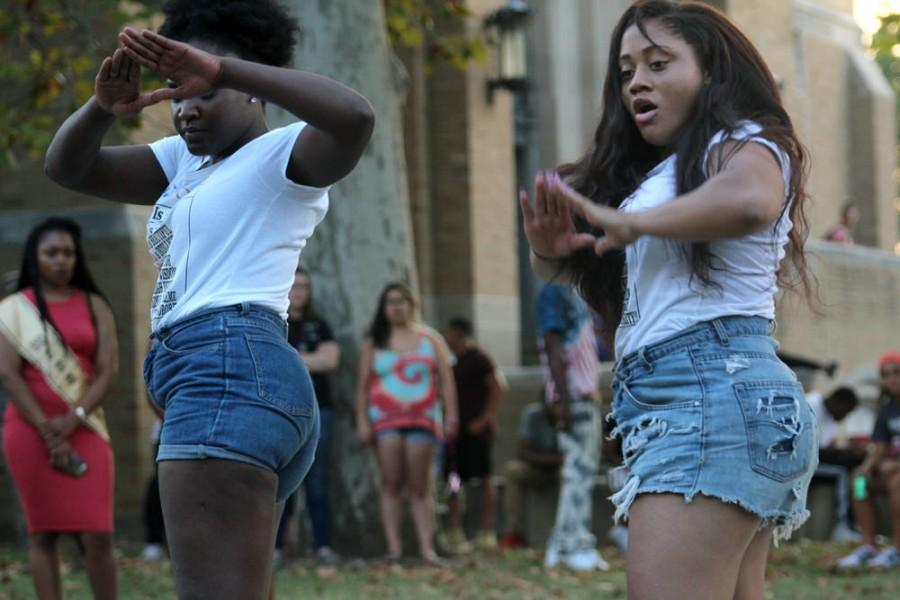 Ashley Howard, a senior communication studies major, and Kathryn McIntosh a senior kinesiology and sports studies major, holds up the Delta Sigma Theta hand sign during their performance with their sorority at the Meet the Greeks yardshow Thursday near the steps of the Dounda Fine Arts Center.

The sound of red, gold and black shoes pounding the pavement along with clapping hands, ricocheted through Eastern’s campus as members of the Divine Nine strolled Thursday evening.

Meet the Greeks is meant to showcase the different Greek organizations within the “Divine Nine,” and bring awareness to their roots.

Omega Psi Phi fraternity sported “Straight Outta Howard” shirts in reference to the Greek organizations being founded at Howard University. Along with the head shaking and hopping, Omega Psi Phi was the only fraternity to stroll with no music.

The members stuck to a traditional tactic, and played their signature song “Atomic Dog,” by George Clinton.

Hair flips and sassy chants followed the men of Omega Psi Phi, when Delta Sigma Theta sorority made way to the yard.

The women of Sigma Gamma Rho sorority paid tribute to Sandra Bland, who was also in the sorority. The sorority said they wanted a moment of silence to be dedicated to all who have lost their lives to social injustices.

The ladies of Zeta Phi Beta sorority came out in royal blue and white baseball jerseys and sang while strolling.  The sorority ended their stroll with their roll call, which all belonging to the sorority chanted.

The sounds of whistling and hopping came from the gentlemen of Alpha Phi Alpha fraternity.

The men’s attire consisted of gold and white baseball jerseys.

Ashley Howard, the National Pan-Hellenic Councils president, said she enjoyed having a chance to stroll with her fellow sorority members, and other Greeks as well.

“It brings a sense of Greek unity, and gives the community a chance to get out and be social,” Howard said.  “It gives the campus entertainment and gets people comfortable around Greeks because sometimes we aren’t seen as regular students, and we are.”

Darien Ghostone, the vice president of Alpha Phi Alpha, said events like Meet The Greeks brings exposure to the different Greeks on campus.

“It shows everyone who is new here what our Greeks are about,” Ghostone said. “With all the things going on campus we still need to show people we are humble.”

Paulette Horton, the Delta’s financial secretary, said the event brought non-Greeks and Greeks together and broke the line between the two.

Horton said Greeks strive to make students lose any tense feelings people might have around Greeks.

The men of crimson and crème, Kappa Alpha Psi fraternity, performed variations of their signature “shimmy.”  To the crowd’s surprise, the gentlemen pulled out their canes from the side of their cladded blue jean ensembles.

Hollers were heard from the crowd as the fraternity spun their canes and strolled.

The frat ended their performance with strolling in unison, hand to shoulder.

Each Greek left their mark with their unique strolls and traditional role calls. Role calls usually include quick background on each organization.

Allison Oates, a sophomore health administration major, said it is always a positive thing to see a group of dynamic African-American students on campus.

“We now know that we can do something constructive together on campus,” Oates said. “We see the Greeks who didn’t know each other create little families and be there for each other.”