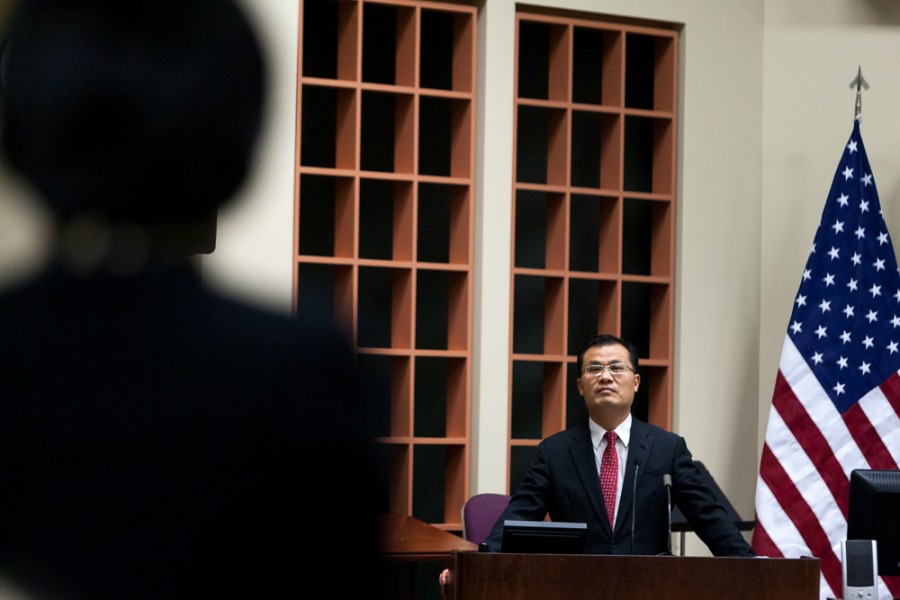 The Chinese Consul General in Chicago, Weiping Zhao, gave a lecture on relations between the United States and China Wednesday in Buzzard Auditorium.

The lecture was followed by a question and answer session between Zhao and the audience.

Zhao said many positive things were happening in the bilateral relations between China and the United States.

“It is not easy for people to find good stories on Chinese cooperation in the US media,” Zhao said. “On the contrary, the media always focus on the negative aspects of the relationship. People will not be able to develop a balanced view on Chinese relations if they rely on the media as their only source of information and don’t use their own judgment.”

Zhao said China’s economy will continue to grow at a relatively high speed which will provide a lasting driving force for further expansion and cooperation between the two countries.

“Recently, there has been too much pessimistic media coverage on China’s economy,” he said. “Most media report and commentaries have exaggerated the problems in the Chinese economy. Although China’s economic growth has been slowing down since 2012, the slowdown itself has been slow and manageable.”

For the first half of this year, China has achieved a gross rate of seven percent.

Zhao said this is well in line with the government’s target for this year’s economic growth.

He said the employment situation is good and the inflation rate is low.

“The Chinese Government has full confidence in achieving the set of goals for this year’s economic growth, because there are still many policy instruments at their disposal, and the government still has strong financial capability,” Zhao said. “One thing’s for sure. There will be a bottom line for the slowdown of China’s economic growth. The Chinese government is determined to stop the economy from running out of control.”

Although some in the media have stated that China is devaluing its currency to save the economy, Zhao said China does not see the purpose of devaluing it currency.

“China’s economy is still safe, and there is no need to save it in the first place,” he said.

A lot of the topics Zhao touched upon were about clearing up some ideas about Chinese and US relations that the media got wrong.

He said China is firmly committed to peaceful development in the bilateral relationship with the United States.

China has suffered from military invasions, which is why Zhao said they understand the value of peace.

History Professor Jinhee Lee said there were students interested in learning about the Chinese culture.

“We understand that there’s so much potential for us to have a greater and deeper relationship with China, but as we speak right now the Chinese Celebration event at the end of World War 2 is demonstrating the military strength, so how should we make sense of that direction in an event like that?” Lee asked.

Zhao said Celebration was not to celebrate military strength.

“We believe it is very significant for the whole world to remember the past history,” he said.

He said the point was to give learning lessons from the past.
“China lost more than thirty million lives during the war, because of the invasion of the Japanese nation. So we cannot forget the history,” he said. “That should be plenty of reason for China to commemorate the 17th century.”

Rinefort is writing on China, sparking several questions for Zhao.

“The Chinese government indicated there were 68,000 work deaths in China last year,” he said. “The United Nations and the World Health Organization indicated that number was twice as high. So what ever happened to the other 70,000 Chinese who were killed in work injuries last year?”

Zhao replied saying he did not have any statistics to provide, and the statistic was a surprise to him as well.

“I want to say that as a developing country, especially with such a high gross rate, the work safety is indeed a problem in China and we need to reorganize our efforts to address their problem,” Zhao said.

Bailey Young, a history professor, asked Zhao to comment on the situation going on in Tibet,

“Tibet is one example of the Buddhist heritage but Buddhism is a very large part of Chinese history, and I wonder if China today is embracing that heritage,” Young said.

Zhao said to recognize that Tibet is part of China’s territory.

“That is also the position of the US government, and the majority of countries in the world,” he said. “In Tibet, you will find, there is no such religious persecution or destruction of heritage. Maybe there’s some individual cases, but there is no plan for the government to destroy their religion. The Tibetan language is also the official language there.”

At a press conference, Zhao talked spoke about the details of his job and the establishment of a sister city relationship for Urbana and the City of Guangzhou.

As a consulate in Chicago, Zhao covers nine states mainly in the Midwest, such as Illinois, Minnesota, and Missouri.

“This is my first time in Charleston, and I am very glad to be here at the invitation of President Glassman,” he said. “But I’ve been to this area several times before.”

As a diplomat, Zhao travels a lot.

“Our purpose is to keep in touch with various communities in our consulate area, and to provide our service to them in their engagement with China,” he said.

His purpose for visiting Eastern is to get to know what kind of plans with China the university has, and what assistance they need from the consulate as well as exchanging ideas with faculty and students.

The City of Urbana established a sister city relationship with the Guangzhou province of China several years ago.

“There are hundreds of American cities that have established sister city relationships with Chinese cities,” he said. “ We do believe it’s a very good mechanism for the cities in our respective countries to conduct the exchange and cooperation in various areas.”

“So far as I know, the sister city relationship between Guangzhou and Urbana is going very well,” he said.

Zhao said the mayor of Urbana led a delegation to Guangzhou, and had a good visit there when she promoted Urbana to China.

“She also think there are some aspects of the management there they can also learn from, so it’s a very mutually beneficial relationship,” Zhao said.

He said because the University of Illinois was based in Urbana, he did believe there is much room to corroborate.

The delegation from Guangzhou will also visit Eastern.