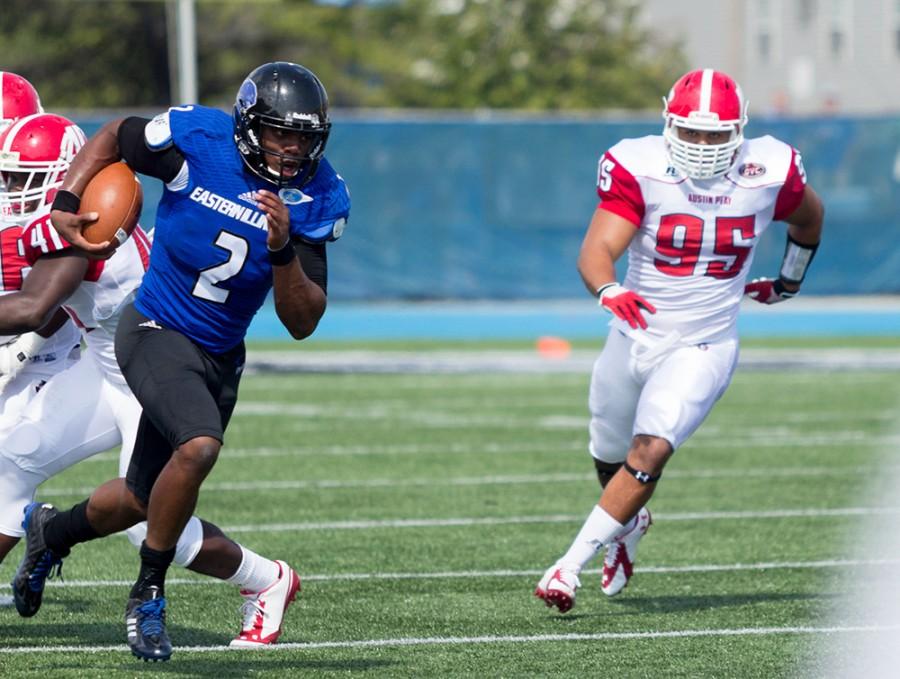 Junior quarterback Jalen Whitlow runs with the ball down field against Austin Peay on Sept. 21, 2014 at O'Brien Field. Whitlow set an Eastern record, with 137 rushing yards by a quarterback, as the Panthers won 63-7.

The 2015 college football season begins this week as the Eastern football team will open its season Thursday night for the second straight year when they will travel to face in- state foe Western Illinois.

Kickoff is scheduled for 6 p.m.

The Panthers have been practicing since last week after breaking from fall camp on Saturday, Aug. 22. Coach Kim Dameron said that practices have been good this week, and that the Panthers are in the process of making final preparations for the opener.

“You can’t get tired of preparing. You’ve just got to keep preparing, even though it’s been a long time and reps, and all that stuff,” Dameron said. “Hopefully we’ll be to where we’re extremely prepared going into the game.”

One player who is excited about the upcoming season is redshirt junior running back Devin Church. Church transferred to Eastern after playing at University of Illinois last fall. Church has become a part of a Panther backfield that will see various running backs get playing time this season.

“We’re loaded in the backfield. Got a bunch of talent and a good coach,” Church said. “We’re all going to be playing, so it’s going to be real nice this season.”

Redshirt senior Shepard Little, junior Korliss Marshall and graduate student Jerron Seymour are also to be part of Eastern’s rushing attack this year, which Dameron said would be a running back by committee.

The Panthers were second in the conference and 11th in the nation in rushing offense last season.

“I’m feeling real good, confident,” Church said. “Just ready to get going with the season and win some games.”

Another Panthers player eager to win games this season is sophomore kicker Nick Bruno. Bruno finished last season going 14-of-16 in field goals and led the team in scoring with 86 points. He was named to the All-Ohio Valley Conference Newcomer team and a first team freshman All-American.

“I just want to see the team win the conference this year. Get deep into the playoffs and maybe compete for the national championship,” Bruno said. “Hopefully we can just win that’s all I’m worried about.”

Bruno will have a different holder this season with the graduation of Adam Drake but he said that the Panthers are squared away at that position.

“I’m just trying to do the same thing that I did last year, and put it through the uprights,” Bruno said.

Dameron is also focused on getting his team healthy for the opener as the final preparations are made.

“Health issues are always an issue because you can lose a critical player and you’re a different team than you were,” Dameron said. “We need to stay focused on the process every day, with going out and getting better every day.”