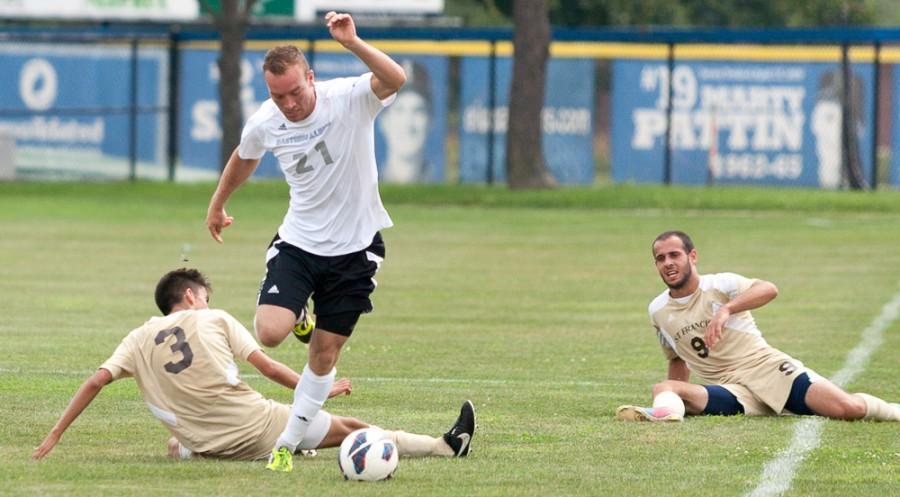 The Eastern men’s soccer team earned a split in its two games over the weekend after defeating Lipscomb 3-1 Sunday and losing 8-0 Friday to nationally-ranked Xavier.

Trailing 1-0 early in the first half against Lipscomb, sophomore Tyler Oliver tied the game at the 48:45 mark in the second half.

Justin Oliver then gave Eastern a 2-1 lead about two minutes later for his first goal of the season.

Sophomore Dominic Recca put in a cross from Tyler Oliver at the 64:08 mark of the second half to give Eastern a 3-1 lead, which they would hold for the rest of the game.

19 different players saw the field for Eastern as new head coach Kiki Lara was playing a variety of line-ups in his first game. Nine of those 19 were seeing their first action at the collegiate level.

Sophomore goalkeeper Mike Novotny got the start in net for Eastern after starting in 15 games last season. He made seven saves in the loss. Lara said that his team didn’t come into the game prepared enough physically.

Lara also said that the team relearned Friday that to play at a top 25 level, you have to play at a high physical level.

He also said that the team is a little naïve at the moment and they still have a lot to learn when playing a team like Xavier.

Xavier started off its scoring in the 15th minute when Senior Alex Ridsdale stole the ball from an Eastern defender, which resulted in a one on one with goalkeeper Mike Novotny. Ridsdale had the lone goal of the first half.

Sophomore Matt Vasquenza started off the scoring in the second half with two goals. His first came in the 51st minute from eight yards out on the left side and was assisted by Kyle Martin.

His second of the game came just five minutes later when he scored from 20 yards out on the right side of the box. Josh Grant assisted that goal.

The next two goals came a minute apart in the 66th and 67th minutes. Red-shirt junior Majed Osman scored from a centered pass by teammate sophomore Eric McWoods and he later scored the next goal after he stole the ball from a Eastern player and finished from five yards out.

Xavier rounded out the scoring in the 71st, 73rd and 75th minutes. Senior Calum Latham scored his first goal of the year off a rebound in the 71st minute.  Red-shirt freshman Kaleb Bayse scored the final two goals, the first was passed to him in the center of the box by Osman and put into the back of the net.

The second was scored in off a rebound from a previously blocked shot. Eastern was outshot by Xavier 20-2 and did not have a shot on goal. JuniorDavis Wegmann and freshman Julian Montoya were the players who had shots from Eastern.