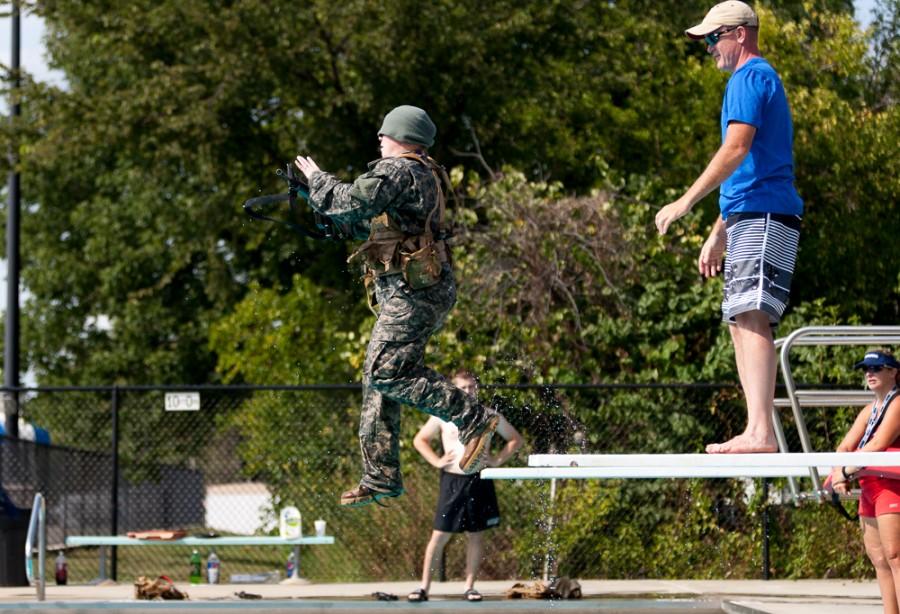 Junior pre-nursing major Angela Robison is pushed off the diving board during combat water training on Thursday at the Charleston Rotary Pool.

Members of the ROTC swam across the Charleston Rotary Pool in full uniform with a plastic rifle in their arms, for water training Thursday afternoon.

Their uniforms were dripping with water upon exiting the pool with their boots flooded.

ROTC members went through five events meant to train them for situations where they have to swim while in combat.

After that, they were taken to the diving board where an instructor pushed them off while they wore a hat on their head that covered their eyes.

Dylan Doughty, a senior business major, said the point of the blindfolds is so they are disoriented when they hit the water.

“You’re supposed to keep your calm, remove your blindfold, and swim back to the side you came from,” Doughty said.

The other event was on the far side of the pool.

Leaders put the equipment on the ROTC members, then they were pushed into the pool.

“As you fall in backwards, you’re supposed to get all the equipment off you while you’re underwater just so you get used to maneuvering all that gear because it gets heavy,” Doughty said.

The last two events are a 10-minute swim and five minutes treading water.

During the swim, students cheered as the instructor announced there was only one minute left.

Biyok said this was because they were not wearing their uniforms, and because she is from the Philippines, where she swam a lot.

Not everyone in that attempted the event was a strong swimmer, but part of water training was identifying the weaker swimmers.

“We have swimming lessons throughout the semester,” Doughty said.

K. Saldanas, a senior sociology major, was not a swimmer when first starting water training.

“I failed everything my freshman year, then sophomore year I started training with Captain Alix to improve, but by my junior year I passed everything,” Saldanas said. “I think training is good for everyone to face their fears, because I’m still scared of swimming.”

Abby Robison, a junior pre-nursing major, has had three previous experiences with water training for the ROTC.

“I’m a relatively decent swimmer, so I enjoy this lab a lot,” she said. “Some people are scared, but it’s kind of normal, like, go put your clothes on, you’re going for a swim. When it’s wet it’s actually pretty heavy, like the pockets in the uniforms hold the water. There’s so many pockets.”

She said she was somewhat intimidated when she did it for the first time.

“It was a little bit harder than I thought because you got the water weight and you’re dragging stuff with you,” Robison said. “It’s been the same pretty much every year. I try to encourage the kids who haven’t done it before.”

It was the first time for Dexter Kimbrough, a freshman pre-med major, but he said he was not that nervous.

“Not until I touch that water,” Kimbrough said.

“I’m still breathing, I’m alive,” James Holt, a transfer student studying communications, yelled as he came out of the pool.

Holt has served in the military before. He was four years active and spent a couple of years in the reserves.

Blake Miller, a senior sociology major, has been water training for four years and was helping the new members out.

“Most can do it, it’s a lot different because people think they can swim, then it changes, they get all this stuff on,” he said. “I’ve been out here all day I’ve been having so much fun.”

Miller said the ROTC was able to use the water slide at the pool and diving boards in their spare time.

“They were so much fun,” Miller said. “Work hard, play hard.”