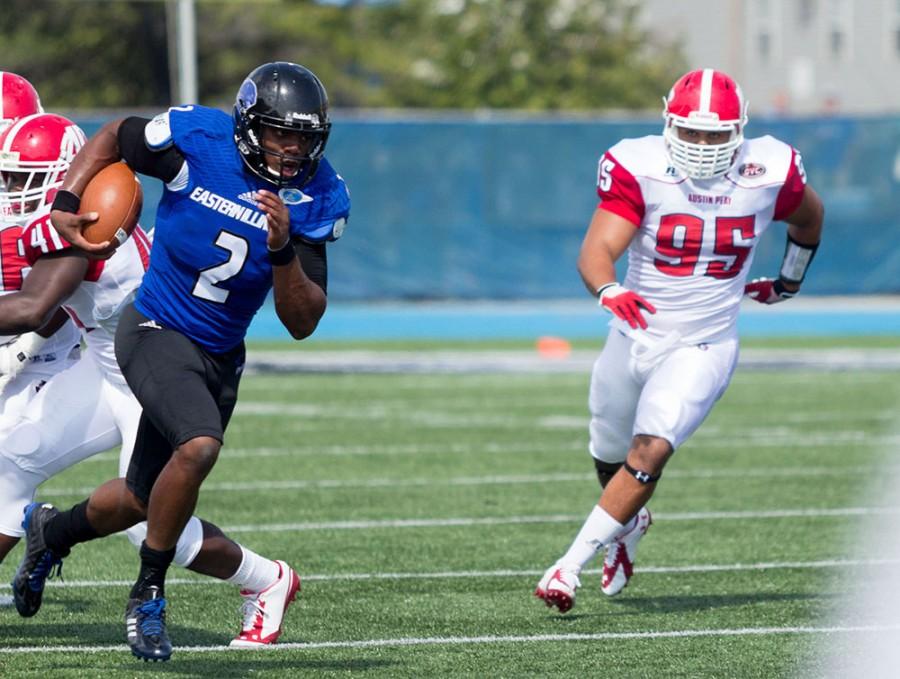 Junior quarterback Jalen Whitlow runs with the ball down field against Austin Peay on Sept. 2, 2014 at O'Brien Field. Whitlow set an Eastern record, with 137 rushing yards by a quarterback, as the Panthers won 63-7.

Eastern starting quarterback Jalen Whitlow is having a different kind of preseason this fall than he did in 2014.

Despite earning the job and being a returning starter this year, Whitlow knows the Panthers still need to work hard, something they’ve been doing all offseason.

“Every facet of our game we’ve been focusing on, including offensive line, running backs, receivers,” Whitlow said. “Just try to keep working at everything and getting ready.”

Whitlow, who has been mentioned on several watch lists, has now become the leader of a Panthers offense that finished in the nation’s top 20 in total offense. New faces at wide receiver and running back have been a point of emphasis in the offseason, with coach Kim Dameron saying it will take time, which isn’t necessarily a bad thing.

“It’s like anything, even with the NFL teams. They have some turnover and it takes a while,” Dameron said. “I’m really pleased with their progress and coach (Greg) Stevens is doing a fantastic job with them.”

Dameron calls his offense a quarterback-driven offense, which means that if the quarterback struggles during the game, then the offense will not play well.

The quarterback must be able to make decisions at the line and after the snap. However Dameron has faith in his quarterback Whitlow.

“I feel very confident in Jalen. He works at it, and I trust him as much as I trust everybody,” Dameron said. “I feel like he’s going to come out and have a fantastic year.”

Whitlow said that the Panthers have been focusing on all offensive positions in the preseason. The offensive line returns a couple of starters in preseason all-Ohio Valley Conference right tackle Evan Kanz and left tackle Jimmy Lowery.

Those two will be part of the Eastern offensive line, which will be protecting Whitlow, beginning on Thursday, September 3 at Western Illinois.

At running back First Team All-OVC running back Shepard Little returns, after a season in which he ran for 797 yards, despite missing some games due to an injury. Little, a redshirt senior, will be joined in the backfield by a pair of Football Bowl Subdivision transfers.

Devin Church and Korliss Marshall have arrived at Eastern, after stints with Illinois and Arkansas, respectively. Dameron said he feels confident in the running game and believes it is what the Panthers will be able to do best.

“If we can run, then we’ll be able to throw it,” Dameron said. “If we can’t run it, then we’re going to have problems anyway.”

Dameron said that the Panthers will be a running back by committee team, using various backs throughout the season. He is looking for all three to contribute to this year’s season.

Another starter from last year, expected to contribute is All-American sophomore kicker Nick Bruno. Bruno was 14-of-16 in field goals last year, including a career long 45 yard field goal in a win at Southeast Missouri last year. He also served as the punter, and he will not be doing those duties this season.

A new group of receivers will be at Whitlow’s disposal this year, after the graduation of former All-American Adam Drake. Red-shirt junior Anthony Taylor, red-shirt freshman Tray Mitchell and red-shirt senior Trey Pendergrass are expected to see some playing time this year.

“I’ve been really pleased with their progress,” Dameron said. “I think we have a chance to have some guys, who are explosive on the outside, who we haven’t had before.”