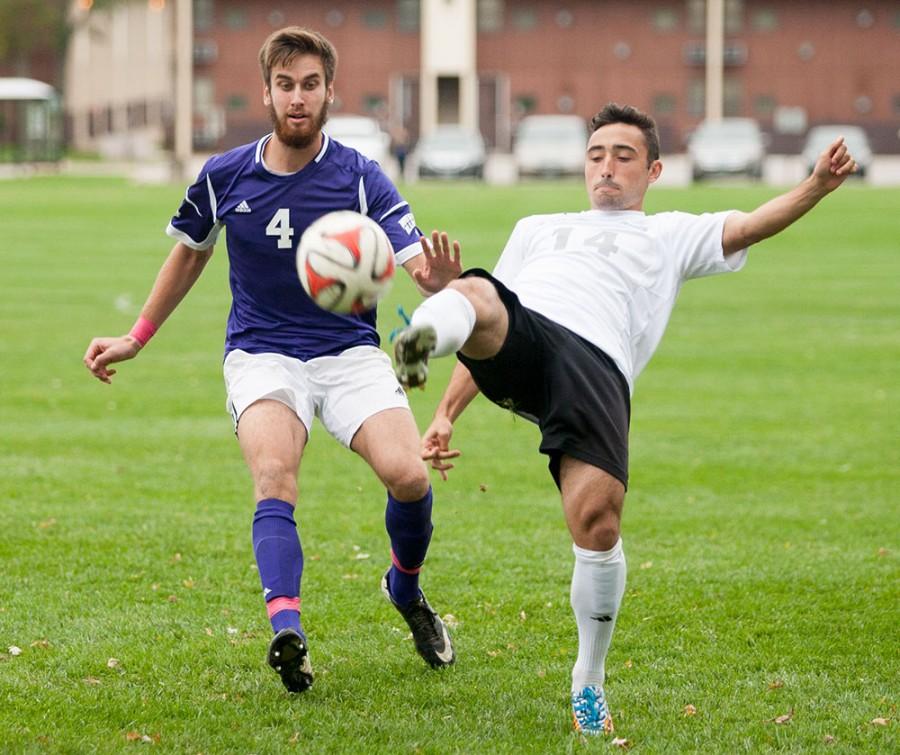 Former Eastern player Will Butler clears the ball up the pitch during a match against Western Illinois on Nov. 18, 2014 at the Eastern practice field. The Panthers lost to the Leathernecks 1-0.

With a third different head coach in as many years, the Eastern men’s soccer is set to kick off it’s season this Friday at Xavier. Eastern finished last season with a 3-13-1 record and finished last in the Summit League.

Eastern has an all-time record of 416-357-70 with 12 postseason appearances and five conference titles. They have been picked to finish seventh in the 2015 Summit League Preseason Coaches Poll.

Eastern also has not won a game away from home since 2012. New Eastern coach Kiki Lara was hired in March as the ninth head coach in history and is coming off of a successful stint as an assistant coach at the University of Dayton for five years.

Lara talked about his team being right culturally as a thing he has been stressing to them.

“The main thing for me is that you have to be right culturally,” he said. “People that are members of the program have to be committed to being a team member first above all. Being able to sacrifice a little bit of himself to be apart of a programs ideal goals.”

A lot of new faces will be on this team as they will have ten freshmen and three transfers, but they return four seniors who are Conor Bartuch, Tony Meza, Nick Smith and Kyle Callender.

Seniors’ Callender and Smith were the ones who stood out to coach Lara as the leaders at this point.

“Kyle Callender is someone who stands out as most prepared, but I would say that Kyle Callender and Nick Smith have started the season as two guys that will lead the team,” he said. “What we will do is we will add to those two guys, and we’ll strengthen the leadership group. I like leadership groups. I don’t like to put all the responsibility on one guy.”

With many newcomers who still have a lot to improve, Lara is going to look at who will grow quicker than the others when expanding his leadership group.

“Based on the preseason, we’ll start to look at one to four guys to take certain roles in this first part of nonconference and as people grow when they get the hang of it,” he said. “Some people will grow quicker and understand the culture as it relates to the game and from there we will identify more of those leadership roles.”

There is still a competition at goal, but they will be returning sophomore Mike Novotny and red-shirt junior Ben Feltes. Novotny played in 15 games last season and Feltes appeared in three.

Eastern won both of its exhibition games which were held at home on August 16and 18.

They beat Cincinnati 2-1 and Saint Xavier 4-1 and both games were tied at one point in the game. Lara liked the fight that he saw in his team.

“I thought the team showed resiliency at one point we were 1-1 with Cincinnati and we found a way to be resilient enough to get another goal and keep it and work toward the result,” he said. “If we were emphasizing culture I was happy with that. I was happy that guys maintained their work ethic throughout the full length of the game.”

Eastern is set to take on Xavier on the road in Cincinnatti this Friday night at 8 p.m.