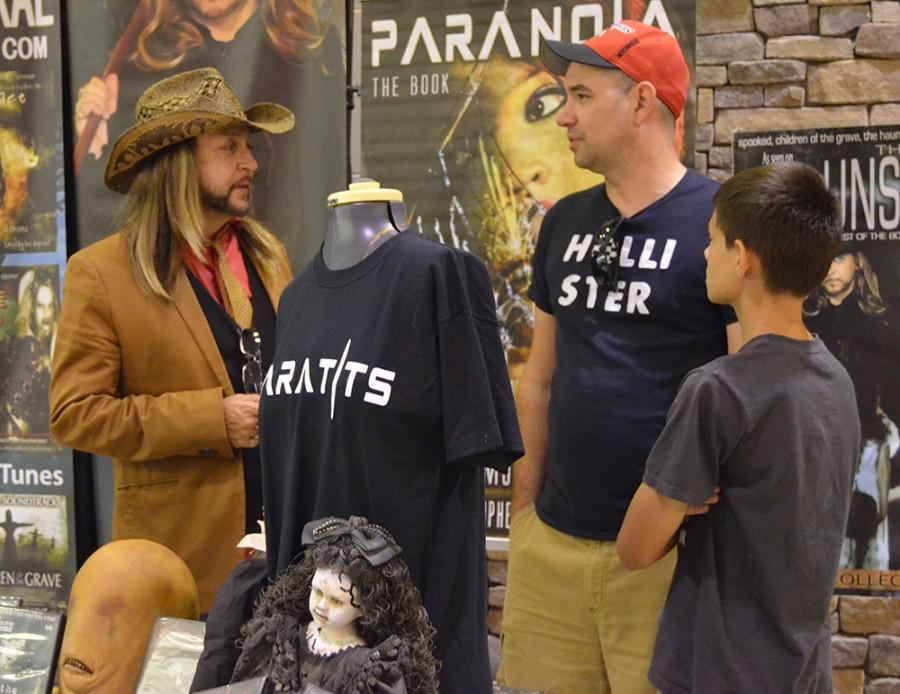 Patrons of Charleston and Mattoon area enjoy the annual Central Illinois Paracon or Cil-Con at the Cross County Mall Saturday Augus 23. Events being held range from Psychic Mediums, Healing Gypsies, and even the original Mystery Machine from Scooby Do. Merchandise being sold there extent from paranormal to TV favorites and even anime. Pictured: Christopher Saint Booth, a paranormal expert, talk to Garrett Pearce, 40, the father of Gentry Pearce, 13, both Mattoon residents. Gentry Pearce appeared in one of Booth's films.

The Illinois Metaphysical and Paranormal Society hosted the Central Illinois Paracon convention at the Cross County Mall in Mattoon Friday and Saturday.

The Illinois Metaphysical and Paranormal Society, also known as IMPS, hosted this convention in smaller venues in previous years.

This year’s convention was hosted at the Mattoon shopping center because it allowed more space for vendors to come and attract more people to the convention.

Becky Guymon, founder and event coordinator for IMPS, said that previous years have been limited to paranormal and horror vendors, but decided to expand this year.

“We decided to add gaming and anime, because that’s what me and my family liked,” Guymon said.

Guymon said the Mattoon Tourism Board and the Charleston Department of Tourism gave tourism grants, which helped keep the event free for those who attended.

Guymon said that an estimated 250 people went through the convention area Friday, and hoped that close to 600 would go through by the conclusion Saturday night.

Different vendor tables were set up displaying games and comic books, while guests had their own tables to talk to those who attended the convention.

The Bama Boys from Deep South Paranormal were one of the guests at the convention.

Benny Reed and Jonathan Hodges, also known as the Bama Boys, have been investigating paranormal places before they were on the show Deep South Paranormal.

The Bama Boys go to different conventions during the fall, and said their favorite part is meeting people at the conventions.

Jamie Stafford, a Charleston resident and tarot card reader, was another guest in attendance. She had a table set up where she gave readings.

Stafford said this is her first convention that she has attended as a guest and gave readings at.

“I try to keep readings as affordable as possible because I think my gift is meant to be shared,” Stafford said.