Wolinski settling in nicely with Panthers 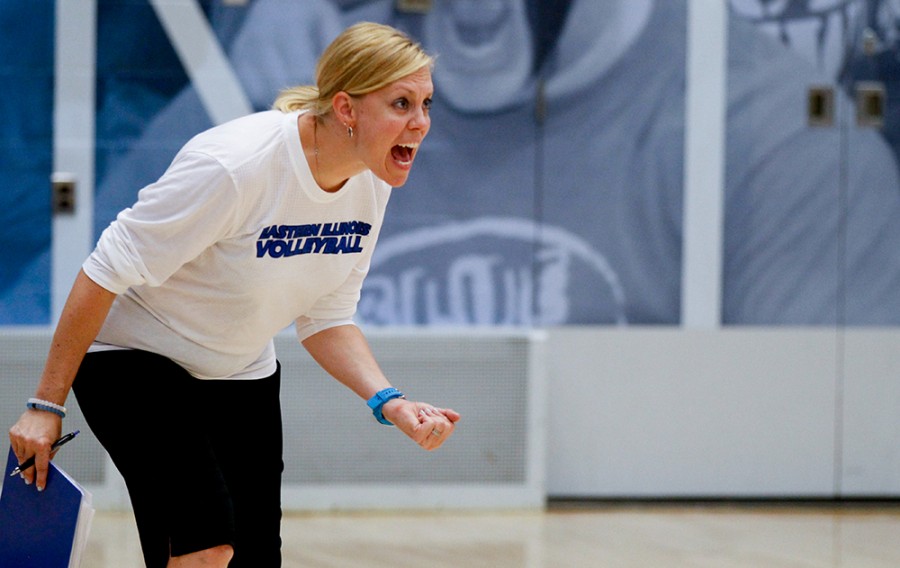 Samantha Wolinski is heading into her first year as the coach of the Eastern volleyball team.

Wolinski spent the past two seasons as an assistant coach at Mississippi State but has had no problem settling in at Eastern since being hired in March of 2015.

“I started back at the end of March, so I had the spring to transition with the returners,” Wolinski said. “I feel like I’m in the flow of everything.”

After spending the past two years being an assistant, Wolinski said she is excited to be head coach again.

“It’s exciting to have this opportunity here at EIU,” she said. “This program is not a rebuild. The previous staff did a good job bringing in quality players.”

She said that her job is to just fine-tune everything they are doing and extending their range.

The players also have to adjust to having a new coach, especially the seniors who have spent the last three years playing under former coach Kate Price.

“It’s a little hard only because our past coach is the one who recruited me,” senior Kayla Nesbitt said. “Sam (Wolinski) is doing a good job, she’s made the transition easier.”

Nesbitt said her team has done team building activities to help with getting used to having her as a new coach, and she said that it has helped.

“She has a lot of energy,” Nesbitt said. “She came in right off the bat wanting to do a lot.”

Wolinski has not had to make the transition alone as she has had help from other people on campus.

Eastern assistant coach Peter Green worked at Mississippi State with Wolinski and is also starting his first year at Eastern.

“Peter (Green) our assistant, he and I worked together over the last year so we know each other really well,” Wolinski said.

Even though this is her first year as coach of the Panthers, Wolinski said there has not really been anything too hard about it.

She came in knowing to make things easier she had to prioritize what needed to get done.

“The first thing was spring season and getting to know our returners and building relationships with them,” Wolinski said. “Two, was the kids that were committed for this fall, reaching out to them and building a relationship with them, and the next thing was we needed to get the ball rolling with recruiting.”

Wolinski has already nearly finished with the class of 2016, and she has even received a verbal commit for 2017.

She said she feels pretty good about where they are at with that process.

Wolinski wants to come in and set a foundation and build a culture around Eastern volleyball.

She wants herself and team to know what they have to do to be on the bus and know that everything is a day-by-day process.

Wolinski said the biggest team goal is to win a lot of matches and be able to host the Ohio Valley Conference tournament at the end of the year, but they all know that it will not be handed to them.

“To get to that stage, there is a lot happening behind the scenes,” Wolinski said.

Everyone involved in a team brings something special and Wolinski does too.

She also hopes to build a relationship with the community and all of Eastern.

Wolinski’s first game as the Panthers’ coach will be Friday when the team takes on Illinois-Chicago in Fort Wayne, Ind.