Quakin’ in the Quad brings carnival atmosphere to campus 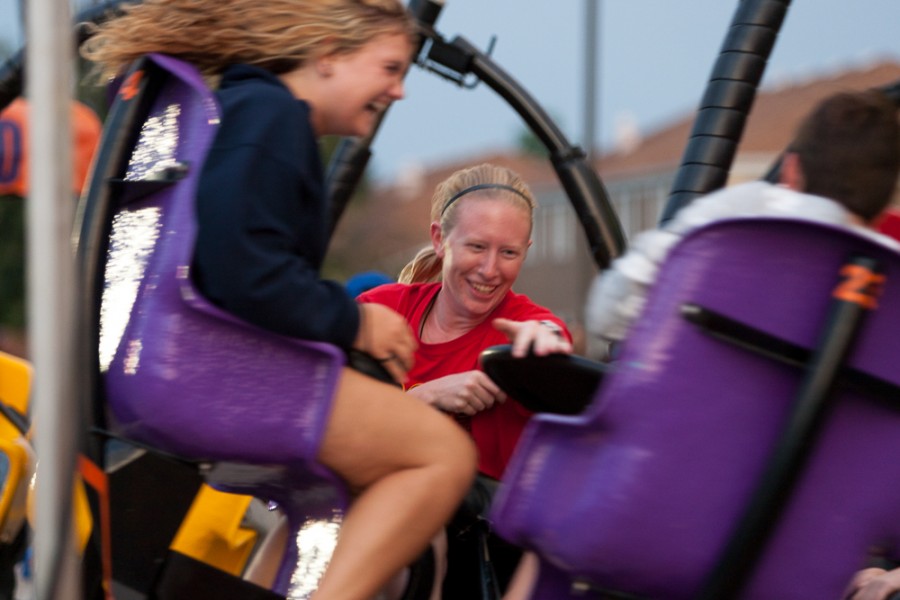 Senior kinesiology and sports studies major Megan Langenhorst rides the Tornado during Quakin' in the Quad held in the parking lot at the corner of Ninth Street and Roosevelt Avenue on Saturday. Langenhorst wanted to hang out and catch up with her friends after the summer.

Music played, and people were screaming as they spun around on the rides that were free for those in attendance. They walked around, eating chicken kebabs and popcorn and talking to their friends.

Anna Bunker, a junior psychology major, said she was a little scared to get on the rides, but her friends made her get on one.

“Who doesn’t have fun at a fair?” Bunker said. “There’s lots of rides, and it’s free. You can’t beat that.”

Ambria Burham, a freshman psychology major, said she was not expecting to attend a carnival-like event when she came to Eastern.

“This is actually really fun,” she said. “There’s not really a big difference from the fair in my hometown.”

Taylor Opsahl, a senior biology major, used the event as a way to advertise Greek Life.

“I’ve been walking around, handing out flyers,” she said. “A lot of people have been like, yeah, I’ll look into it.”

Opsahl said she was not always able to go to the fair when it came to her hometown because she was already at school when it happened, so she liked having a carnival-like event at Eastern.

Eastern Students were not the only ones who came to the carnival.

Marschelle McCoy, the office manager from the biology department, came with six-year-old Jackson Stewart, who she was babysitting for a friend.

Stewart, who was waiting in line for food, kept telling McCoy that he wanted to go on the giant slide.

Gary Kepley, the owner of Kep’s Cooking, said they handed out twelve hundred meals at the carnival.

Kep’s Cooking often partners with Eastern for events such as Homecoming and Parent’s Weekend.

“The students treat us great, I have never had a problem here,” Kepley said. “That’s cool, you don’t get that everywhere.

Aaliyah Stephen, the special events coordinator for University Board, said they wanted to do something different for Quakin in the Quad this year.

“There has been such great feedback,” Stephen said. “It’s making people take pride in the fact that they go to EIU.”

Jessica Jones, the vice president, said people came up to members of UB and complimented them about the festivities.

“They said they liked the whole carnival thing,” Jones said. “They said it didn’t even feel like Charleston. It’s all been very successful.”

Vice President of Student Affairs Dan Nadler said although he did not plan on going on any rides, he still liked seeing everyone having a good time.

“It helps students get to know each other,” Nadler said. “Students need to feel like this is their second home.”

President David Glassman said the last three days of Pantherfest had been some of his favorite three days on campus since he had been able to interact with students.

“These types of events build affinity with the university, as well as creating friendships,” Glassman said. “Having friends, and a support system is the key for student retention.”

Shifa Shamim, a senior accounting major, said she has been going to opening weekend events every year since she was a freshman.

“This one is very different.” Shamim said. “Aside from the food, I’ve never seen something like this at Eastern.”

Shamim spent the night going on rides catching up with friends she had not seen for three months.

“I’ve talked to a lot of people here, some classmates,”she said. “I love it. It’s fun. It’s thrilling.”