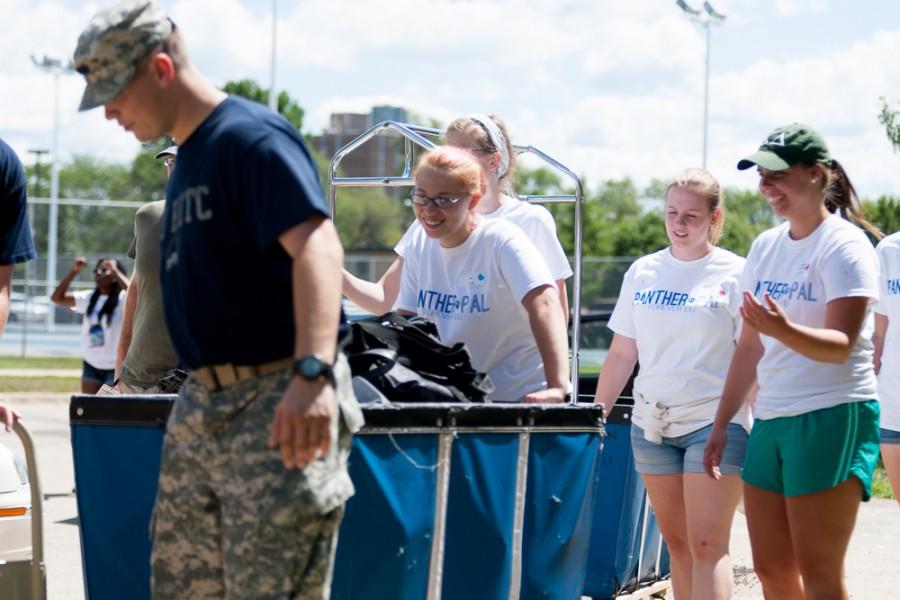 Prowl staff members as well as members of Eastern's ROTC help move in students to Thomas Hall on Thursday.

For Chantieria Cook, making the choice to come to Eastern was not much of a hard decision.

Cook, who is a freshman pursuing a pre-medical degree, was one of the new students moving in, Thursday said the scenery and atmosphere of the campus is what aided in her choice of picking the university in March.

Patrick Cook, her father, drove the two-hour trip from Bourbonnais, Ill. with his daughter, only stopped once for gas, which was $2.67 and for food.

“We like the small campus feel and the faculties,” said Patrick Cook.

Patrick Cook said the fact that Eastern is so close to home is also an added bonus so he can see his daughter.

The father was also impressed with how well the university was handling move-in day, saying how organized and stress free their experience was.

Amid the cart pushing and rushing parents, members of the university’s Army ROTC program also assisted with move-in day.

Zack White, a recruit operations officer, said members of the program have been participating in move-in day for years and it is a great way to help students and get their name out.

“Pretty much whatever they want us to do, we’re here helping,” said White.

Charlie has been moving his son, Alex Vokoun to campus each year making somewhat of a father-son event.

Charlie said Alex is studying theatre arts after switching his major from music because of his enjoyment of the department.

Some of his choice’s for college were Northeastern Illinois University and Indiana University, but ultimately picked Eastern.

Coming from Elk Grove Village, a suburb of Chicago, Charlie Vokoun said he saw gas prices as high as $3.45.

For Catherine Ward, a freshman history major, said she chose Eastern because it had her program of interest.

Ward’s mother, Katie Wood, said the family was from Chatham, Ill. had a little over an hour trip with gas prices being $2.79.

Ward said another factor in her choice going to the university was because she, like many, wanted the “college” experience.