Some employees to receive unpaid furlough 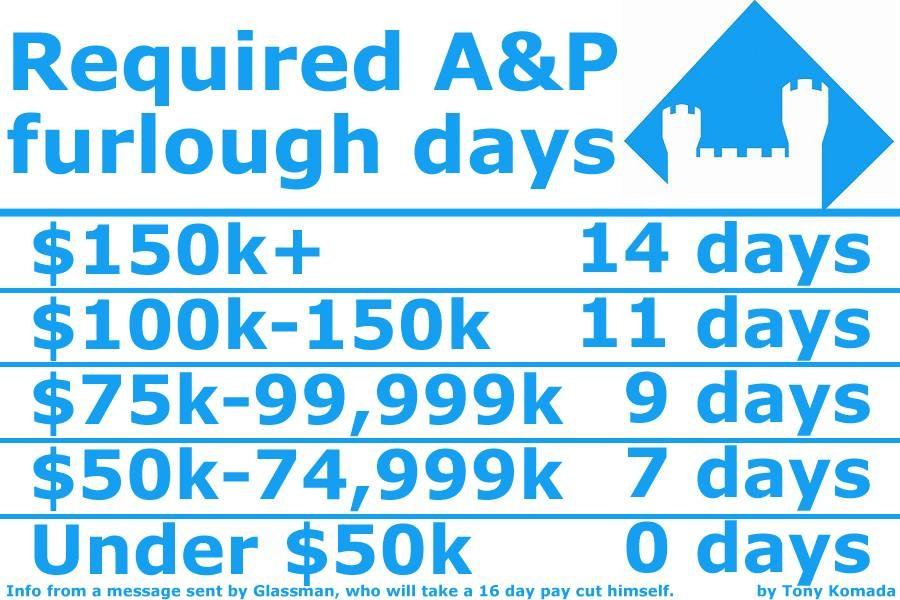 Eastern will be implementing unpaid furlough days for Administrative and Professional employees as part of a university-wide expense-cutting initiative to keep the budget balanced in fiscal year 2016.

Paul McCann, the interim vice president for business affairs, said the university would save $700,000 or more by implementing the furloughs, and about 222 employees fall in this category.

In a letter President David Glassman sent to the university community Wednesday morning, he said the furlough requirement would be graduated based on salary level. 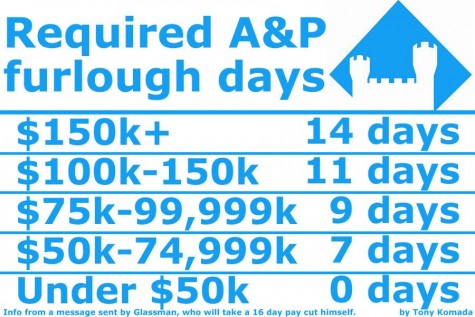 According to university policy, employees cannot be given more than 24 furlough days in any 12-month period, and they are not required to work during those days.

Glassman states in his letter that he will take a pay cut equivalent to 16 unpaid furlough days but continue to work so university business would not be interrupted, and others who wish to work despite the pay cut have that option as well.

He also states in the letter that he would give back an equal percentage of his housing allowance to pay for student scholarships.

Glassman said in a later email that the amount would be approximately $2,000, which he is considering dividing into four $500 scholarships for study abroad.

McCann said because layoffs are not immediate and require going through the civil service process, implementing furloughs buys the university some time.

“Furloughs are not necessarily something that is sustainable,” he said. “It’s a one-time thing, and it gives us a little bit of leeway when it comes down to the layoffs.”

The Board of Trustees approved a fiscal year 2016 budget in June of $171,804,100, though expenditures could change depending on how much money the state appropriates to the university.

Eastern’s budget anticipates an 11.7 percent decrease in personnel services, down from about $107 million to $94.5 million.

This amounts in a difference of about $12.5 million in personnel expenses.

“We put that into the budget because we were trying to balance the budget, and that’s all it was — it was an exercise in balancing the budget,” McCann said. “Now what we’re trying to do is go back and make actual expenditures agree with these kind of numbers.”

Glassman also announced in a statement Monday that 26 faculty members would be laid off, three would be reduced to half time and 10 additional positions would not be filled.

He said in an email that the only other individuals who have been notified of layoffs so far were three of the university’s electricians, and he does not yet know the total number that will be needed.

“It is not possible to estimate the total number of employees that may be laid off until we know the extent of our state appropriation,” Glassman said.

He also indicated in his letter that he would continue to update the campus community on developing decisions involving the university’s budget adjustment.

“Although critically necessary, the actions the university is undertaking to adjust our budget are immensely difficult and emotional and will impact us all in the Eastern community,” he said. “No one wishes to be laid off, nor see a colleague laid off. During this time, it is more important than ever that we remember to treat each other with respect and compassion.”

McCann said he does not yet know the estimated cost savings from the announced faculty layoffs, though the average salary for each is $50,000 per year.

“The issue is that it’s a very difficult thing for us to do,” McCann said. “And we’re trying to be as understanding and as quick about making the decision as we possibly can, but it is taking time.”