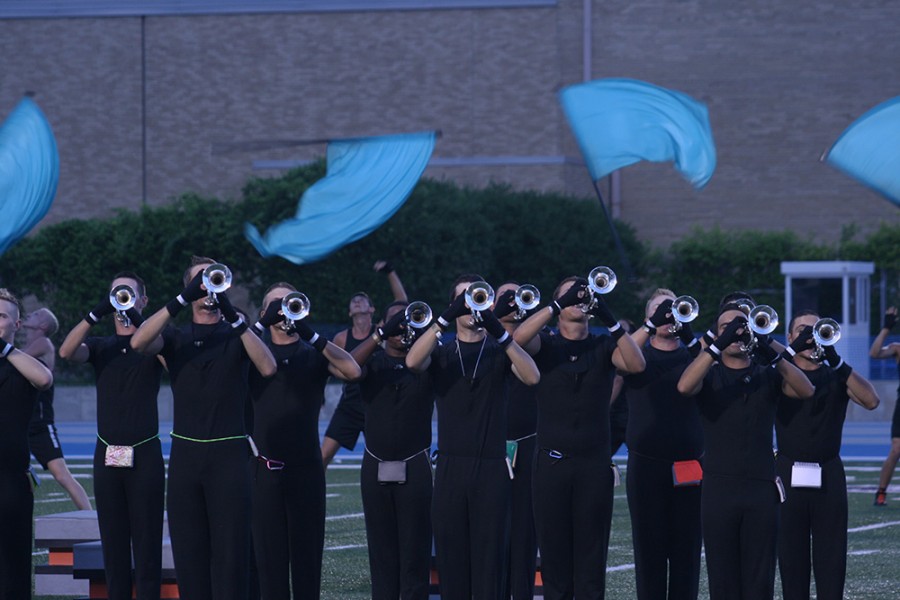 The Cavaliers Drum & Bugle Corps perform during a rehearsal Saturday at O’Brien Field.

After months of auditions, training and rehearsals, the Cavaliers Drum & Bugle Corps from Rosemont gave a crowd at O’Brien Field a sneak peek of its upcoming tour with an annual season kickoff and fan appreciate night Saturday.

The Cavaliers used Eastern as a place to practice while getting ready for its first official 2015 “GAME ON” field show Wednesday in Indianapolis.

Band members rehearsed for the audience before putting on their uniforms to give a full performance.

Mark Ackerson, a member of the Cavaliers’ board of directors, said the idea for the “GAME ON” theme came from a Cavaliers staff member who is an avid gamer.

“He wanted to do a show that is a video game,” Ackerson said. “The show is the concept of preparing for the game. The last part of the show is the actual game.”

He said the performance at Eastern can be compared to a level in a video game, and each level prepares members of the Cavaliers for their final event.

The Cavaliers is an all-male group, which Ackerson said has been a tradition for 66 years. Because of this tradition, the group might not be able to get sponsorships if women joined, he said.

“The group started out as a Boy Scout troop in 1948,” Ackerson said.

Matt Parker, a trumpet player, said all members have to go through a long audition process.

“The auditions start in the winter and people from all over the country come to audition,” Parker said. “You audition and go to different camps then wait for callbacks. You repeat that process until you don’t get a callback or you get a contract.”

Once someone is selected to be a Cavalier, that person has to pay membership dues to participate. For some like baritone player Bayley Yarbrough, the financial aspect can be an issue.

“I made the Cavaliers last year but couldn’t do it for financial reasons,” Yarbrough said. “I tried out again and am glad to be on this year.”

After auditions are done and dues are paid, practice for the season begins. The typical preparation day begins with breakfast at 7 a.m. and rehearsal from 8 a.m. until 10 p.m.

For the 2015 season, the Cavaliers will be traveling all over the Midwest and into Texas, Ackerson said.

“We’ll start our season and end it at Lucas Oil Stadium,” Ackerson said. “We have 33 contests starting next week. They will go until (Aug. 9.)”

After the performance on Saturday, Ackerson said he is eager for the upcoming season.

“It’s going to be an awesome season,” Ackerson said. “They have set a high standard for themselves and we are three to four weeks ahead of schedule from where we were last year. This is going to be an exciting summer for them.”

Haylie Lading, of Mattoon, said she was impressed by the Cavaliers’ performance.

“They are precise, altogether cut and clean,” Lading said.

The Cavaliers’ first performance will be at 9:31 p.m. Wednesday at Lucas Oil Stadium in Indianapolis. The competition begins at 8:30 p.m.

Sydney Edwards can be reached at [email protected]