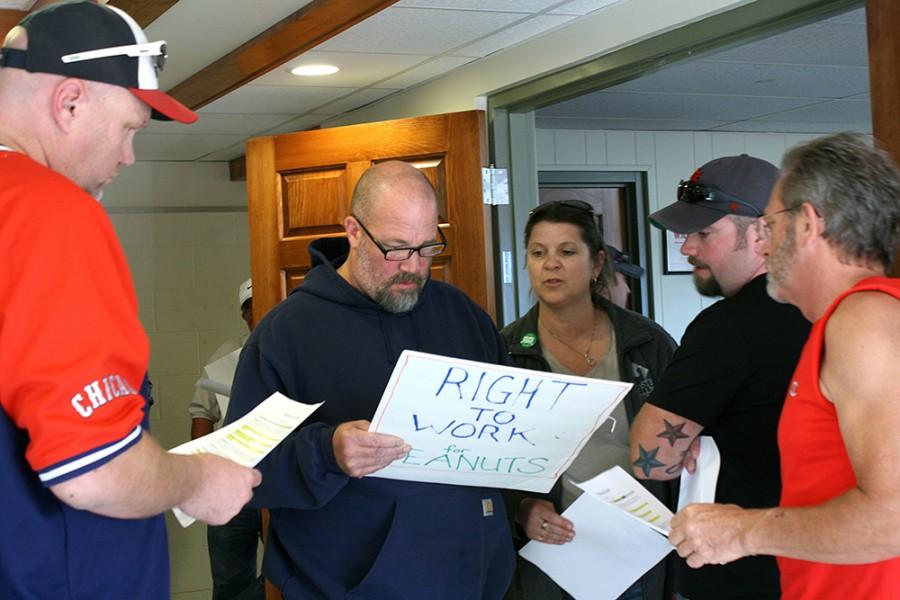 Community members gather before the Charleston City Council began. The final vote for the "Supporting Local Government Relief and Reform" resolution was 3-2 against passing the resolution.

The Charleston City Council voted 3-2 against the “Supporting Local Government Relief and Reform” resolution Tuesday after rescinding and revising the original version in previous meetings.

Community members in attendance applauded when the resolution failed to pass after Mayor Larry Rennels and councilman Jeff Lahr voted for it and councilmen Matthew Hutti, Tim Newell and Brandon Combs voted against it.

About 15 representatives from various local unions stood on the corner outside City Hall with signs reading, “Honk for good jobs” and “Right to work for less” for an hour before the meeting.

More community members poured into the packed Council Chambers as the meeting started, with many standing in the hallway for the hour and 15 minutes until it was over.

Though the council normally opens the floor for public comment after it has voted, this time people were allowed to speak beforehand.

Rennels explained before the public took the podium that the council’s intention was to improve possibilities for employment in Charleston, not to cut salaries or limit anyone’s livelihood.

Rennels said after misunderstandings about the original resolution passed April 7 and the revised version put on file last meeting, he decided to remove and reword other sections. The final version voted on was put online Friday.

“An ordinance changes things or implements things. A resolution does nothing,” Rennels said. “A resolution offers opinions, suggestions, and in this particular case, basically we’re asking the state to look at a number of items that are important to the city.”

Charles Hughes, a Charleston resident, said the part of the resolution that indicates state laws are hindering local businesses was too vague, so people could not discern what changes the council was looking for.

Marilyn Ferguson, a Charleston resident, asked the council members if they put thought into the resolution rather than based their actions on what other cities were doing.

“Joining a union is a private and personal decision,” Ferguson said. “It’s not the decision of me, nor my union brothers and sisters behind me, and certainly not you guys.”

While most public comments were against the resolution, James Di Naso, owner of The Body Club at 618 Jackson Ave., spoke in favor of it, inciting more debate from the crowd.

Di Naso said prevailing wage laws negatively affect businesses like his on the downtown square. He said he applied for Tax Increment Financing funds for renovations this year, but the city denied his request.

“I need to have some more structural work done on my building, (which is) very expensive,” he said. “Because of prevailing wage, there’s not enough money to get all these projects done anymore.”

Lahr, who voted in favor of the resolution, said he does not think anyone on the council has an agenda other than what’s best for the city.

“This resolution was an effort to say to the state as they’re revising their budgets and reducing our revenue sharing to help us with some of the ongoing expenses we have as our resources continue to be limited,” Lahr said.

Combs, who voted against it, said he has thought about the resolution so much that it was affecting him at home, and he believes all of the council members want to do what’s best for Charleston.

“I wish that even if it isn’t huge things, come out and support some of the things the officials try to do for Charleston to make it a better place,” he said. “It doesn’t always have to be a controversial issue. It’s just nice to have people here.”

Hutti, who also voted against it, said he believes the resolution addresses things that are state issues, not city issues.

Additionally, the council approved eight ordinances for Tax Increment Financing funds for local business renovations. The TIF funds total $85,077 while the remaining $102,999 for the projects will come from the property owners.

The council also approved spending $530,013 for maintaining streets and highways for the rest of the fiscal year that goes until April 2016.