Prowlin’ with Perry now a pastime 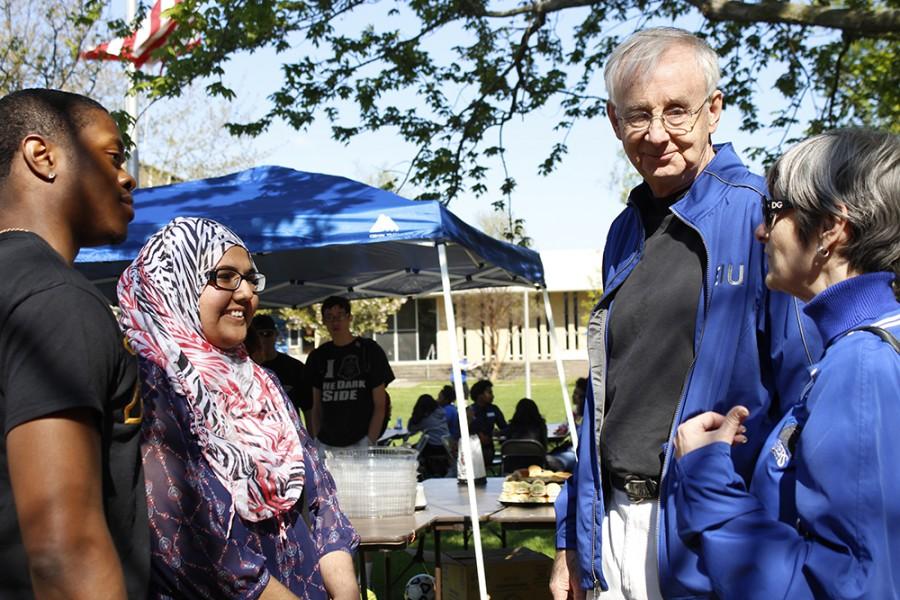 President Bill Perry clutched a farewell card he received from a student as he stood at his last “Prowlin’ with the Prez” event of his career Wednesday in the South Quad.

Students lined up by the dozens to sign a goodbye poster and have their pictures taken with Perry.

Shirmeen Ahmad, newly elected student-body president for next school year, said she was happy with the student turnout, but was struggling emotionally with this being the last event for Perry.

“I’m trying not to crumble inside,” Ahmad said. “This is it. This is the last one. This is what I’ve been waiting for, to have the students show him how much we love him before he leaves.”

Perry said he knows he still has a lot of time to see students at the commencement ceremonies next weekend and when he returns for homecoming, but he said it was still sad he was done with these events.

To have these kinds of organized events is a great way to meet students,” Perry said.

Perry is known for his interaction with students and the approachable way he carries himself.

He stood between the free Jimmy Johns platters and foldable tables in the grass, speaking to everyone standing in line and taking pictures with anybody who wanted.

Perry said it is the way he has always been. He said Eastern called his former school of Texas A&M to ask about him when he was just a candidate to be president.

“They asked this person ‘What can you tell me about Bill Perry?’” he said. “and he answered ‘He’ll be everywhere’.”

Perry said he always loved being out and about meeting with people. Universities are all about people, he said.

Ahmad said she felt like they organized well enough to reach more students than she has in the past. She said she was excited to see all the tables filled with students eating and playing bags.

“People were super excited to walk in,” Ahmad said. “People are everywhere and to me that is successful as I wanted it to be.”

Perry said he would be back from time to time throughout the year. He said he plans to make sure he visits campus anytime he is close to the area.

“This is a wonderful university with wonderful students, faculty and staff,” Perry said. “I’m privileged to have been able to serve as president.”

The different themed events allow him to interact with different groups of students, he said.

Perry said there are plenty of friends and students who he has met over the years that will keep him coming back to visit.

“Those are the richest memories that I’ll have,” he said. “All these relationships and the occasional card from a student. It really means a lot to me.”